Today was a very enjoyable day in Penetangishene. The sun came out and we had he second straight day of warm weather. It has been really cold and overcast for the most part here in Canada. Since it was so nice, we decided to clean the cockpit of the boat. It has been 9 weeks, and it needed it badly. So, we started by removing everything in the cockpit, washing it down, drying it, and putting back most of what went out. Yes, we did have some trash. 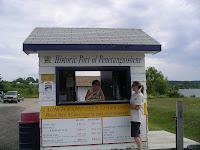 After noon, we untied the boat and motored to the town dock, a couple of miles toward town, so that we could go to the grocery store. The Grocery store, Foodland, is open 24 hours. However, the catch is that you must walk up a huge hill, and with your stuff, come back down to the city dock. 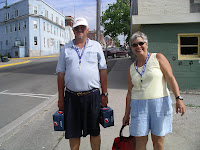 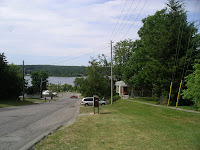 Along the way, we saw this mural on a store front and visited the huge church. There was no sign, but, we are sure it is Catholic. The church was built in 1897 and is the largest structure to be seen in the area. 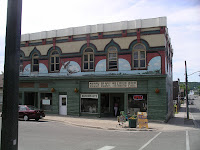 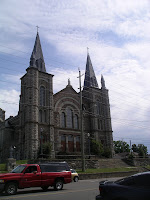 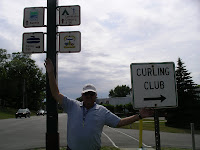 Penetangishene is the home of the Curling World Champion. It is also the home of the famous individual curling champion, Russ Howard. There is a monument to Russ and his accomplishments.
From 1900-2100, Bay Moorings hosted a wine and cheese party for the loopers. Had about 50 people there, including the staff. It was very nice and a lot of stories (true and not so true) were exchanged. Ken MacDonald, the regional manager of the Parkbridge Marinas, was our host. 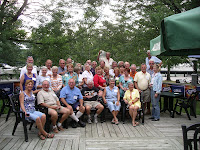 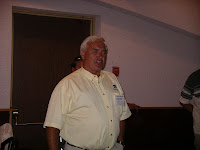