There was no blog yesterday as we were too busy exploring this wonderful city. Yes, we know that we have described several places as “happening places”. But so far, this one takes the title. Let me try to describe the city for you.

The city is very European in nature. The sidewalks are full of walkers, many with dogs. There are sidewalk cafés, small restaurants, bands and music in the streets, all types of food, from Thai, Indian, Mongolian, to McDonalds. We saw one sign that said “Chinese and Canadian Food”. We are not sure what that means. We arrived to the street and craft fair. In the background, a band from Australia is performing, one member playing a Didgeridoo, a native Australian instrument. It made a haunting sound that is supposed to reconnect the listener with nature. It was quite beautiful, very soothing. 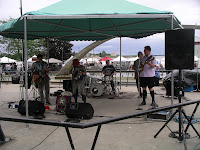 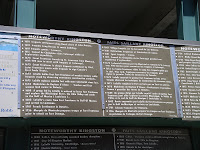 Another aspect of the city is that it is multilingual. Many people here speak French and English. Most of the signs, for monuments, directions, etc. are in both languages. Although Quebec is the French province of Canada, French is spoken almost everywhere. It is interesting to hear the people go back and forth between the two languages.

At one time, Kingston was to be the capital of Canada, and a huge government building was built. A fort was built in the 1850’s to protect the city and the entrance to the Rideau Canal, of which Kingston is the Western terminus. At that time, the Canadians were afraid the United States would invade and take control of the canal, thus controlling the region. They did not realize that we were getting ready to fight our own War of Northern Aggression, and Canada was the last thing on our mind.

Since it is Sunday, we decided to go to the Presbyterian Church, especially since it was called St. Andrews Presbyterian. We walked to it yesterday and found that the start time was 11:00. Since the church was opened in 1837 (burned and rebuilt in 1889), it is an old established city church that is huge, holding over 500. It has a vaulted ceiling and breathtaking stained glass windows. We are always a little apprehensive about going to a new church. We do not want to offend the people in coats and ties, and we surely do not want to sit in someone’s seat. We knew we had found the perfect place for us today as the minister, Lincoln, welcomed us in clerical robe and collar and blue and white tennis shoes. He immediately noticed that I was wearing my St. Andrews shirt, so we explained that we both went to St. Andrews College in North Carolina. He gave a very well thought out sermon on King David and the necessity for giving God the credit when accepting his gifts. They had a fellowship time afterward. Needless to say, we took part in that. 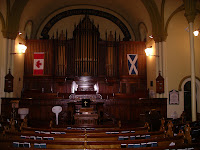 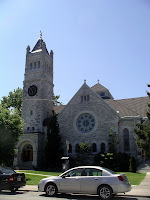 (Betsy, the musician, speaks) The pipe organ was original to the 1889 church building and is incredible in both sight and sound. They have a long organ prelude, then an organ postlude that people sat back down to listen to after the benediction. The organist really let loose on the hymns (we sang 4, and only one, “Majesty”, had I ever heard before). Each verse was played differently on the organ, with much flair. The choir was off for the summer, so they had a wonderful soloist, a baritone, that sang two solos: one by Joseph Haydn, and the other was “How Great Thou Art” right out of the hymnbook…beautiful. They offer organ recitals every Friday at noon during the summer months. During the rest of the year, they have a hymn sing every Sunday evening. In addition to the weekly bulletin, we were provided with a sheet of “sermon notes”…I really liked that idea. 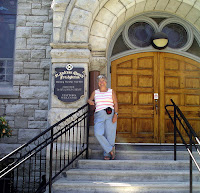 Another thing I as a musician have really enjoyed about this town is all the music. There are buskers (street entertainers) on nearly every corner, playing guitar and/or singing, a young fiddler, etc. They all have a bucket or had out for coins, and many say they are earning college money. The “Busker’s Rendezvous” will be held in 2 weeks, and I’d love to stick around for that…there will be mimes, musicians, jugglers…all the kind of things I love about New Orleans. There has been nearly constant music in the park adjacent to the marina, and none too loud…just easy listening stuff as Rick mentioned.

This is truly a wonderful, lively, beautiful city. And just a few blocks away are lovely old neighborhoods with incredible architecture. It seems so different than the cities we are used to in the US. I’ve seen no street people, and just one or two people quietly and politely asking for a “few extra coins.”

(Back to Rick speaking) FYI: Canada is divided into provinces, much like our states. Ottawa Is the national capital, and each province has a capital. The capital of Ontario Province is Toronto. The Canadians have income tax, much like the US, but in addition they have a hefty 13% sales tax on almost everything. This is 5% General Sales Tax (GST) and 8% Provincial Sales Tax (PST). And, of course, everything is quoted with no tax, so your bill is always 13% higher when you pay. By the way, they just reduced the tax from 15%. In Canada the smallest denomination of paper money is $5.00. They have a dollar coin with a picture of Queen Elizabeth II on one side and a picture of a loon on the other side, referred to as the “loonie.” The two dollar coin is referred to as a “toonie.”

Across the bay, on an island are about 100 windmills. When the sun hits them just right, it is a beautiful sight... 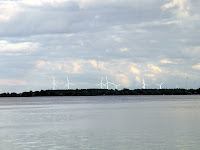