Rick speaks. We got up this morning and had breakfast at a local restaurant with our “new best friends” John and Gail, residents of Bobcaygeon, ON. They have been very helpful to us as they are just finishing the loop after 2 years. They are going to have some adjusting to do after being on the boat for so long. They are a wealth of information. 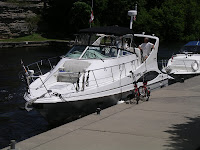 We left Bobcaygeon for Fenelon Falls. There, tied to the lock wall, were Jack and Pia Griffin on board the boat “Still Busy”. We had met these folks, from Charlotte, at the rendezvous in Charleston in April and they have been about 3 weeks ahead of us. However, they went to Ottawa and Montreal and came to Kingston via the Rideau Canal, so we caught up with them. We had a grand old time catching up. Afterward, we toured a very nice museum, dedicated to the town of Fenelon Falls. This is a tourist stop, for all types of folks, including boaters. There are about 10 ice cream shops and 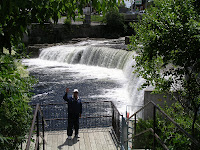 When we returned from eating and visiting the museum, we found, as several people told us, that a houseboat entering the lock had been attacked by the wind and had run into our boat as it was tied to the wall. Fortunately, there was no damage. One bystander had jumped onto our boat and pushed the attacking houseboat away before any damage was done.


We made our way to the next lock, Rosedale. As we left the lock, the port engine would not go into gear and at the same time, the steering wheel seized up. We immediately thought that the houseboat had done damage and we were just now finding out. But, we had just been across a large lake, with no problem. So, we raised the motors and found that one of our lines had gone AWOL, jumped out of the boat, and committed suicide by become wrapping itself on the port prop. Rick cut the offending line, cleared the prop, and off we went. Moral of the story. It is not always perfect each and every day. There is some stress, some days.

We cross Balsam Lake and according to the GPS, we reached the highest elevation we can expect, 852 feet. From now on, we will be going down, and the locks will be much easier to negotiate. 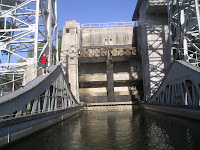 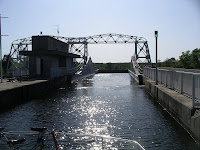 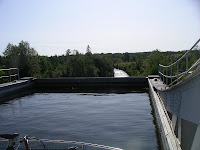 We easily negotiate Trent Canal. This canal is carved from rock for several miles and one does not get out of the channel. It is only about 40 feet wide and 7 miles long. Then, we get another highlight. We ride the Kirkfield Lift Lock. This lock is like the Peterborough Lift, except it is made of steel, not concrete. However, we start out up top, and look out over where we are going as we descend 5 stories. We were the only boat in the lock, and it was a thrill. 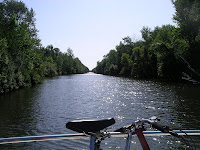 We then navigate the Trent Canal more and come to the “Hole in the Wall” bridge. The picture speaks for itself. All of this afternoon has been in very closely marked narrow channels. Some of the markers look like airplane runways.

By 1800, we arrive at Sunset Cove Marina. We decide to stay here as we need a shower after two days on the lock walls. It is an old marina, but they have what we want, hot showers.

Remember, you can click on any photo and make it bigger to enjoy.