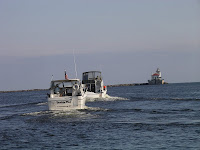 Betsy speaks: We departed Oswego this morning at 0800. It was sunny and calm, and we had two boats with local knowledge to lead us almost to our destination on the other side of Lake Ontario, about 50 miles away. We had met these people the day before staying at the same marina where we were docked. They said they generally travelled about 24 MPH, and we said that would suit us just fine. We managed to keep up with them, but as loaded down as we are we were really struggling to keep up! Although the seas were as calm as could be expected on such a large body of water, we did roll a bit and would have been happier going about 5 MPH slower. But we made it to the other side in fine form, and our escorts were kind enough to lead us right up to the town dock at Clayton, NY. This was about 15 miles short of our final destination, but made a good lunch stop and gave us the opportunity to walk around this lovely little town. One of the “escort” boats live here, and the other intends to move here upon retirement. 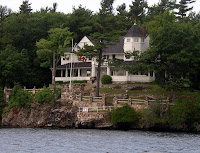 After using up nearly all of our allotted 3 hour free dockage we headed for Alexandria Bay, a little farther up the St. Lawrence River. Our original plan did not include this leg (most loopers go straight from Oswego to Kingston, Ontario), but this is where we’ve made arrangements to have the motors serviced tomorrow. It turns out to be a very good thing, because we are seeing things loopers that go straight to Kingston do not see and it is just lovely. We are on the St. Lawrence River in the Thousand Islands area, and it is easy to see where that name comes from. There are little rock islands everywhere, most with several nice houses on them. Access is by boat only on most of them, but they do have power, and roads I presume. I can’t describe how pretty this area is. 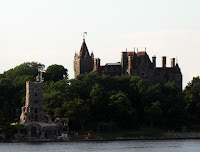 Directly across from our marina is Boldt Castle, quite an imposing structure that we hope to visit. The 6 story, 120 room castle complete with tunnels and a drawbridge was started in 1900 by George Boldt, millionaire owner of the Waldorf Astoria Hotel, as a token of his love for his wife. When she died suddenly 4 years later, Mr. Boldt called the men working on the castle and ordered all work to be stopped. He never returned to the island. The castle was abandoned until the 1977, when the Thousand Islands Bridge Authority took it over and spent millions on rehabilitation for the public to enjoy. 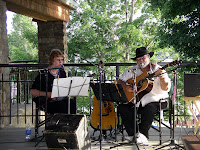 I saw in brochure that there would be a concert in the park tonight at 7PM. I thought that sounded like something fun to do, so we rode our bikes to town, had a quick dinner and went to the Scenic View Park to enjoy the concert. We had no idea what kind of concert it was going to be. Turns out it was a husband and wife team playing bass and guitar and singing bluegrass music. The funny thing was this park is right next to a hospital. As we arrived, we saw several people being pushed in wheelchairs from the hospital over to the park, and there were many patients already there. We leaned our bikes up against the open air building and I asked Rick if we should lock them up…he sort of laughed and said most of the people here already had their own wheels and we shouldn’t worry about the bikes!

Anyway, lover of bluegrass that I am, I thoroughly enjoyed the music. It was a perfectly beautiful setting overlooking the water, and we enjoyed a beautiful sunset.

Tomorrow I’ll spend the day walking around this charming town while the engines get serviced (I hope).