[Rick] We were expecting some bad weather, so we made no attempt to get going early in the day. As the morning progressed, the weather got much better and at 1145 we left Bay Moorings in Penetangishene for the fabled Georgian Bay. This is, by all accounts and stories, the place you have to go on the loop. When we first started talking about the loop, we were going to go the entire length of the Erie Canal, and not go into Canada. But, so many who had done the loop told us we just had to see Georgian Bay and the North Channel. So, we changed our plan and came on this route. 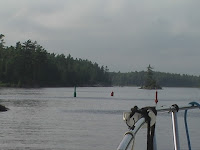 It really is the land of 30,000 islands. Legend has it that an Indian giant, spurned by the love of his life, grabbed up a handful of earth and tossed it onto Lake Ontario, creating the 30,000 islands. Today the Georgian Bay adventure begins. 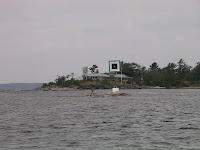 Along the way, we witnessed hundreds of islands, many with homes built on them. Most of these are weekend homes, but several looked to be permanent dwellings. There are many submerged rocks, and hence lies the problem. If you see the rock, you can avoid it. However, many have ledges, under the water, much like icebergs. So, the captain and the lookout must he attentive at all times. 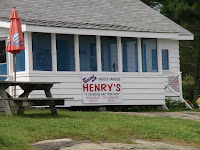 We motored behind, in front of, beside hundreds of islands on our way to our first stop, the town of Sans Souci, on Frying Pan Island, arriving at 1445. This is the home of the “world famous” Henry’s Restaurant, home of the “the world’s best customers”. Since it is on an island, the “parking lot” is the floating docks where boats and floatplanes motor in and tie up. When we tied up, I inquired as to where to go to settle our bill, and was told that they would take care of that later, just go on inside and have lunch. So we did. While certainly edible and plentiful, it was not spectacular. After lunch, we found the restrooms, but did not find the showers. I mentioned to Paul, the head honcho, the reason we used marinas instead of anchoring was for the shower/restrooms. He said nothing. Then, about 1800, a young man came around to collect for dockage. I told him we had found the restrooms, but not the showers. He indicated that they no longer have showers since “some people had been abusing them”. I told him that we would not have even considered overnight if we had known there were no showers. We talked it over and decided that $1.50 per foot and no showers was a bad deal, and since the next place to stop was only 15 miles away, we were outta there. I do not think the person at Henry’s lied to us, but they were certainly not forthcoming, especially since the young man indicated they knew the guidebooks said they have showers. So, our recommendation for Henry’s Fish Camp is that it is a day stop, eat some fried fish, and move on to Parry Sound. Except for a walking trail to a monument to Champlain, there is absolutely nothing else to do on the island. 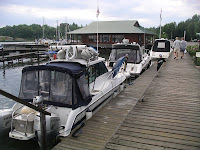 So, at 1815, we depart Henry’s heading to Killbear Marina in Killbear. Our original plan was to take an inside route to Parry Sound, explore there some, and then end up in Killbear. Since we ended up leaving late in the day instead of the next morning, we bypassed Parry Sound by using a more direct route. In just over an hour, we arrived at Killbear Marina, docked on the wall and had a wonderful evening. The only problem at Killbear is that your cell phone will not work, and more importantly, your air card will not work and there is no internet of any type. There is a PAYPHONE in the lobby of the restaurant. Tomorrow’s blog listing will give more details about the marina. 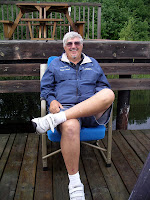 Someone wrote to ask if we Twitter. The answer is NO. Between the blog, the log, posting pictures, charting tomorrow’s route, and playing captain, we do not have time, even if we had the internet connectivity.
Rick is too busy to Twitter.......