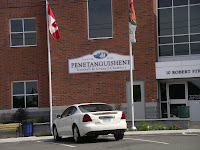 [Rick] Today is Thursday and this entry will catch everyone up for Wednesday and Thursday. Wednesday was basically a chill day. We read, chatted with our boating neighbors, and generally did nothing productive. In the corporate world, we recharged our batteries. Wednesday evening gave rise to the cookout provided by the Bay Moorings Marina. The fine feast of hamburgers, hotdogs, corn on the cob, and salad was enjoyed by all. The best part was a presentation by Ken MacDonald about our upcoming trek into Georgian Bay. Ken is knowledgeable, funny, enthusiastic, and gave a great talk. He was also doing a little selling, but it was very subtle.

Thursday, many of the boats moved on to Georgian Bay. It was raining very hard when we got up, and rained off and on, hard and sprinkle, for the most part of the day. We may get caught in the rain, but we are not going out into the rain, the first thing in the morning. Makes no sense. So, we read, chatted with our boating neighbors, and generally did nothing productive. In the corporate world, we recharged our batteries. By late afternoon, it cleared up and we were able to get off the boat and walk around. We had dinner with Maurice, of the Quotidian, and Terry of Frankly Terrific. Her husband’s name is Frank, her name is Terry, get it!!!!!. After supper, we went aboard the Frankly Terrific and had a chart marking session. We planned the route for the first 6 days of Georgian Bay, marking the charts in highlighter. We planned where we wanted to stay, when to leave, etc. All of this is subject to weather.

We plan to leave tomorrow, Friday the 24th, and be in Little Current around next Friday. We will see. Sans Souci, Parry Sound, Bad River, Byng Inlet, and Kilarney await our arrival. Come back and see how we do.