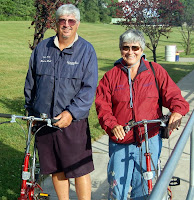 Betsy speaks: We left Kingston about 10:00 this morning after a heavy downpour with much thunder and lightning last night. Poor Beamer doesn’t fare well in thunderstorms! It was sunny and calm, and we had an easy 72 mile trek to Trenton, arriving at approximate 2PM.

We were thrilled to be docked next to our friend Maurice McGough, who we’ve been trying to catch up to for several days. We first met Maurice at the AGLCA (America’s Great Loop Cruising Assoc.) rendezvous in Charleston in April. His little 21 foot Ranger Tug was docked right in front of us there. His boat has a tiny, tiny, tiny cabin, barely room for one person. He is doing the loop solo. He began the loop at his home on the Florida panhandle, so has already done the part we are probably dreading the most, the long open run across the Gulf of Mexico. There have been several times during our trip that we’ve thought of Maurice and wondered how he was doing and whether he was still going strong or had decided it was too much for a lone man in a tiny boat. We weren’t sure if he was ahead of or behind us, because I knew he was going to go up the Potomac to Washington, and I didn’t know how long he had stayed there.

Anyway, I decided to e-mail him after we crossed Lake Ontario to see how he was doing. He immediately e-mailed me back and we discovered he was just a couple of days ahead of us…he was in Kingston when we were in Alexandria Bay. His e-mail was very short and he didn’t tell us what his schedule was. Then, a couple of days later, as we were entering Kingston we saw what we thought was his boat leaving Kingston in the distance. But it was a nasty, windy day and we couldn’t imagine that it was really he heading out at that hour. So I e-mailed him again that night, and sure enough, he had left Kingston just as we arrived. 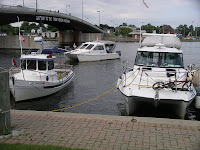 Now, 4 days later, we pulled into Trenton, Ontario. As we were gassing up prior to docking for the night I asked the dockmaster if he had seen the little boat “Quotidian” and he said, “yeah, he’s right over there.” So we are now docked next to Maurice and we had a wonderful dinner with him to compare war stories on small boats. Also at this marina is one other looper, and believe it or not, they too are smaller than us. So for once, and probably only once, we are the largest looper in the marina! Here’s a picture of our boat, next to Maurice’s boat, with the 3rd little boat, a 24 foot Sea Cat in the background. Yes, we’re the big boat!!!


We will stay here one night and enter the much anticipated Trent-Severn waterway tomorrow morning. I’m sure you’ll be reading more about the Trent-Severn in future issues.