[Rick] Well, it was a big day. We traversed the Railroad Lift at Big Chute. It was very thrilling. We got up a little early and were second on the Blue Line for entry to the chute. At 0830, the loudspeaker called the first boat, Meander, into the carriage and we were the second boat into the chute. The lockmaster said that they had a Glacier Bay last week and did not use any of the straps, just let it sit on the bottom. I told him that was fine with me, and so, that is what we did. The carriage started to move and up we went. Here are several pictures of the event. 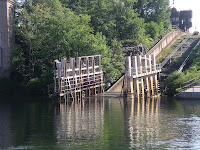 The chute in the water and ready for entry. 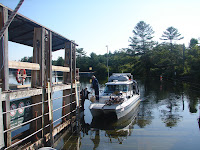 We load up, easing gently onto the carriage of the chute. We just sit on the bottom. No Straps. 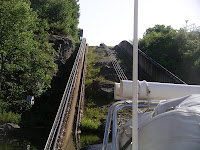 Looking Up before we start. 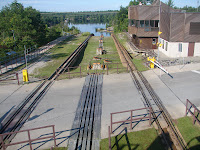 Going up and crossing the road. 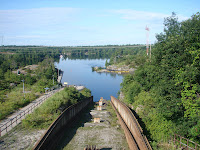 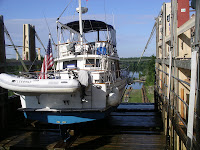 Meander in front of us. Note the straps. 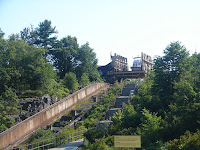 View from the bottom, before we descend.


Once over the Big Chute, we went to the town of Port Severn, and the last lock on the Trent Severn Waterway. We have now done 44 locks on the waterway and a total of 72. Leaving the lock, we encountered some of the narrowest channels we have ever seen. Also, the channel marker reversed themselves, now Red on the right and Green on the left. We literally snaked our way through very narrow channels until we could get out into open water and head for the town of Penetanguishene, ON, and the Bay Moorings Marina. 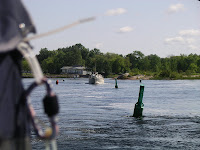 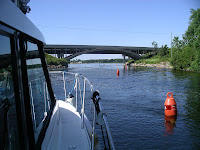 Bay Moorings is one of three very large marinas as well as a town dock in a very busy boating community. Bay Moorings has over 400 slips and most were full. This is one of the nicest marinas we have seen. The restrooms/showers are fabulous and earn our highest rating so far. They are clean, private, secure, drain well, have hooks, a heater, and anything else on the list. The docks are fixed, not floating, but they stagger the finger piers, a high one then a lower one, so that they can accommodate most any boat need for getting off and on the boat. There is only one boat per slip, so, you can back in, forward in, and have no fear of hitting anyone or anyone hitting you. There is a ships store, a motel, restaurant, pool, exercise room, and most everything you could ask for.
We are here for a gathering of loopers before heading for Georgian Bay and the North Channel. Bay Moorings is having a wine and cheese party for us on Tuesday and a Barbeque cookout on Wednesday. We plan to leave on Friday for the two week jaunt into Georgian Bay. 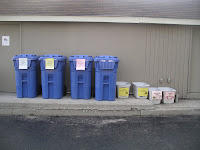 Also, we have talked about the Canadian obsession with recycling. In Canada, beer is purchased in The Beer Store, a separate entity, run by the government. Since every can and bottle of beer has a 10 cent deposit, people bring their empty cans and bottles back to the Beer Store for refund. The sign says that everything purchased in The Beer Store is recyclable and on average, they reclaim 96% of the bottles and cans sold. Quite a record. This explains why we see people taking cans and bottles out of any trash. They are taking it back for refund.