Betsy speaks today: We spent three great nights in the city of Peterborough, the largest city we’ve seen since Kingston, Ontario. The marina is right in the center of downtown, near grocery, shops, hotels and restaurants. We did a lot of bike riding here, nice flat land with wide sidewalks made it easy. Here is Rick leading the way…he looks great from the rear!

The marina is right next to a sizable park. We returned to the park one afternoon and right near our boat was this man playing a Romanian Pan Flute. For the first time on this trip I went to the boat and broke out a couple of harmonicas and went back and played with him a little while. I think Amazing Grace was the only thing we both knew all the way through, but we kind of played off each other with various other tunes. He had 2 pan flutes with him, an alto and a tenor. Both were beautiful instruments, which he said only improved with age 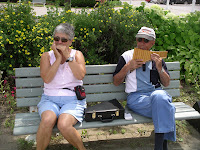 (unlike a harmonica). He said you can get an “inexpensive” one for a couple of hundred dollars (you can get a really good harmonica for about $25, so when it wears out with age you just throw it away!). He said most people have a hard time getting a sound out of the pan flute, but since I used to play the flute and since he offered to let me try, I gave it a shot. I immediately was making pretty good music and played a couple of tunes…the concept is just like playing a flute which helped me as opposed to someone who has never played a flute. It is a very simple instrument, really. We 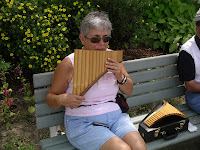 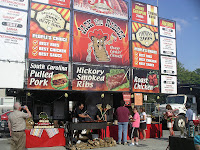 Friday night we went to the annual barbecue ribfest just a couple of blocks from the boat. Many vendors were cooking ribs. There was live music and very expensive beer available…$2.50 for a 6 oz. Dixie sized cup of beer. We bought a plate of food, and I bought 2 beer tokens before I realized how tiny the beer servings were. We took the plate back to the boat to eat because it was so crowded and noisy and I had cheap beer on the boat! I thought it was funny that one of the places was advertising “South Carolina Barbecue”…remember, we are in Canada! 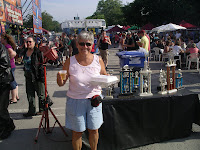 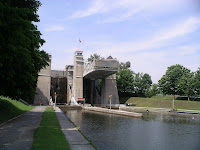 Saturday we rode our bikes a couple of miles to see the Peterborough Lift Lock that we knew we would be going through the next morning. This is one of the highlights of the trip that we had heard much about. Completed in 1904, this is the world’s highest lift lock, constructed of unreinforced concrete. There are only 2 lift locks in North America (we will go through the other one in a couple of days, going down instead of up). There are 6 other lift locks in Europe. There is a very nice visitor’s center adjoining the lock where we spent some time learning the history of this incredible structure. The left chamber is down, the right chamber is up in this picture. 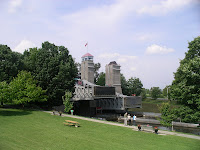 In this picture, the chambers are moving, the left one up, the right one down. 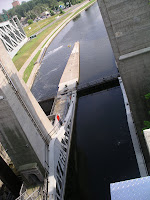 This picture is taken from the top, looking down! 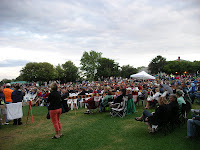 Saturday night the was a concert in the park right next to the marina. Thousands of people attended to hear a U2 tribute band. Not my kind of music, really, but a fun time anyway. Hot dog, popcorn, cotton candy vendors set up all around the perimeter. We got something to eat and listened to just a few minutes of the concert, then joined some other loopers on their boat and just listened from a distance as we shared looping tales. 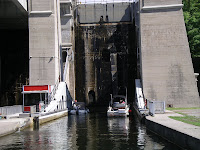 Finally this morning we left Peterborough and actually entered the lift lock. Here is a pictures taken as we approach the lock, going into the right side chamber along with 2 other boats. 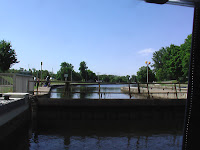 The lock consists of two “tubs”, one of which goes up as the other one comes down. Several boats can fit in each chamber…as mentioned, we were in the chamber with two other boats. Fortunately, we were the last boat in, which meant we got to look out the back of our boat as the lock rose us up. The lift is totally hydraulic, operating only by gravity…no electricity involved. Once the boats are in place, one foot of water is added to the upper chamber, thus causing it to fall as the lower chamber rises, sort of like a seesaw. Because of physics and displacement and all sorts of other things I don’t understand, it doesn’t matter what the boats in the chambers weigh, only that there is more water weight in one than in the other. This picture is taken looking backwards from our boat before we began to rise. 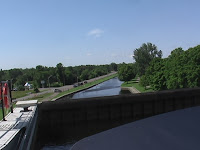 This picture is taken about midway up. 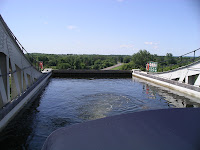 This picture is taken from the top as we pulled out. 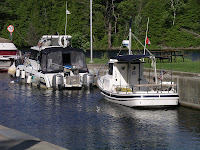 We then travelled a total of 16 miles the rest of the day, going through a total of 8 locks. Very slow going! We stopped in the town of Lakefield and stretched our legs after eating lunch at a picnic table next to a lock. Then went a few more miles and stopped for the night at a lock wall not in a town, but with a couple of restaurants and shops that have just built up around the lock. Our friend Maurice on his little Ranger Tug is tied up behind us again, so we enjoyed his company for dinner again. 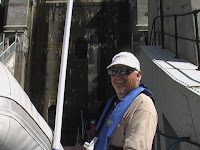 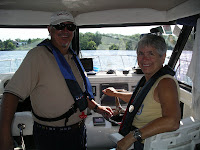 Taken by a friend that rode a little way with us. 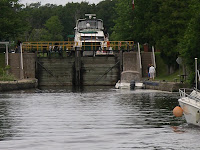 Here we are waiting for a lock that already has a boat in it coming from the other direction. We haven't seen this very often, as most boats are heading the same way we are. This being a weekend, there were some locals out today, thus more activity at the locks. 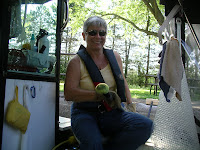 Betsy doing her job of keeping the stern off the wall as we lock up.