Betsy is writing today’s Blog because she has nothing else to do! We stayed at Killbear Marina an extra night (Saturday) because of weather, and it looked like we might have to stay again. But we were anxious to leave because even though it was a pretty setting, the restaurant was way too expensive and the food was not to our liking anyway, we had no TV (which we’ve pretty much lived without throughout the trip) and no internet, even with our air card. So when the clouds started to clear mid-morning on Sunday, we decided to make a run for it. Our destination was Pointe au Baril, approximately 30 miles away, all inside amongst the rocks.

Here’s a picture of Beamer, depressed after days without sun. (Remember, her full name is "Sunbeam Chaser!" 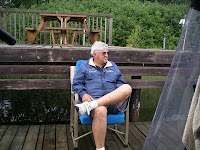 And here’s a picture of Rick, depressed being stuck here with nothing to do.

Once we pulled out, the sky did clear for a while, and we carefully worked our way through what is called “Canoe Channel.” Could that name be because it is so narrow nothing but a canoe should pass through it? But it is the marked preferred route, so we had no choice. This red and green combination lets you know you are 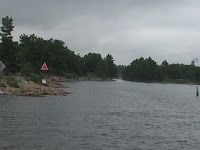 heading in the right direction! Look at the tiny channel ahead...that break in the trees (remember you can click on the image to make it larger, but that does not make the actual channel any larger for us!)

The next image is as we approach the entrance, and then a picture while we are actually in the channel. I was sitting on the bow at this point, and was glad that the water is so clear you can see that the rocks go straight down on both sides. The charted depth is about 8 feet, but it is the narrowness that is scary. And our 8.5 foot beam is much smaller than most boats that do this!!! 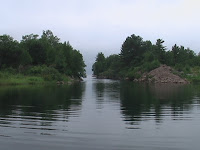 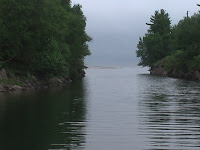 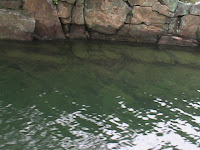 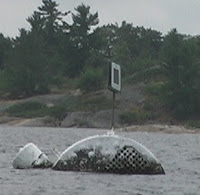 Right after making it through Canoe Channel, the rains came in torrents but visibility was still fairly good and we do stay dry in our cabin so we continued on. The rain lasted about 15 minutes or so, and then the clearing began again. Right before reaching our intended destination we passed this marker that we had been told to look for: it is the boiler of a large boat that hit a rock here years ago and sank. The marker is now right on the boiler as a reminder of how careful you have to be!

Around the next bend was the marina that we had been told was now accepting transients, and that we wouldn’t have any trouble getting in to because it was a well kept secret. Well, it wasn’t a secret this weekend! There were hundreds of people on the bank leading up to a grand hotel, and the docks were jammed full of “cottagers,” the term for people that own these cottages on these islands. There must have been some kind of festival going on, and the marina wouldn’t even answer our call on the VHF radio. By now, approximately 1300 hours, the sky was sunny and the wind was calm.

So now we had a choice to make. We could go farther up a channel inland and hope to find a place to stay (there were several options), or make the outside run to Byng Inlet, about 17 miles total. We decided to make the outside run, and it was a good decision. The sky was sunny the whole way and the seas were very comfortable swells at a most favorable angle.

In spite of the nearly continuous bad weather, when we are able to travel we see nothing but beauty. We are still amazed by the houses built on rocks, or the single house on an island by itself. I spoke to one of the “cottagers” yesterday (she was doing her laundry here at the marina). Her house is on an island by itself that her husband’s grandfather bought in the early 1900s from the Canadian Railroad Company for pennies an acre. Hers has no power other than solar panels and propane. Like those of us that knew the old Topsail Beach style of living with no telephone, no 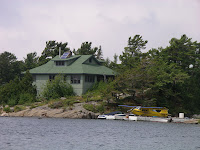 video games, no TV, she is glad her children enjoy coming to the island in the summertime, getting away from those things and enjoying the basics of nature and wildlife. She says most of the islands that are privately owned have been in the same family for generations, and that it is extremely hard to buy an island today. She said that the vast majority of those that don’t have structures on them belong “to the crown,” and as such are part of the Canadian Parks System.

Still, we marvel at the lone cottage with all the “toys”…note the boat, the floatplane, etc. in this picture. 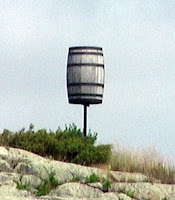 Going out the Pointe au Baril inlet we saw where the name came from! There is a barrel on a rock. Nearby is a sign explaining that before the days of reds and greens like we have today, the channel was marked with barrels, and this is a picture of what that would have looked like right at the entrance to the channel. There is also a lighthouse here now, but apparently these barrels marked the channel even before the days of lighthouses.

We arrived at Byng Inlet, which takes you into the tiny town of Britt, about mid afternoon. The channel leading to Wright’s Marina in Britt is narrow and beautiful, and the sun was still shining. I have to mention this because we are seeing so little sun! 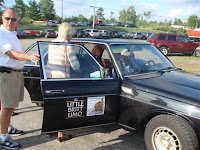 Last night we went with two other loop boats that are here to a local restaurant…they were nice enough to pick us up, even though it took two trips with the six of us. We were impressed by the candles on the tables…made out of old propellers! The food and the service were not that impressive! But we had fun and it is really the only place in town. 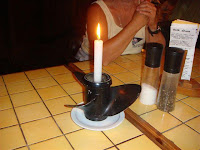 After returning to our boat, the bugs last night were as bad as any we’ve seen. It seems that every night there are more and larger mosquitoes. I think that Rick swatting them with the fly swatter is making them procreate all the more!

Our plan was to leave this morning, go outside again for a 20+ mile run to Collins Inlet which

would take us through another fjord like channel to Killarney. But again, the weather is not cooperating. We are bundled up against the cold, rain threatens constantly, and not only are the winds blowing, they are blowing out of the worst direction. Weather reports make it look just as bad for tomorrow. Earlier I showed pictures of Rick and Beamer being depressed individually. Now they are depressed together…this is not a staged picture! It is real boredom setting in. Maybe leaving Sneads Ferry on May 18 in the rain and cold was an omen. Even the Canadians are complaining about what a lousy summer it has been…they are very apologetic, as if they could do something about it!

Look on the bright side: We haven’t hit a rock hard enough to do any damage...which reminds me...let me backtrack a bit. Way back in Trenton, at the very beginning of the Trent-Severn Waterway, we met the boat "Whiskers," a power catamaran even smaller than we are. You may remember the picture of them and Maurice's boat "Quotidian" along with us, and we were so proud to be the biggest boat in the marina for a change. Well, Whiskers (not members of the official looper association) went on ahead of us, and ended up getting to Killbear a week before us. As they were leaving Killbear, moving at about 10 MPH, they hit a rock and ruined the lower units of both of their outboards. They have been at Killbear for a week, and expect to be there another week waiting for parts and insurance settlement. Remember, Killbear is where there is no phone, no internet, no TV, one very expensive restaurant, and nowhere to go. Needless to say, Linda and Deke on Whiskers are bordering on deep depression. She is barely speaking, he prattles on non-stop about that stupid uncharted rock that he came 2,000 miles to find. And remember, they're on a boat smaller than ours and its been raining a lot!

SOOOO, we have much to be thankful for. We are still enjoying ourselves for the most part. I’m getting a lot of reading done (right now I’m in the middle of re-reading The Heart is a Lonely Hunter which I had read in high school).

Don’t look for any more blogs until the skies clear and the winds calm!!