[Rick] As much as we liked Savannah, we had decided to leave Savannah because we were getting beaten up at the face dock. As we left, we measured the current between 4 and 5 miles per hour. The real problem was that every passing boat, of any size, waked us and really rolled us. As we left, the wind was about 20 mph and the temperature was in the low 40’s. But, the sun was shining and we are fully enclosed, so it is not too bad. The trip to Beaufort is only 48 miles. 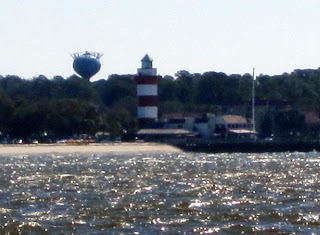 We passed Hilton Head and the Hilton Head Lighthouse. This is a very affluent island and the size of the houses indicates this fact. The marinas are full of huge yachts. Many loopers stop at Hilton Head, but we decided to bypass it this trip because we’re trying to outrun the awful weather conditions. 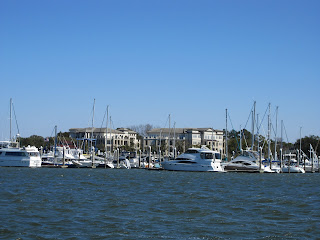 After passing Hilton Head, we entered Port Royal Sound. What should have been an easy ride was not comfortable today since by now the wind was gusting up to 30 MPH. Choppy waves were 3 to 4 feet and either right behind us or on our beam, making for a rocky-rolly ride. In other words, Port Royal Sound was Port Royal Pain today.

We finally arrived at the Beaufort Downtown Marina. The wind was fierce and made it hard to dock. With the wind and the 50 degree temperature, the chill factor was about very cold. We pumped out and filled up with gas, charging another $550 to the credit card. The attendant gave us a choice of slips and indicated that if we took one of two near the outside of the dock, we could have cable TV, whereas the ones a little closer to land had no cable. Sounded like a no brainer to us since we’ll be here for several days and Survivor is on tonight. Also, the wifi repeater is about 30 feet away and we have a great signal. As soon as we got tied up, we took the courtesy car to the grocery store. It appears that we will be here for 2-4 days.

We visited Beaufort on our small ship intracoastal cruise back in 2003 and have looked forward to coming back here ever since. Betsy said we will stay until the weather gets warm. We then saw the weather forecast that calls for unusually cold weather for the next 10 days. I think she is re-thinking her time period. At this point, we still plan to be in Topsail Beach on March 12th or 13th, and in Sneads Ferry on Sunday, March 14, 2010 around 1400.