[Rick] The first thing this morning we arranged for Enterprise Rent-a-Car to pick us up and we rented a Ford Focus for a week. We decided to go ahead over to Cape Canaveral and the Kennedy Space Center. This is where the Space Shuttle is to be launched on Sunday Morning. We had already heard that this is a two day tour. Upon arriving, we decided to take the bus tour of three attractions. The hop on/off tour takes 3-4 hours. 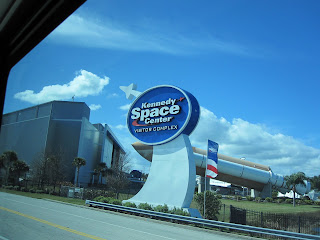 The first stop on the tour was the Gantry Stop. This is a three story metal structure that overlooks the launch pad. The shuttle, STS 130, is already on the pad, having been moved there last month. From the gantry, one can see the tower, but the shuttle is on the back side and is barely visible. There are several signs that explain what you can see and what all of the features are. 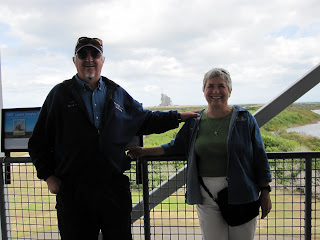 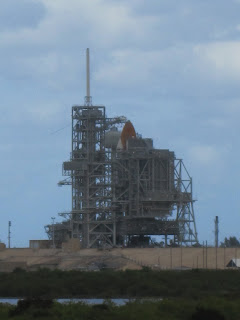 On the way to the second stop of the tour, we passed very close to the shuttle mover. This is a huge platform that moves the module from the Vehicle Assembly Building to the pad. The top speed is 1 mile per hour and it usually takes about 8 hours to move the shuttle to the pad. There are 8 treads of 57 units on each tread.

We once again pass the Vehicle Assembly Building. This building, 535 feet tall and one story, is the second largest one story building in the world, by volume. It is so large that without the proper ventelation, the building will create its own weather pattern, and in fact rain inside. Another example of the size of the building is that the new Yankee Stadium would fit on the roof with 10 acres left over. 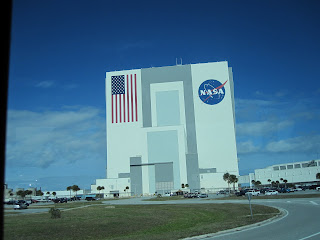 
The second stop on the tour is the Saturn/Apollo building. This, via displays and movies, tells the historic story of the Apollo program, the moon landing missions. There is a moon rock that you can touch and the actual Apollo 14 command capsule. The length of the building is comprised of an actual Saturn rocket. This rocket is 565 feet long and comprised of 4 stages. The solid rocket fuel for one launch creates enough energy to light New York City for 2 hours. 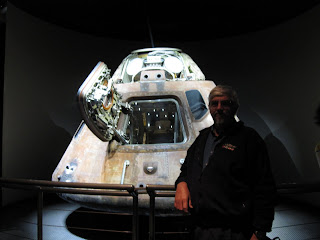 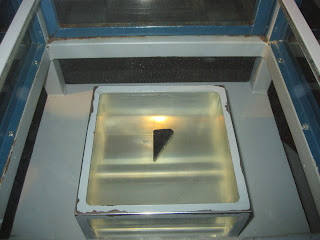 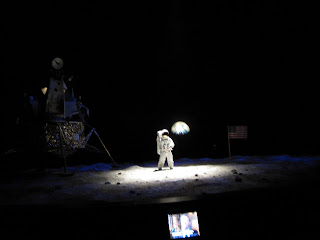 Scene from the Moon 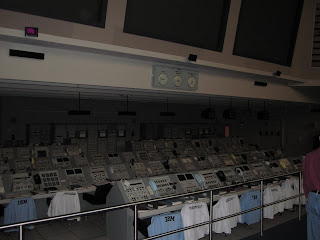 The original control room for Apollo 8-17.

From here, we returned to the visitor center. We watched a 45 minute IMAX film about the International Space Station and the cooperation among the 16 nations that are participating in the project. These include Canada, India, Russia, France, and China and the USA.

The launch is scheduled for 4:39AM Sunday morning. Anyone on the east coast might want to hop out of bed and try to see it, especially if you are on the ocean. It will launch in a northeasterly direction, and on a clear night should be visible as far north as New Jersey.