[Rick] We continue our tour of St Augustine today. We have seen the Oldest House, The Old Jail, The Old School, The Oldest Fort, The Fountain of Youth, The Oldest Church in America, The Old Wall, and the Oldest Putt-Putt Golf Course in Florida (:-}). The best news is that all of this can be seen very easily reached from the marina. One can walk to each of these places and many others. St Augustine is easily navigated on foot or bike. We suggest that one take the $17 tour trolley that stops in 22 different locations. Hop on and off. The tour is good for 3 days, so you have a great chance to see everything. But, if you do miss something, walk back and take it in. St Augustine is a must stop on the loop and one cannot ask for a better location than the marina to be in the middle of it all. 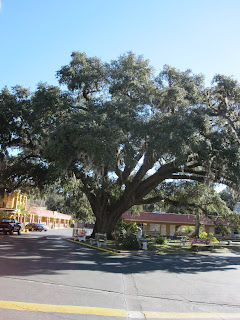 Today, we hopped on the trolley and went to the stop to shuttle over to the lighthouse. Along the way, we passed “The Old Senator”. This tree is over 600 years old and was here when Ponce de Leon arrived in Florida in 1513. 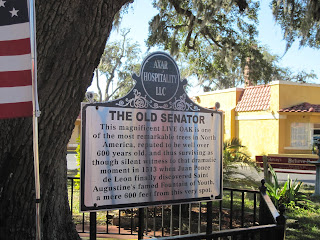 Ponce De Leon was looking for the mythical Fountain of Youth. He did not find it, but it is now located in St Augustine! Tourists flock by the busload to visit the grounds and taste the water. It is just down the street from Ripley’s Believe it or Not. Believe it or Not. Betsy and I don’t believe it because we visited the fountain last time we were here about 8 years ago, and we’ve definitely aged since then! 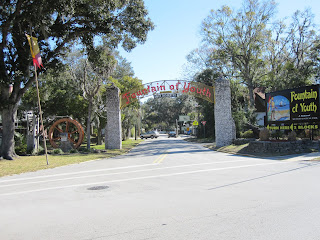 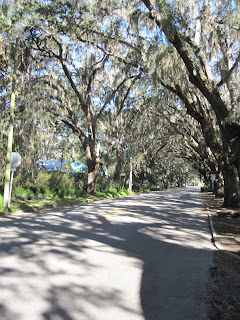 We passed under the canopy of Live Oaks on Magnolia Street. Once, these trees were Magnolias, but were killed off by frost. The city replanted with Live Oaks as they are heartier. 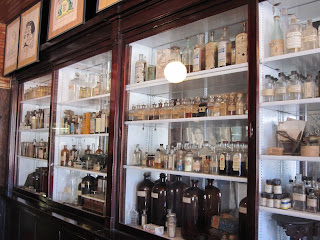 While waiting for the shuttle, we ambled across the way to an Old Drugstore Museum. It was filled with really unique stuff, medically speaking, from the 17-20th century. It was like stepping back in time.
We finally caught the shuttle and went to the St Augustine Light Station, which contains the lighthouse, the caretaker’s home and other necessary buildings. The station was completed in 1884 and was finally automated in 1968. We trudged up the 219 steps to the top and looked around. It was very windy, gusts to 30mph, and cold. We did not stay long, but it was a very clear day and the view was spectacular. The lighthouse has a red cap with black and white stripes on the tower. The light signature is one long every 30 seconds. The lighthouse houses a First Order(the largest) Fresnel Lens, invented in 1822 by a Frenchman, Augustin-jean Fresnel (the “s” is silent so the pronunciation is “FruhNEL”). 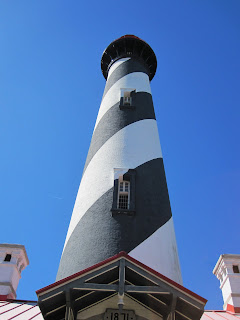 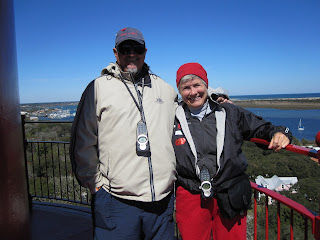 R&B on the top of the lighthouse. 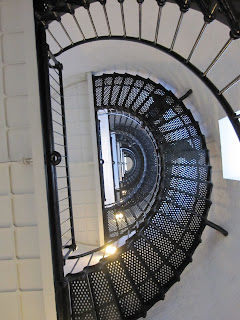 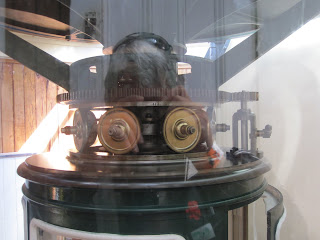 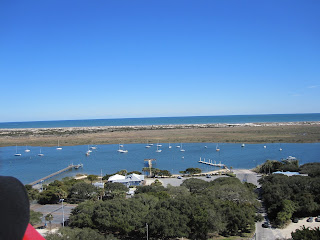 View from the Lighthouse 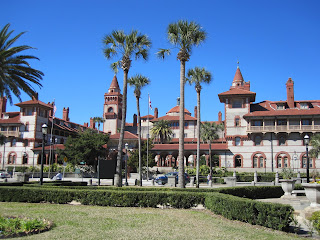 We spent the afternoon revisiting some of our favorite places, like the Old House and Flagler College. Remember, Flagler College was once the Ponce De Leon Hotel and has the largest collection of Tiffany Stained Glass in the world, a priceless collection. Ironically, the collection surrounds the college dining hall.

Just a word about Ponce De Leon. He sailed with Christopher Columbus on his voyage to the new world in 1492. He then came back and landed in Florida in 1513. While he did not discover the Fountain of Youth, he found something more important, if that is possible. He found and documented “The Gulf Stream”. A Ship could leave Cuba, ride the Gulf Stream, and get back to Spain in record time. This was a big help in bringing the New World treasures to Spain and the King. De Leon was the largest member of his ship and he was 4 feet 11 inches tall.
As I said before, we highly recommend St Augustine to all boaters and one day is not enough. Plan to spend at least 4 days and maybe more.