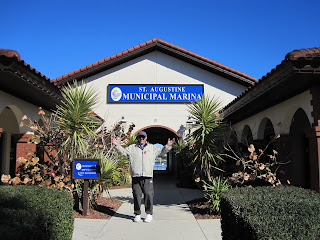 Betsy speaks: We are at the St. Augustine, FL, Municipal Marina, right next to the historic Bridge of Lions. I’m not sure if it’s the weather, the economy, or the fact that there is lots of construction at the bridge, but we are practically the only boat in this very nice marina. The Bridge of Lions, which crosses the Intracoastal Waterway, is nearing the end of a five year, multi-million dollar renovation. Actually, the bridge has been almost completely redone with new material, but will look exactly the same as the old bridge once work is complete. Right now the famous lions are in storage somewhere. The bridge is completely closed to traffic, and a 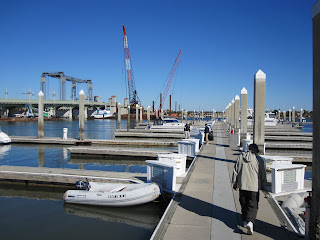 temporary bridge was erected right next to it to handle traffic while the renovation is ongoing. Once the renovation is complete, that temporary bridge will be torn down and the material that was used for it will be put out to sea as a fish haven. As the renovation nears completion, the waterway was scheduled to be closed this week and we originally thought that might affect our travel plans. As it happens, they are a couple of weeks behind schedule so the closure hasn’t happened yet. We found out once we got here that we might not have been affected anyway because the shallow draft and low clearance of our boat would have allowed us to go under the bridge outside the main channel that would be closed. 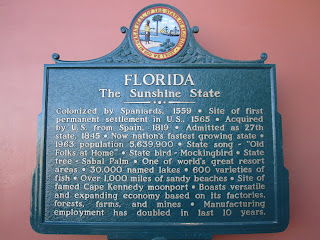 This morning we purchased tickets to do one of the trolley tours around town. These tickets are good for 3 days for us to hop on and off at the many historic locations around town. It is still very cold, mid 50s, and the trolleys are open, so our initial tour was cold! Our plan was to ride all the way around once, then go back to the places we were most interested in seeing up close. We did hop off about half way through when the trolley stopped near a Walgreens. We needed a couple of grocery items, and figured we could get them there since there is not a grocery store near the marina that we’ve found yet. We also ended up getting the H1N1 flu shot! Then we hopped back on the trolley and returned to our starting point right in front of the marina. 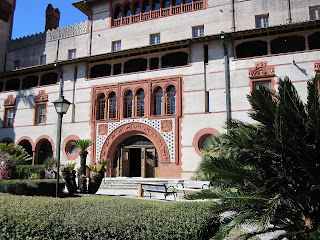 We unloaded the groceries and had a quick bite to eat on the boat. We decided we wanted to take the 2pm tour of Flagler College, which is an easy walk from the marina.
Industrialist Henry Flagler had decided that St. Augustine should become the “Newport of the South” for rich Yankees to come during the winter months. He built three magnificent hotels, the first and grandest of which was the Ponce de Leon Hotel, completed in 1888. It was built in only 18 months, which is unbelievable when you see its grandeur! The dining hall has the largest collection of Tiffany stained glass windows in the 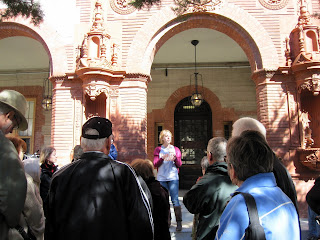 world, worth many millions of dollars. The walls have hand painted murals by George W. Maynard that are absolutely breathtaking. The rotunda is a four story dome with gold accents. This luxury hotel was the first public building in Florida to have electricity, and it was personally designed and installed by Edison. The building launched the careers of architects John Carrere and Thomas Hastings who are noted most for the New York Public Library and the House and Senate Office Buildings adjacent to the Capitol in Washington, D.C. It is the first major poured-in-place concrete building in the US. 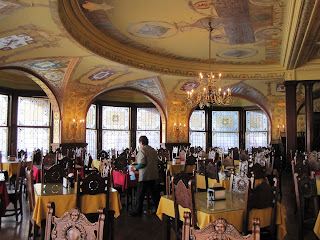 In 1968 one of Flagler’s heirs founded Flagler College, and the girl’s dorm and the dining hall are what is now located in the old hotel. Begun as a four year liberal arts women’s college, it became co-ed by 1971. Over 43 million dollars have been spent on renovations and the addition of new buildings. Daily tours of the historic hotel portion of the college are now offered by students. The building is truly beautiful and we thoroughly enjoyed our tour by junior business major Alyssa. 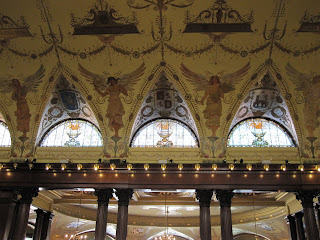 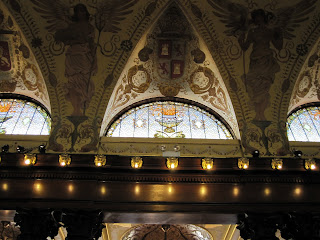 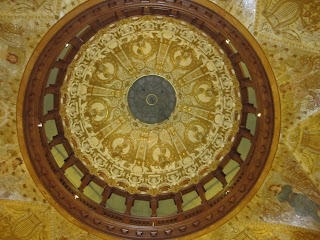 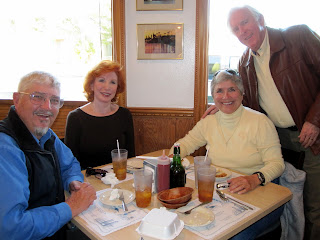 After our tour we returned to the boat to rest up for a much anticipated visit from my cousin Scott Makepeace. Scott and his wife Pat live in Jacksonville, Florida, but come to St. Augustine frequently because their two daughters live here. I hadn’t seen Scott in several years and the only change I noticed was that his once blond hair is now a beautiful white. He took us to dinner at a restaurant on the other side of the waterway called Osteen’s, and what a treat it was. Osteen’s is very small, I’d say less than 20 tables total. We arrived shortly after 4PM and there was already a line to get in…it is very popular and with good reason. 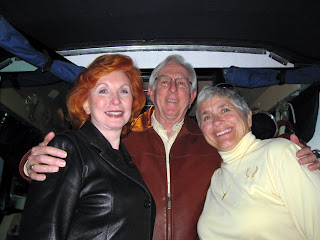 Once we were seated, Scott told the waitress we all wanted shrimp! He had asked ahead of time if we liked seafood and we said yes, but we were surprised that he just ordered for us before we even had a chance to read the menu! Then he did give us a chance to say we would prefer something else and I must say I did hesitate when I heard they had Mahi. But he convinced us we should stick with shrimp, and I’m glad we did. I must say it was the best fried shrimp I’ve ever eaten! I seldom eat fried food, but this was truly superb! This restaurant has been in the same family for many years and they refuse to expand it. They do not take reservations, and they do not take credit cards. Apparently they have SRO crowds every night. When you arrive you give your name, then wait in the parking lot or in your car until your table is ready. They serve no alcohol, but there is a bar a couple of doors down. You can wait at the bar and they will call you there when your table is ready! They have a brisk takeout business as well. The service was excellent.
Tomorrow we will do more of the hop on hop off tour. We hope to be at Flagler Memorial Presbyterian Church for an organ recital at 12:15, which is the first in a series of organ recitals there during lent. I stopped in there today looking to see if they had an Ash Wednesday service and found out about the recitals, so that sounded like a special treat.