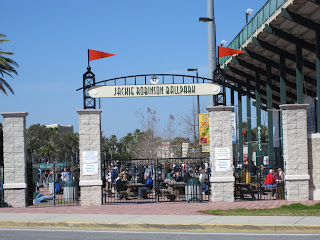 [Betsy] We usually try to go to a nearby church on Sunday morning, but we didn’t get here in time to check out the neighborhood yesterday so were going to forego church this morning. However, I stepped off the boat mid-morning and heard hymn singing in the distance. I was getting ready to take a bike ride to the beach, which would take me by where it sounded like the music was. 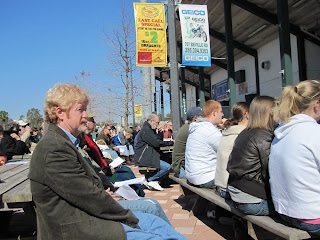 Passing by Jackie Robinson Ballpark across the street from the marina, I saw the congregation seated around the picnic tables in the concourse of the stadium. I quietly slipped in and sat down just in time to hear the sermon from the beginning. Later I talked to the preacher and learned that this was put on by Christ Community Church. They have a large congregation and a large church building near the Daytona Speedway. Every year on race weekend they hold their service here at the ballpark rather than fight the crowds near the speedway. It being Valentine’s Day, the sermon was about love, and I thoroughly enjoyed it. The rest of the 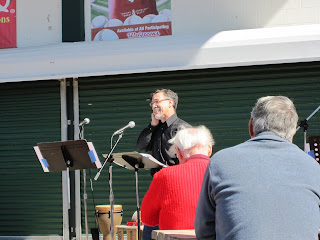 congregation stayed after the service for hotdogs and fellowship at the ballpark, but I opted not to stay for that. 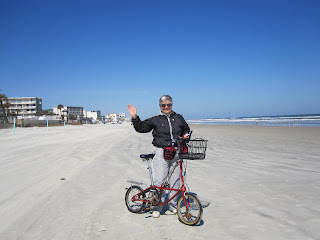 Instead, I hopped back on the bike and rode the mile or so across a bridge over the intracoastal waterway and to the beach. Yes, they are still having record lows here in Florida, but the sun was bright today, and there was little wind. The high was 54 degrees (I think normal temps this time of year are in the 70s). So, bundled up and wearing a hat, I was not too cold. Of course Daytona Beach is famous for allowing any and all vehicles to ride on the beach, which is very hard packed sand. So I took the bike right out onto the beach and rode up and down. It was a beautiful day and a fun experience. Rick had not joined me on this jaunt, so I had fun taking my own picture using the timer on the camera and setting it on top of 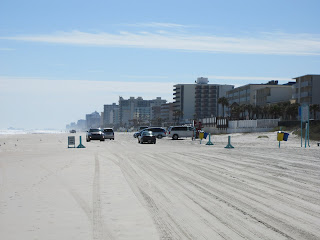 traffic signs on the beach! 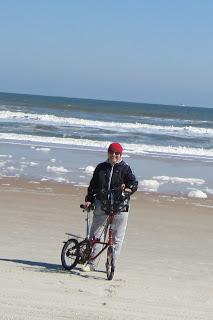 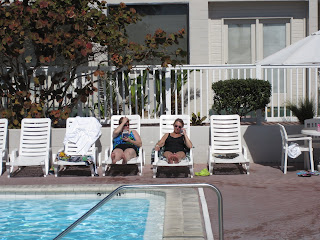 Passing a hotel, I saw that some people weren’t as bundled up as I was. Still, it was 54 degrees!!!

Rick spent the afternoon making minor repairs on the boat and in the marina lounge watching the race. We also walked the docks a little bit trying to enjoy the relative warmth and sunshine. Today is supposed to be the warmest day we have for a while.

There is a very nice and reasonably priced restaurant here at the marina, as well as a full service West Marine store. One thing I really like about the restaurant is the menus that light up when you open them, making them so easy to read!

We may head on up to St. Augustine tomorrow or we may stay over here another day. We’ll decide in the morning. We have decided that we’re fed up with the weather and we just give up on it getting any better. So we’re going to skip the St. John’s River side trip and head straight for home, planning to arrive at Topsail Beach about March 12 or 13, and complete our loop by crossing our wake in Sneads Ferry on Sunday, March 14. 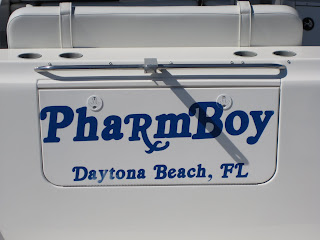 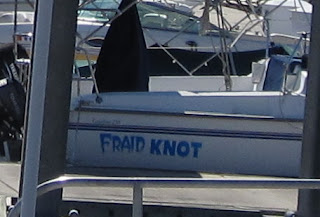 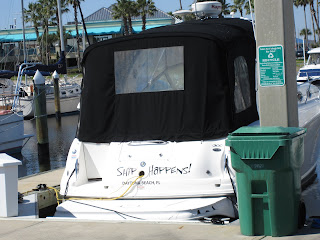