[Rick] We began the day at the Astronaut Hall of Fame. This building and exhibit recalls man's journey into space by way of astronaut personal items, memorabilia, exhibits, and personal stories. The exhibits cover the entire span of American Space Exploration from Mercury to Genesis to Apollo to The Shuttle. The building and entrance is impressive. Just inside the main door is a statue of Rear Admiral Alan B. Shepard, the first American in space and one of the famous Mercury 7 Astronauts. Many of the exhibits are personal. Things like photos, diaries, and personal correspondence of the brave men and women in space. 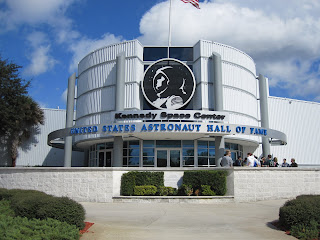 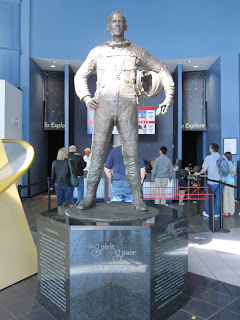 Betsy did her best to help the space program by operating one of the consoles that was used in the Mercury program. This is not a replica, it is one of the original consoles from Houston. Many of the exhibits are the "real deal" 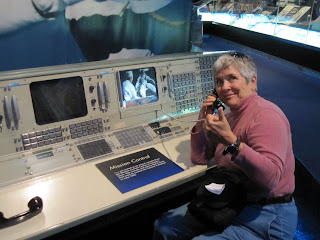 One of the most striking exhibits is this one from the Apollo program. These words are prophetic as the three astronauts Grissom, White, and Chaffee perished in an on board fire as they prepared to launch in Apollo 1 in 1967. 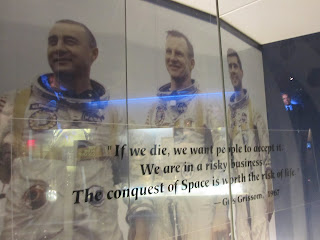 "If we die, we want people to accept it.
We are in a risky business.
The conquest of Space is worth the risk of life."
Gus Grisson, 1967

In the Shuttle section, there are memorials to the fallen heroes of that program. These include my friend, Captain Mike Smith, USN and pilot of STS 51-L, the ill-fated Challenger Mission. Mike and the rest of the crew perished on January 28, 1986. Most people remember this Challenger flight as the "First Teacher in Space" flight as teacher Christa McAuliffe was aboard. They tend to forget that another woman, Judy Resnick, was also aboard. Resnick had already been into space several years earlier serving as mission specialist. 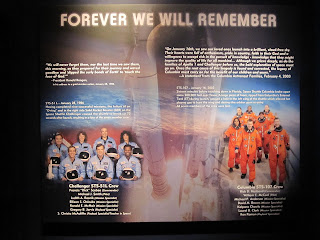 All in all, this huge exhibit is well worth a half day of the visitors' time and we recommend it to everyone, The entrance fee is included as part of the entrance fee at the Kennedy Space Center.

On the way back to the boat, we checked out the spot where we were going to view the shuttle launch. At 1400, some people were already staking a claim to a space for the 0439 launch the next morning. Along the road, in every park or space, people were setting up RVs and claiming their space. We did notice some people in RVs setting up the day before. Seeing all of this "claiming" going on, we decided to get to our spot early. 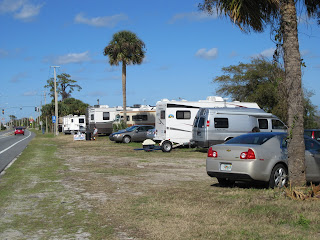 We had dinner with our sister-in-law Tina from Zephrhills. She and her friend, Brian, came over to eat with us and to watch the liftoff. They could only get accommodations in Cocoa, about 20 miles away. We all agreed that the road would be too crowded for them to come back to watch with us, so they are going to watch in Cocoa.

We packed up the rental car and arrived at "our spot" at 2039, 8 hours before the scheduled launch. The place we had chosen was a residential street bordering the water and looking straight over the waterway to the launch pad, about 8 miles away. The pad was well lit and we had a perfect view. At this time, there were about 20 other cars on the street. The sky was clear, the air was nippy with temps at 50 degrees. We set up the tripod, the chairs, reclined the seats back in the car and slept for a while.

By 0100, Sunday morning, the street was full on the water side, no place to park. The clouds began to roll in and by 0200, all of the beautiful stars were gone, replaced by billowing clouds.

By 0300, both sides of the street were filled with parked cars. The street was a parking lot. People began to mill around, quiet, reserved, and chatting among themselves. There was one man there in shorts, a short sleeved shirt, driving a convertible with the top down. Another visitor, a photographer, from Los Angeles, had come to photograph the launch. He had come the last time when it had been delayed and he had to go back home. He also told us that last time this same spot had 2 cars. We suspect that the reason for the large crowd is a combination of:
1. Launch on a weekend,
2. Last nighttime launch,
3. Only 5 more launches to go,
4. Some people were on the way to the Super Bowl and stopped over.

By 0407, NASA issued a statement that they were trying to get a waiver from Houston to "go" in spite of the low clouds.

We packed up our things and made our way back to the boat. Due to the traffic, it took us an hour to get "home," normally a 5 minute drive. By 0600, we were sleeping soundly on the boat, resting up to do it all again tonight! We both slept in until after 1030 this morning.