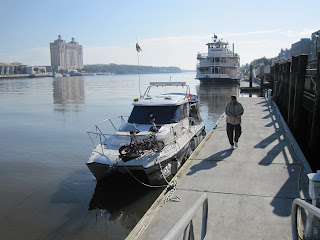 Betsy speaks: Although we are happy to be right in the heart of downtown Savannah, the current of this river is terrific, and we are rocking and rolling on the boat. We actually have 3 extra lines to keep us in place. We've also put out every fender we have! This is a very busy port with huge container ships coming by many times a day, and each time we are rocked some more. Last night we were both awakened several times by the turbulence, and we can hear the water rushing by the boat right next to our heads in the cabin. 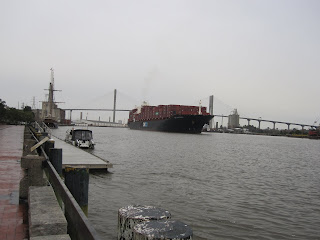 Today we were very lucky weatherwise. The forecast called for rain all day, but the rain did not start until late this afternoon. Temps were in the mid-50s. We started the day by signing up for another hop on and off “trolley” tour.

About 8 years ago we visited Savannah and did a walking tour where we heard about the book “Midnight in the Garden of Good and Evil” by John Berendt. I’d never heard of the book before, and didn’t understand its significance as the tour guide mentioned it over and over. Later, I read the book and absolutely loved it. Knowing we were coming back to Savannah, I re-read it just a 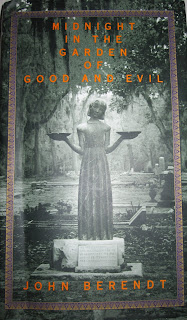 few days ago. It is a true story and involves debutantes, drag queens, murder, homosexuality, and voodoo. It gives a lot of the history of Savannah, especially the preservation of the historic district, as the main character was a very rich socialite preservationist accused of murdering his gay lover, then tried and convicted 3 times before finally being cleared in a fourth trial after many appeals. I was anxious to revisit the historic homes and public squares and the cemetery that are all so important in the book.

So about mid-way through the trolley tour I left Rick on his own and I went off on another tour that concentrated on the book. Jim Williams, the main character, preserved and lived in a house called the Mercer House, now known as the Mercer-Williams House. The songwriter Johnny Mercer, of Moon River fame but also the author of hundreds of other songs, was related to the family that had once lived here, although he himself never lived here. It was in this house that the shooting took place. Although finally being freed after four trials, Jim Williams died not long after that of natural causes. The house is now occupied by his sister and is open for tours, but I did 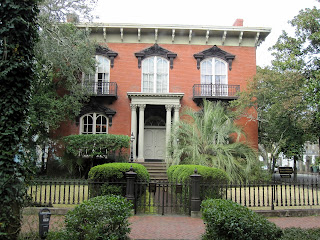 not go in. The rest of “The Book Tour” took me by many of the homes mentioned in the book, as well as the nightclubs, restaurants, etc. that were a part of the story.

Also prominent in the story was a voodoo lady named Minerva, who cast spells on the jurors, etc. Minerva spent lots of time in graveyards. The Bonaventure Cemetery just outside Savannah wasn’t really important in the book, but the photograph on the cover was taken in that cemetery so it was part of our tour. As a person very interested in genealogy, I am a lover of cemeteries, and this is one of the most 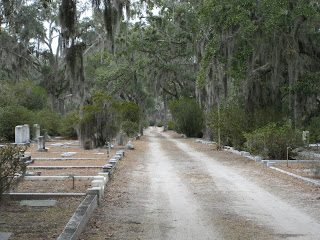 beautiful cemeteries I’ve ever been in. There are many beautiful carved monuments, and the Spanish moss hanging on the live oaks is thick and mysterious. Unfortunately, the monument used on the cover became such a tourist attraction that it had to be removed, and is now in the Telfair Museum in town. 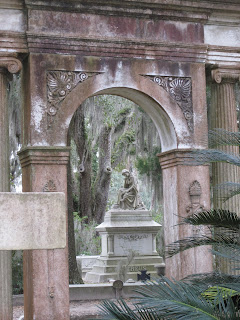 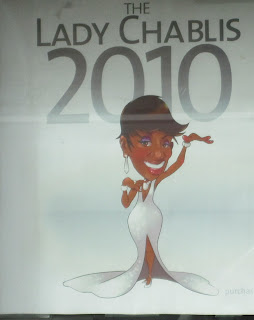 One of the most intriguing characters in the books is “The Lady Chablis,” a transvestite who still performs in Savannah a couple of times a month. I know all of this sounds strange, but it really is a great book, and the tour companies all say their business has greatly increased as a result. I think the overall resurgence of interest in historic preservation in combination with the book’s publication have had a huge impact on tourism in Savannah. Of course, the subsequent movie directed by Clint Eastwood and starring Kevin Spacey helped as well.

Once “the Book” tour was over I stopped in at “The Book” gift shop/museum. I was greeted by the president of “the book” fan club, who is clearly a believer in ghosts! She told me about personally meeting Minerva, the voodoo priestess in the book. She also made it clear to me that her shop is haunted and she herself has seen ghosts in it on several occasions. Her shop has all kinds of book memorabilia including autographed books for sale. Most 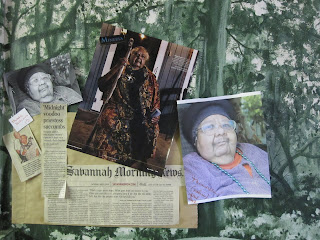 intriguing, though, was the displays of photos and newspaper articles about the people that had been characters in the book, most specifically Minerva, The Lady Chablis, and Jim Williams himself. 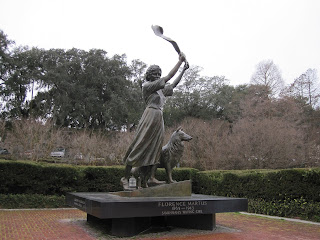 I then picked up the other tour where I had left off. The rain was just beginning as I neared the boat. Rick had finished the original tour and was waiting for me on the boat. I gave him a call, and he told me to be sure to go by the Waving Girl Statue and take a picture. This statue is right on the riverfront near where we are docked, and commemorates Florence Martus, who for 45 years waved at every passing ship. The story is that she found the man she loved, he left on a ship promising to come back, and she was looking for his return. He never returned. 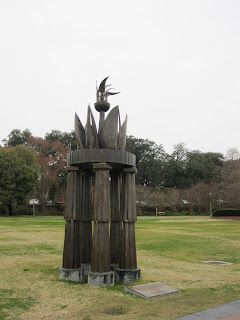 Nearby is also the caldron that held the Olympic Flame in Savannah when the 1996 Olympics were held in Atlanta and the yachting venues were here on the Wilmington River just outside Savannah, and area we passed through yesterday on our way here.

Savannah is a fascinating city with tons of history. We’d love to spend more time here, walking the downtown district, visiting the inviting squares, touring the historic homes. But all of that involves being outdoors, and tomorrow the high is predicted to be in the 40s. So we’ll move on and look forward to coming back here sometime when the weather is warmer.

Another boat just came by, and the Rick ‘n Roll is rollin’ again! No wonder we’re the only pleasure boat docked here on this beautiful waterfront!
Here are some more cemetery scenes, including Johnny Mercer's grave that was seen at the very beginning of the movie "Midnight in the Garden of Good and Evil." 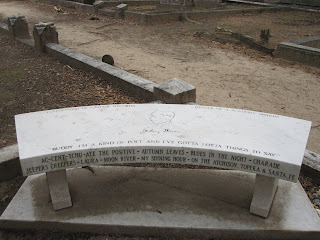 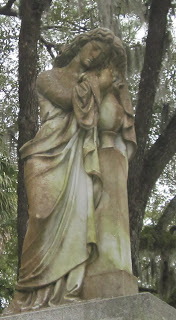