Today was a very relaxing day. After breakfast, we walked to Low Island, the scene of a waterski show and demonstration at 1100 and the local Cardboard Boat races at 1200. All this is part of the Haweater’s Festival here at Little Current. 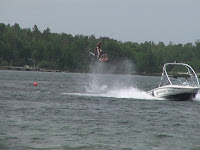 The waterski show was good. They did all the standard tricks, skiing on a paddle, lifting a girl into the air, the pyramid at the end, skiing on a round table, barefoot skiing. Of particular interest was the hydrofoil ski. This device let a person ride about 2 feet out of the water, with a foil in the water for control. The skier did some very tough acrobatics including front flips. (Betsy comments: I used to do several of these tricks, including skiing on a paddle and the round disk, when I was younger, in my heyday as ski queen of Topsail Beach, a title I maintain to this day!) Several people from 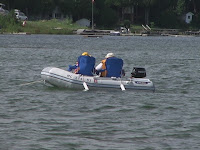 the marina came to watch in their dinghy. One dinghy had 7 people in it, about 5 too many. But, the police boat was close by to pick up anyone that managed to go overboard. 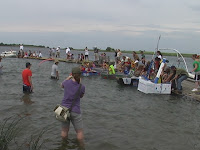 The Cardboard Boat Race was next. The rules are simple. Construct a vessel made of cardboard, duct tape, and you can use a wooden rod for a handle. There were 4 age groups, and the little ones had it better as they did not weigh as much. Also, the wind was blowing very hard against the rowers. So, a square, non-pointy bow was a liability. The contestants had spent weeks making the boats, and they were decorated to the nines. They raced in their age group, and there was a winner in each group. It was hilarious!
Low Island and Park is a particularly nice park. It has tennis courts, a skateboard area for the kids, a pavilion with restrooms, many picnic tables, and other amenities. The town of Little Current and NEMI, Northeastern Manitoulin and Islands, are to be congratulated for providing so much recreation area for the residents.

We joined our friends on Pookie II and Perfect Remedy for dinner at the Anchor Inn again, and came back to our boats in the pouring rain. We cannot stress how awful the weather has been here in Canada! Once again, we are very thankful to have the “den” enclosure on our boat when it rains!

Pookie II and Perfect Remedy are planning to leave in the morning, so we bid them good bye. We plan to stay here one more day to enjoy the Haweater festivities.
Here are more pictures of the cardboard boat races... 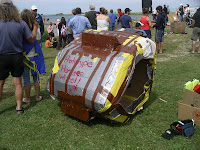 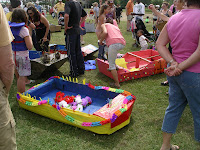 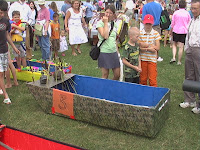 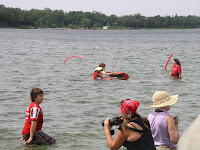 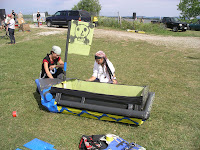 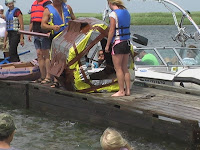