[Rick] We left Petoskey, MI at 1030 for the short 20 mile run to Charlevoix, MI. Charlevoix is one of the busiest marinas in the Michigan system. The town is considered a must-see for loopers, since it has a huge boating community. Also, the marinas are very well protected by a breakwater and a long canal leading to Lake Charlevoix.

The ride, though short, was slow since we had the 2 ft waves on our starboard beam. This makes for some back and forth, and is not really comfortable. 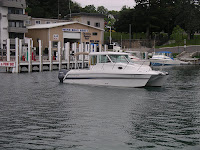 Once we arrived in Charlevoix, we had to wait for about two hours for a slip. The marina is busy, but they don’t take phone reservations, and there was a flotilla of sailboats coming in today. They had to wait to see who was leaving before assigning a slip. While waiting, a gentleman came over and indicated he had a Glacier Bay 2690, 2005 much like ours. We went over and found that even though the two boats were made in the same year, there are some differences. He had a very pretty and clean boat, not at all like ours at this time. 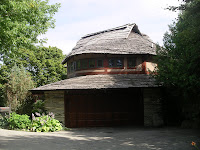 Betsy rode her bicycle down the bike path to the mushroom houses. Earl Young began the design and construction of these unique homes in the 1930s. He built over two dozen of them. Today, they are in a very exclusive neighborhood on the water. 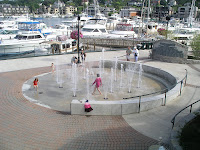 One of the public spots at the marina includes a dancing fountain. Kids are encouraged to play in the fountain during the day. At night, the fountain puts on a waltzing waters show from 2100-2300. Once again, this city has many parks, many flowers and very green grass. We have agreed that the flowers and grass is due to the fact that it does not get so hot and parch the greenery. 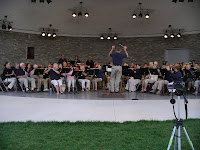 This evening, we attended the weekly concert by the Charlevoix Community Band. They played a variety of music, including show tunes, marches, classical pieces, and the crowd favorite, the theme from “The Lone Ranger”, The William Tell Overture. There was quite a crowd on hand and all seemed to have a good time.
Tomorrow, off to Leland or Frankfort, depending on the weather. Right now, it looks great, but you can never tell. 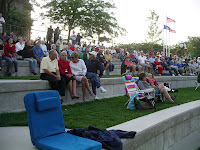 (Betsy adds): I played flute and piccolo in the high school band and have always loved band music, so I really, really enjoyed the band concert! Brought back great memories.