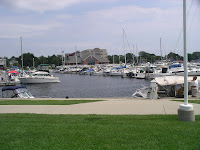 Betsy speaks: OK, OK, Rick says we’ve gone several days without updating the blog. Well, we’ve been in the same place for 3 nights, Ludington, Michigan. We decided it was time for a break from daily moving, and also, the weather has turned lousy again. Not lousy really, just windy, and waves today were reported by the fishermen that came back early as being three feet and building. Forecast calls for four feet before the day is out.

However, what a great place this is to be “stuck”. This is the nicest marina we’ve ever been in! Yet the rates are very reasonable…less than $1.20/foot including all amenities. There is a pool, hot tub, exercize room, library, lounge with plenty of sofas, two fireplaces, TV, beautiful landscaping, nice floating docks with matching dock boxes at each slip. 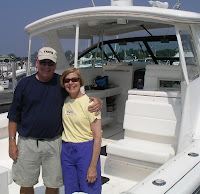 One of the most memorable aspects of doing the loop is the people you meet. Docked next to us here in Ludington is a wonderful man named Sid. Sid really lives in Kansas City, but spends his summers here in Ludington, along with his lovely wife Carol, at a cabin/cottage nearby that his parents had purchased many, many years ago (sound familiar?). He keeps his beautiful Tiara Yacht here at the marina, and comes here nearly every day to just polish the boat and sit and enjoy the marina and the friendly people here. Sid is an active member of the US Power Squadrons, involved in several of the same things Rick is: teaching, boat inspections, etc. I haven’t been to a Wal-Mart since leaving home nearly 3 months ago, so needless to say we took Sid up on his offer to lend us his truck for a trip to Wal-Mart. One new computer*, new digital camera and a load of groceries returned to the boat with us…Thank You Sid!!! You will be remembered! 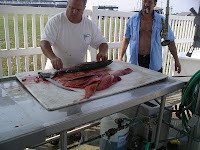 There are lots of fishing boats here, all with scads of fishing poles sticking up. The Cabo next to us has no less than 20 rod holders, most with rods in them. And boy do they catch fish! Every time they go out they come back with coolers full of King Salmon or Steelhead Trout. HUGE fish! TONS of fish! Unbelievable!!

The marina has a state of the art fish cleaning station, complete with macerator for the bones, innards and skin. It is in use most of the day, and these folks walk away with enough fish for a year after only a couple of days of fishing. 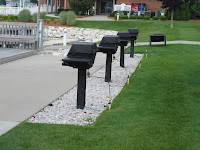 For those that want to eat the fresh catch while it is fresh, the marina provides gas grills already hooked up and ready to use. 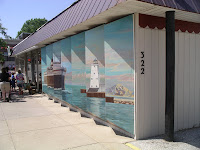 Like all the other towns along the Lake Michigan coastline, there are beautiful flowers everywhere and lots of parks nearby.
The Ludington park has several beautiful bronze statues. Ludington is also famous for the murals on several buildings, 12 in all. Most murals have a “hidden object” for the viewer to find. The one pictured here is a three dimensional mural that seems to move as you walk by. 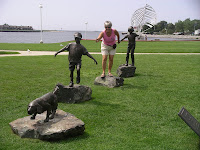 Another Ludington highlight is the ferry boat that carries cars and pedestrians across Lake Michigan to the Wisconsin side. The trip takes four hours, and the cost is $77 per vehicle PLUS $74 per person one way…not a cheap way to travel, but I guess it beats driving all the way around the lake. Ludington is about halfway down the lake. The history of the ferries is interesting. It started in 1897 as the world’s first steel hulled railroad car ferry. By the 1940s this was the world’s busiest car ferry port, with several of the huge boats operating 365 days a year. 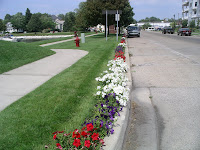 By 1980 the ferries were not being used enough to stay in business, so the ferries were sold to a couple of Ludington businessmen who tried to keep them going. However, their venture failed and the ferries seemed destined for the scrap yard. In 1992, another Ludington entrepreneur purchased the three remaining ferries, invested his own money to refurbish and improve the boats and began a new car ferry service across the lake. Proving that the ferry service still had a bright future for cars, commercial trucks, and leisure passengers, he sold the business in 1994 to three more Ludington businessmen, and today it is a very successful endeavor, running two round trips a day.

We enjoy seeing the different names on boats, especially when they are different or unique. Rest assured if your boat name has the word “sea” in it, it is not unique…we’ve seen numerous boats with names like Sea-la-vie, X-ta-Sea, Seas the Day, Sea-esta, Fanta-sea, etc. We could write a book about trite boat names. But we do see some that we get a chuckle out of. Here’s one we hadn’t seen before. 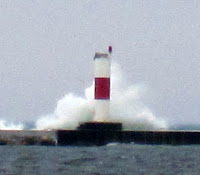 Looking at the weather report yesterday, we thought we would be here until Tuesday, and we weren’t complaining because this is such a nice place. But we do have reservations in Chicago starting next Thursday so we do need to get underway ASAP. We had extremely high winds here this afternoon, with waves breaking over the breakwater and splashing up high on the light houses. But late afternoon forecasts seem to indicate maybe the high winds this afternoon have helped push out the weather that was forecast, and now it looks like we may make it out of here tomorrow (Monday). Every looper we know has been marina-locked since last Thursday or Friday. So wish us luck!

*Now for a word about the new computer we purchased at Wal-Mart. We had not forked out the big bucks for GPS chips to cover Canada, but relied on paper charts and an inexpensive computer program for which we had the Canadian Hydrographic Service charts, similar to NOAA Charts. It worked perfectly, and we were able to have my little 8.9” computer on the dashboard along with a USB GPS receiver so we knew where we were and where we were going at all times. Our last hour in Canadian waters was our roughest part of the trip, fighting 3 to 4 foot waves coming from all directions, like a mixing bowl. About 5 minutes before we crossed into the USA, where our GPS units with US charts would have kicked back in, we took a big wave and a big bounce, and the 8.9” “cutie pie computer” bounced off the dashboard and onto the deck, ruining the LCD screen.

Fortunately these “netbooks” are very inexpensive…even with purchasing a new one we come out way cheaper than we would have if we had purchased Garmin or Lowrance chips for the Canadian waters. Also fortunately I brought all of my navigation software with me just in case something like this happened. We really don’t need the computer for charting anymore, but it is nice for each of us to have our own computer on rainy days!