[Rick] The morning was particularly awful as it poured rain all morning. We finally got out after lunch and walked around. St Ignace is a really pretty city, has plenty of the stuff you want to see and not too much touristy stuff. I guess most of that is left for Mackinac Island. 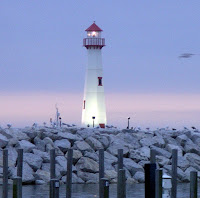 There is a very pretty lighthouse at the entrance to the marina. It anchors a massive breakwater that was built to protect the marina occupants from the wake of the many ferry boats that go by each day. The ferry boats go at full speed as their living is at stake. So, it does no good to complain about the wake.


You will recall that last week, we started out from Gore Bay and returned when the weather was just too rough. The 47 ft, 49,000 lb vessel Theresa told us that 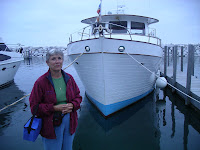 they took waves over their bow for only the third time in 14 years. Here is Betsy standing in front of Theresa. You can see that we would have had a bad day if we had stayed out that day.

At 2200 each Saturday, the town of St Ignace has a fireworks show over the channel. We have seen many shows and were not expecting much as it is quite an expense to do this each week. We were pleasantly surprised. Although the fireworks started out kind of wimpy, the finale was as spectacular as we have ever seen, in any show. Unfortunately, we did not have a good camera, so we do not have pictures of the fireworks. Just close your eyes and imagine the best fireworks finale you have ever seen.