[Rick] Today marks exactly 3 months since we left Sneads Ferry. In that time, we have traveled 2195 miles, passed through 74 locks, and purchased $5097.54 in gasoline. It has been a great ride…… 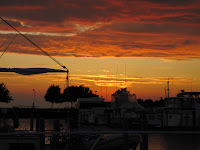 Today, after 5 days in Lovely Ludington, and a lovely sunset, we felt that we just had to get some miles behind us. The weather, mostly wind related, has been terrible for the past week. Today, the waves were to be 1-2 feet, so we left at 0745 for Muskegon, 60 miles away. We made the trip in 4 hours. The last hour, the waves built up and we were in 2-3 footers for a while, but they were at a favorable angle for the most part.
Along the way, we had to bypass the town of Pentwater, MI. This small town had been recommended to us by Margaret Croft, but we just could not stop. We had to push on. 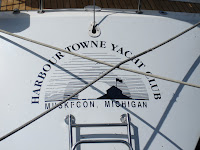 We did something today we have never done. We tied up at a marina, won’t mention the name, and before we checked in, we decided to move on. The dock was wobbly and there was a lot of rolling wake. We called another marina, got a slip, left the first place, and moved on. The new place, Harbor Towne Marina, is quite nice, steady docks, no wake, restaurant nearby, cable TV, etc. I think we made the right decision. We are in a permanent slip, and this one is named, Paradise Ain’t Cheap. 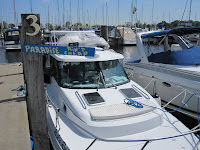 Tomorrow, the waves are supposed to be less than one foot, according to NOAA. If this is the case, we will take off across the lake to the Windy City, Chicago. The distance to Chicago is 100 miles. Tune in tomorrow to see what happens.