[Rick] After gassing up the boat with 577 liters of gas, $640.00 (Canadian), we left the Town of Little Current for the Town of Kagawong and eventually the town of Gore Bay, where we will spend the night. For those technical types reading, there are 3.78 liters to the gallon, so 577 liters is really 152.3 gallons. However, a liter of gas is over $1.11 thus making a gallon of gas $4.16 per gallon (Canadian). We will have a lesson on converting Canadian dollars to American dollars at a later date. Suffice it to say, gas is expensive here. This is odd, since Manitoba Province has one of the largest crude oil fields in the world. However, they have no refinery here, so they ship the oil to the US, for refining, and then import it back into Canada for consumption. 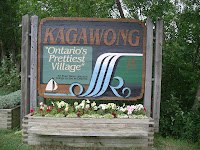 Kagawong is only 16 miles from Little Current. We almost did not go there as the weather was not cooperating. It was raining, again. But, as we approached the decision point, it looked clear toward Kagawong, so we turned off the main channel and into Mudge Bay for Kagawong. We are glad we did. This little town has two main attractions, Bridal Veil Falls, and the Anglican Church. 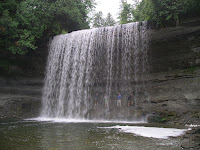 Bridal Veil Falls is about a half mile from downtown, and is accessible from the highway or through several wooded trails. We took the blue trail. This trail is bordered by a babbling stream, from the falls, and is very peaceful and green. The hike to the falls takes about 15 minutes. Once there, one can walk in the pool beneath the falls, walk behind the falls, or go up top to the observation section to take great pictures of the falls. The Falls were indeed beautiful. Betsy waded into the pool and in an act much like her mother, picked up some small rocks to take back home as a remembrance. 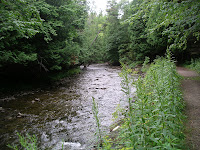 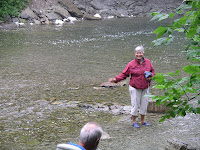 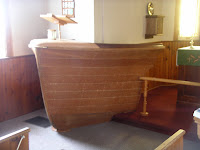 The Anglican Church, St John the Evangelist, is located right at the marina. It is a small church, barely holding 50 people, and is pastured by the Rev. Beth Topps. Back in 1970, 4 people lost their lives in a tragic accident at sea. A couple of years later, two locals brought the bow of the wrecked ship to shore, where it was later incorporated into the church. The bow of the boat is the pulpit. The church, all very nautical, has an anchor, a bell, and the decoration on the pews is the weight from a fishing net. The church also has a beautiful stained glass window. Check out the pictures. 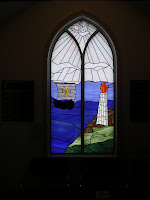 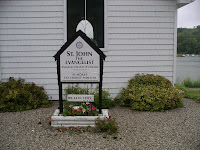 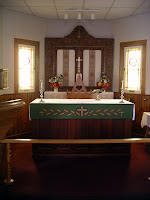 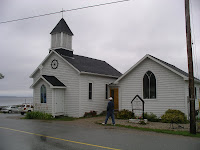 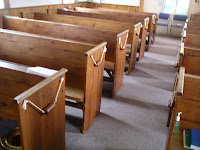 We ate lunch at the one restaurant in Kagawong, and as we ate it started pouring rain. We could see the marina and the bay out the window, and visibility was down to about zero. We were afraid we may end up staying here overnight, which would really be depressing, not that its not a beautiful town, but just that we are tired of the lousy weather. However, the rain stopped and visibility improved just as we finished eating, so we headed for Gore Bay as planned.

The 17 miles to Gore Bay was rough but manageable. One time we were taking the waves directly on our beam which was very uncomfortable, and the rest of the time we were heading straight into them, which was a little better but still uncomfortable. We arrived in Gore Bay late afternoon to find our friends Pookie II and Perfect Remedy waiting out the weather. They had left Little Current a day ahead of us trying to get back to the US before their 45 day allowed time in Canada was up, but they aren’t going to make it. At least 2 more loopers are stuck here as well. Weather reports for tomorrow are abysmal!

Regarding the 45 day rule for being in Canada, if you are here for more than 45 days you are supposed to bring your boat up to Canada’s safety standards, which include having an axe on board, having more flares than the US requires, and a couple of other things. If you’re not stopped and checked, no problem, but if you do get stopped by the Coasties and don’t meet their requirements, you could be in trouble! We were later entering Canada than the other boats here, so it is not a concern for us.