Betsy speaks: I have to back up a day and mention something that happened yesterday that we tried our best to forget about. Those of you who have been reading the blog since day one know that shortly after we left home there was a problem with our Florida heat pump at home that caused water to leak all over the ground level of our townhouse. The carpet in our home office was completely saturated. Our wonderful neighbors Tom and Billie Hayden, who are looking after things for us while we are gone, saw to it that the water was extracted from the carpet, the carpet was deodorized and dried with fans and dehumidifiers. The heat pump, barely a year old, was completely replumbed. There seemed to be no lasting aftereffects, and all was well.

Early yesterday morning Tom called to tell us one of the plumbing joints had come undone and this time it was not a small, slow leak like before, but a real flood of probably hundreds (or thousands?) of gallons of water. The carpet was completely saturated again!!! So we had to go through the same process again. Fortunately, all the books on two large bookcases that had to be moved the first time had not been put back, so maybe it was a little easier this time (look on the bright side). Rick has told the heating and air people, who did the plumbing as well, that he expects them to pay for the carpet and for the labor to move the furniture this time, as well as for fixing the problem.

When Rick first spoke to Tom about checking on things while we were gone, it was really meant to be just bringing in the mail. Who ever dreamed so much could go wrong!!! We couldn’t continue on this trip without a little help from our friends. Thanks Tom and Billie! We love you! 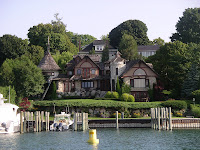 Now back to the trip. We left Charlevoix this morning and headed back into Lake Michigan. On the way out of Charlevoix we passed by the mushroom houses that Rick mentioned in his blog yesterday. Yesterday there was a picture of one of those houses from the street side. Here is that same house from the water…very exclusive! 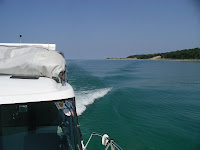 The sun was shining and Lake Michigan was glassy smooth. Our intended destination was Leland, just over 30 miles south. Three of the other four boats we’ve been sort of hanging with had left several hours before us (they are slow, we’re fast). As we approached the turn into Leland, we decided it was such a gorgeous day we would continue on to Frankfort, another 42 miles farther along. I had charted both courses so the decision was easy. We radioed one of the other boats that was within earshot and told them to pass the word that we were continuing on and would see them in a few days. Rick was at the helm, but Beamy the autopilot did most of the driving today. 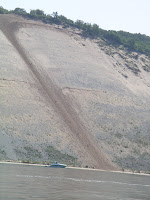 Last night I received an e-mail from a friend in South Carolina asking if we would be seeing the Sleeping Bear dunes. I didn’t know what he was talking about, so I looked them up in one of the cruising guides. I had heard of the high sand dunes we would encounter on Lake Michigan’s shore, and these are in the Sleeping Bear State Park. Sure enough, we passed them today. Thanks to Jerry’s head’s up we hugged the coastline so we could see them up close, and they are spectacular. Here’s a picture showing people climbing up and down them…they are so high the people look like ants from where we were. Rick said maybe the Topsail Beach Shoreline Protection committee should take a lesson on how these sand dunes are made! 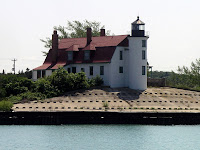 Just past the magnificent sand dunes we came to Point Betsie Light, described as being the most photographed lighthouse on Lake Michigan. Too bad they didn’t spell “Betsy” right! I was riding on the bow as we passed, and again was amazed by how incredibly clear the water is here. In 20 feet of water I could clearly see the bottom. It’s sort of scary, because at home if you can see the bottom you are probably getting ready to hit it!
We love the protected harbors of Lake Michigan. They are well marked and so easy to navigate. Being used to treacherous inlets in North Carolina, I couldn’t picture how Lake Michigan would have such easy access to harbors. It is so nice to be in a huge body of water, and then simply come through a jettied passage into a protected, safe harbor. 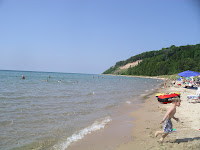 Once we arrived in Frankfort I walked just a couple of blocks back to the “seashore” we had passed on the way in. Looking out over the white sand, it was really just like standing at the ocean. Many people were swimming and sunning on the beach. I stepped into the water about calf deep and it was very comfortable. I can see why people would want to summer here. It is really beautiful, and there are no sharks or crabs! And you don’t have sticky salt water on you when you come in from a swim! Later this afternoon our friends on Pookie II arrived here in Frankfort. They had pulled into Leland and docked, then reconsidered and decided to come farther just like us on this beautiful day. They are in a slightly smaller, much slower boat, so they need to make as much progress as possible on beautiful days like this. 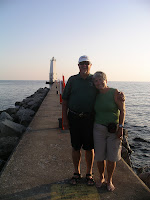 After dinner with Pookie, Rick and I walked back to the beach, walked out on the “pier” to the Frankfort jetty light, then sat on a bench on the beach and watched a beautiful sunset over the water. It has been quite some time since they’ve had a nice sunset apparently, because once the big red ball slipped beyond the horizon people started clapping!

Tomorrow we plan to head out again, probably to Ludington. We had thought we might stay here for two nights, but weather reports are starting to get a little bleak so we want to make progress when we can.