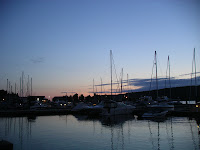 [Rick] Today was a big day, a long day, and a tough day. It started innocently enough at 0600 when we departed the Gore Bay Marina. The sun was just coming up and there was no wind. It was picture perfect. The wind reports for 0500 were for 7 knot winds and 4 knot for 0800. So, we figured the waves would be laid down and make for an easy run to Drummond Island. As soon as we got out there, we realized this was not the case. But, after a few minutes of 2-3 ft waves, straight on the bow, it did start to lay down and for a while, we were on auto pilot at 20 mph. We 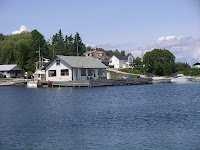 decided to bypass Meldrum Bay, our escape strategy in case of bad weather. However, less than a mile later, we could tell it was getting worse again. So, we turned left and went to the Meldrum Bay Marina. This is a very small place with one Inn/restaurant, a general store, and the marina. We arrived at 0930. 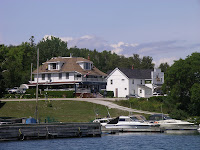 For lunch, we went to the local “hotspot” for lunch and free wi-fi. This would be the restaurant in the Inn. The food was very good, the service exceptional, and the wi-fi was a dish, so it was kind of slow, but it did work.

Around 1500, three sailboats came in and said that it had laid down to less than one foot. We are sure that we can handle this, so the kind marina lady refunded our money, and we lit out Drummond Island. 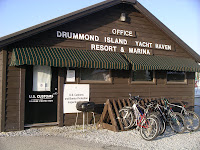 Drummond Island is the closest and most logical place to clear customs for returning to the US. A marina there has a customs officer, and there is usually very little wait.
The first hour of the 43 mile trip was very nice. Waves were 1 ft or less and we let Beamy (the autopilot) drive the boat at 20 mph. Then within a span of 15 minutes, the waves were 2-3 feet, coming from all directions. The last hour was miserable. Along the way, we saw and photographed the USA behind a small sailboat. We finally turned into a bay on Drummond Island and headed for 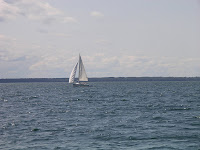 Drummond Yacht Haven. This is a full service marina. In fact, the US Customs maintains an office on the lot and a Homeland Security Officer comes to your boat and executes your entry process. For us, he sat on the gunwale, completed the paperwork, asked a couple of questions about vegetables and fruits from Canada, gave us an inspection number and bid us good-day. However, it was too late as we were already beaten up and tired from starting at 0600 and battling the waves for several hours. 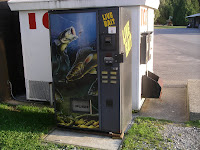 In the spirit of a full service marina, they have something I have never seen. A live bait vending machine.

Several of our friends from the loop are here, including Riff Raff, Pookie II, Morningside, Spey and Theresa.
Betsy adds: GOD BLESS THE USA (even though the weather is still cold and miserable).