Betsy speaks: No blog yesterday, as there wasn't much to say! I rode my bike nearly 4 miles to the Best Buy store looking for a new camera. After much research and consideration, I ended up purchasing the identical camera to the one that was lost a week or so ago. Best Buy is my favorite store, and since this was the first time I'd been in one in many, many months I had a great time just wandering around. I'm sure the people at the camera counter thought I was going to shop lift a camera because I spent so much time there!


Directly across the street was a huge shopping mall with 5 huge anchor stores. Needless to say I spent several hours there as well. I figured since I had pedaled four miles I was going to do some shopping. Of course, I can't buy much because I'm on a bike! AND we have only limited space on the boat. So shopping means mostly just looking. I did buy four Auntie Anne's pretzels to take back to the boat for our next meal.

The bike ride was very enjoyable since there were sidewalks the entire way. Neither of us like riding our bikes in the street, especially one that has a lot of traffic. I've really learned to appreciate the value of bike paths and sidewalks.

Today, Saturday, we were treated to a visit from my cousin Ben Newlin who lives in Orlando. We plan to spend more time with Ben and his wife Rose while we are in Titusville, when we plan to rent a car and drive to Orlando. But Ben, being a retired Coast Guardsman, wanted to see the boat that we've survived on for the past eight months so he drove an hour and a half today to spend some time with us on board. It had been years since I'd seen him so it was great to get caught up. 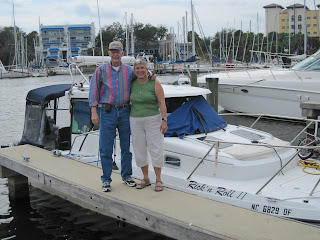 After retiring from the Coast Guard, Ben spent ten years working with the Disney Corporation. He and four others were responsible for starting Disney's cruise line from the ground floor. Ben travelled to Italy several times, where the Disney ships were built, and brought them back to the US. It was interesting to hear him talk of getting a cruise ship up and running from day one, and dealing with all aspects of the operation from food prep to entertainment to crew.

We took advantage of Ben's visit and got him to take us to the grocery store for some provisioning. Rick was out of Pepsis, and they are hard to carry on the bikes! So we stocked up while we had Ben here with his car. 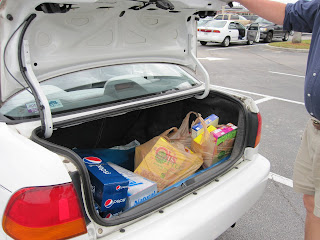 Right now the plan is for us to drive to Orlando after the shuttle launch next week and spend a couple of days with Ben and Rose and probably take him up on his offer to go to one of the theme parks for free. We've never been to Animal Kingdom, so that's probably where we'll go.

Right now we're planning to spend at least two more nights here in Melbourne before heading to Titusville. Looks like there will be a lot of rain next week, but that shouldn't hold us up. We're just glad we're not in the snow storms that are hitting the east coast not too far north of us! The weather here this week has been delightfully sunny and warm.