Betsy speaks: First I want to make a couple of comments about our experience with the sea turtle yesterday. I was astonished at how hard it was to find the right agency to come and get the turtle! One number we called had a recording saying that if you see an injured turtle you must not try to catch it or put it in your boat, even if it is dead. Then we called a couple of other places, and two places we called asked if we could possibly get the turtle into our boat ourselves. I asked them what they suggested we do if we were able to get the turtle in our boat, and they had no good answer! I never thought it would be appropriate for us to try to get the turtle onto our boat. It took nearly an hour of phone calls before we even found someone who was willing to arrange for a boat to come to the rescue. I kept saying to Rick that I was sure if we were in North Carolina we wouldn’t be having this problem! I hope I was right. I was so tempted to call Jean Beasley at “our” sea turtle hospital to see if she had any suggestions or contacts in Florida, but that just seemed too far fetched! 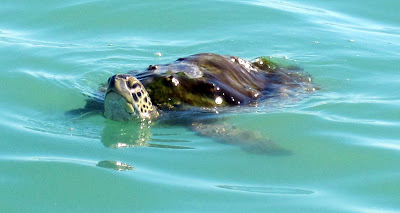 Then when the Florida Fish and Wildlife boat finally did come to the rescue I was even more disturbed/irate. They seemed totally unprepared to save this helpless creature. They had on board a rather small net, which I described as one step above a minnow net. The handle was barely long enough for the net to reach the water. They did not appear to have any type of rope or large net to capture the turtle. After making a couple of feeble attempts to get the turtle with the net, one of the officers started trying to grab him by hand, but kept jerking his hand back like he was afraid of being bitten. There was no swim platform on the boat, so the only way they could get the turtle was to somehow grab him from the rather high freeboard and pull him over the side of the boat. As we watched them making very little progress, going round and round him to the point I was afraid they were going to run over him, I said to Rick “Let’s just leave now and not watch any more.” I was afraid that in another minute they would just give up and leave, and after guarding this thing for over two hours I couldn’t have stood that. So I wanted to just leave and not know what the outcome was and hope for the best rather than know the worst. As we turned and started heading away, they got the net out again, and with what I think may have been their last ditch effort they did manage to get the turtle into the net and onto the boat. Fortunately this was a relatively small turtle. If it had been any larger they would never have managed to get it on the boat they brought. How different this was from the manatee rescue we had seen a couple of weeks ago where they had a boat that was specially adapted for wildlife rescue from the water.

We went over and asked them where they were going to take him, and they said they were talking to a marine biologist on the phone and he would tell them where to go with it. So all we could do was thank them for their efforts and hope the turtle was taken somewhere that could help it. When we first saw the turtle he was not very active…in fact we thought it might be dead. But then we did see some movement, and after a while as the day warmed up the turtle became much more active. I really think that with the right treatment it can be saved. There was a propeller injury on its back that appeared to be an old injury. So I’m hoping the turtle was just cold stunned and will be fine once it get some food and some warmth.
One other thing that was interesting about the sea turtle experience was that as we were waiting for help to arrive we were several times surrounded by dolphins. I’ve heard of dolphins surrounding injured wildlife before, and I guess that’s what was happening here. There were several large groups of dolphins nearby…I can’t say they ever really came right up to the turtle, but they did seem to hover around like they were interested in what was going on.

Today I got to see yet another endangered species…one I’ve never heard of before. Not far from Ron and Marji’s house there are some Burrowing Owls. These owls are nesting in a vacant lot, in a little area of brush right near the side of the road. The unfortunate thing is that this is a waterfront lot, probably valued at $500,000 or more, yet the owner can’t build on the lot or disturb it in any way as long as these owls are here! 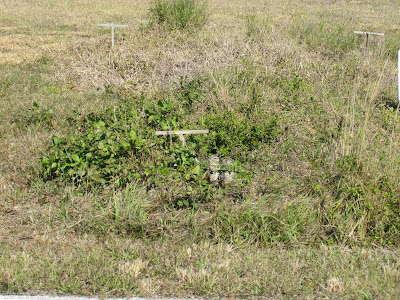 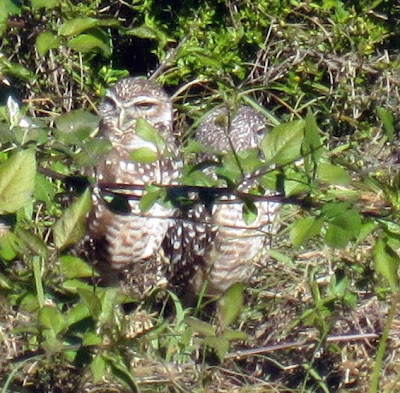 Punta Gorda is a community where probably 90% of the homes are waterfront, thanks to the maze of canals that were dug back in the 1950s. The canals have a concrete sea wall which is the responsibility of the town of Punta Gorda. Each property owner can build a lift or dock next to the sea wall, but the wall itself belongs to the town. A visitor to the area (us) can get totally lost in the canals! The homes along the canals are beautiful. Most are one story, nearly all have a swimming pool surrounded by a large screened “cage” attached to the house. In Ron and Marji’s house, the whole wall of their living room is glass that retracts into the wall, like a pocket door, so that the pool area almost becomes part of the living room. It is a beautiful concept and creates a beautiful, open, airy home.

We are thoroughly enjoying our stay here, sharing boat hunting tales with Pia and Jack who are also in the market for a bigger boat. All three couples have agreed we want to do the loop again, probably in 2012. Pia and Jack spent quite some time this afternoon on a neighbor’s boat that they are considering purchasing. Pia is an interior designer and is interested in buying a “fixer upper” boat and completely redoing the inside. She is also helping Marji with some interior design ideas for her house, which I think is already a showplace! 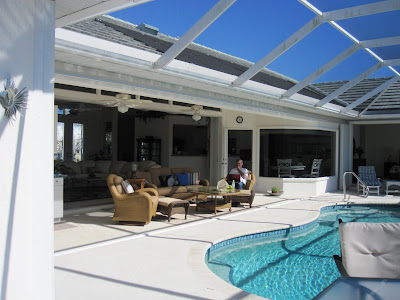 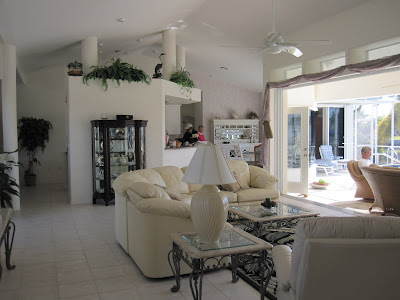 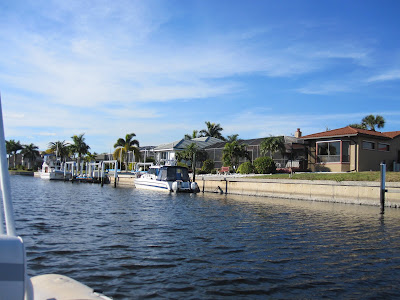 We plan to leave here tomorrow and head on south. The weather today was finally beautifully sunny and WARM! And it is supposed to continue to warm up as the week wears on. Hopefully by Friday I’ll be working on a winter tan!

One more thing from yesterday’s blog. Rick failed to mention the size of the hermit crab…he just said it was the largest one we’d ever seen. My estimation is that the conch shell this crab was in was a foot long! That’s a BIG hermit crab! 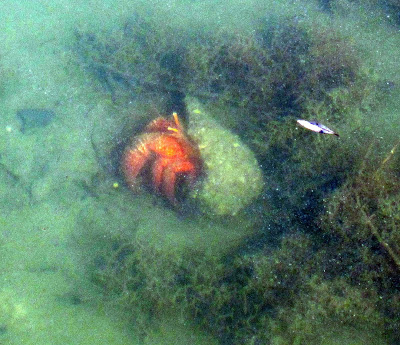