[Rick] On January 1, 2010, the beginning of the new decade, our weather luck continued to be bad. We awoke to a hard rain which tapered off but continued most of the day. The afternoon was cold and windy, so we sat on the boat most of the day. Luckily, we have cable TV, so at least I could watch some of the bowl games. Betsy continues her voracious reading. I began reading the new Dan Brown book The Lost Symbol.

On January 2, 2010 the weather seemed better. It was cold, and the wind made it seem colder. But it was not raining. We decided to go to the Clearwater Aquarium and to the local Publix supermarket. Just before leaving, our niece from Zephyrhills, Trina, came by and in the course of conversation told us that she had checked on the shuttle launch date and it was not February 13, as we thought, but February 7. A quick search indicated she was correct. The good news is that the launch is now a nighttime launch, specifically 4:36 in the morning. The bad news is that we now have one less week to get there, but that should not be a problem. We have been pointing to the launch for the entire trip and it is one of the few things we scheduled. As we walked to the Jolley Trolley stop, we passed some pelicans waiting for the fishermen to clean their catch and discard the remains. There are thousands of pelicans in this marina. 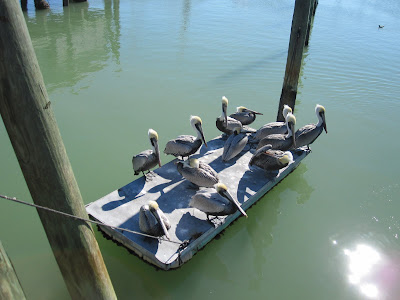 We did go to the aquarium, which was very small compared to the three others we’ve been to on this trip. But here the emphasis here is Rescue, Rehab, and Return of the animals. They have sea turtles and take care of them much like the Karen Beasley Sea Turtle Hospital in Topsail Beach. They have several dolphins that have been injured in some way. One, a dolphin named Winter, was brought in with its tail missing, probably bitten off by a shark. The vets and local personnel fashioned a prosthetic tail and Winter swims quite nicely. Winter will never be released into the wild. They have otters, a small fish tank with two nurse sharks and many other local fish, and a sting ray tank where you can reach in and touch the rays. There are many volunteers and they give talks and feedings several times per day. All in all, a nice place to visit, but one has to understand its purpose or it will seem very small. 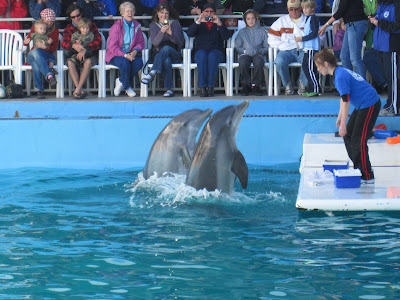 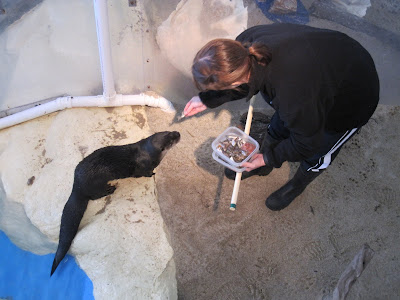 A note about the Sea Turtles. They have volunteers that watch and mark the nests of mother turtles on the beach. Once the nest is identified, they place a cage over the nest so the baby turtles cannot start their journey to the ocean until there are humans there to make sure they go to the water. There is so much ambient light in this area, the babies tend to go to the city. The volunteers pick the hatchlings up, count them, place them in a container and walk them to about 15 feet from the water. This assures that 100% of them make it to the water to begin the long journey of life. Only 1 in 1000 make it to adulthood, 2 years old. In about 5 years, they will return to this beach as adults and lay eggs starting the cycle again. 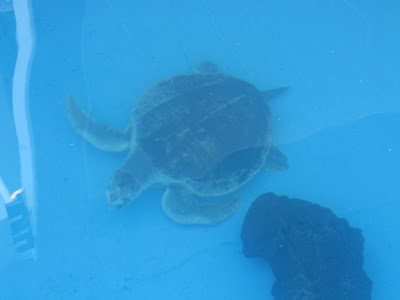 This is very different from the way nests are handled at Topsail Beach. At Topsail, there is as little human contact with the hatchlings as possible. It is thought that the long trek from the nest to the water is a vital part of the hatchling’s development process, getting their lungs working as the trudge their way to the water.