Betsy speaks…We left North Palm Beach this morning heading to just south of Boca Raton. It was another beautiful day, sunny and hot. The scenery was much like what we had seen yesterday: mega-yachts 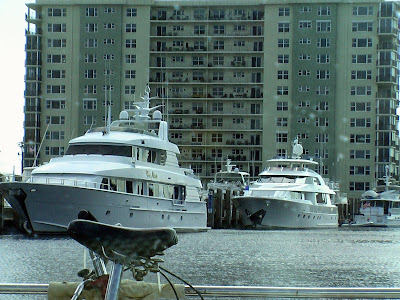 and mega-mansions. The size of these houses is just unimaginable! 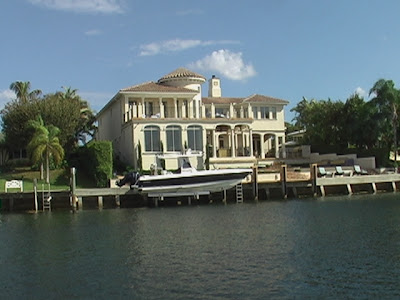 And they’re still building them, as evidenced by these two under construction side by side. 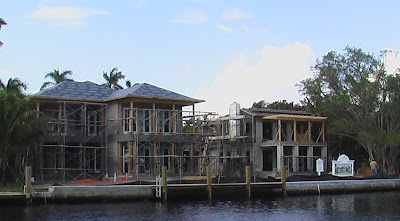 At least the owner of this house has good taste in boats…that’s a Glacier Bay docked in front, same make and length as ours, but without the cabin.

But if you can’t afford a mega mansion or yacht, why not just put a pup tent on top of your boat and anchor out? Seems to work for this guy! 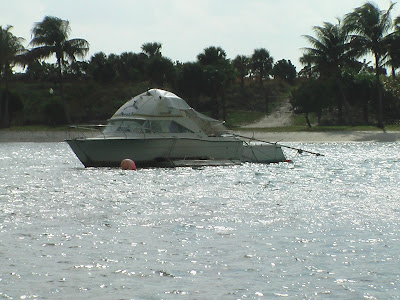 Or buy an old sailboat to live on, and just dock near the rich guys! 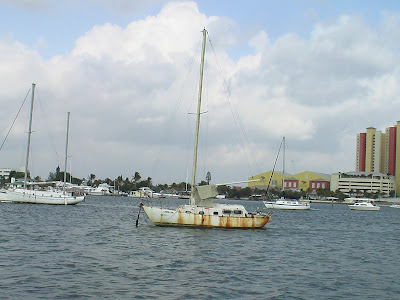 We also see many, many highrise condos, some elegant, especially those in the West Palm Beach area, and some more modest that appear to be older and probably more affordable. 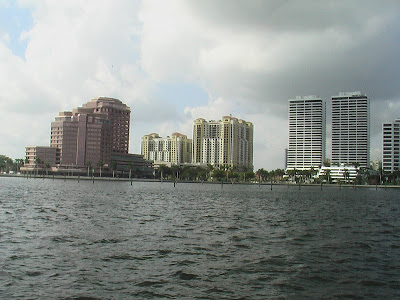 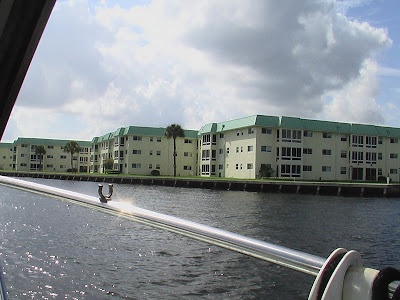 We pass through many Manatee Zones, and are really trying to follow the rules to the letter. But OOPS! We missed one sign. There are several different kinds of zones…some are idle speed no wake, some are slow speed minimum wake, some are manatee zones east or west of Intracoastal Waterway channel but OK to do 25 mph in the channel, so you really have to pay attention to the signs. We were in the town of Lantana, between two bridges in what looked to be pretty open water. There were no other boats around, and the shore was fairly distant on both sides of the channel. I was at the wheel. We both heard a siren, Rick looked behind us and yelled for me to stop, there was a blue light coming on us fast! Sure enough, we were doing about 19MPH in a slow speed Manatee Zone. 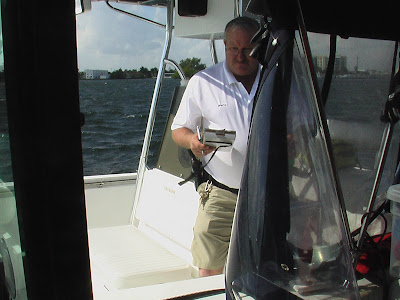 The officer was very nice and seeing that we were from North Carolina and obviously not familiar with the area he just gave us a warning. We were sincerely apologetic. Now we’ll just have to be even more careful until we’re out of Florida!

Up until today we’d only seen two manatees: the one that we saw rescued up in Port St. Joe, and one other one that took a quick dive off to the side of the channel. After our discussion with the officer that stopped us we moved slowly forward toward the next bridge, which is where this particular zone ended. We wondered aloud how the manatees knew where the zones were…how do they know not to go under that bridge?! Just about then, not two minutes after the officer drove off and not 200 feet from the bridge where the zone ended a large manatee came up and immediately dove down right smack in front of the boat! So I’m glad we didn’t hit him, and we continue to wonder how they know to stay inside those zone signs!

One interesting thing we passed today was a 39 foot Silverton being towed by Towboat US. This Silverton is the exact model that we’ve fallen in love with and hope to buy one once we get home to do the loop next time. Later in the day, we saw the Towboat US boat pull into the marina where we are, so Rick talked to him about why the boat was being towed (overheated engine). Not enough to scare me off of the boat I’ve fallen in love with! 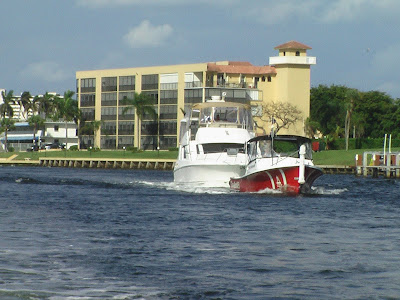 Today we passed through the towns of Lake Worth, Palm Beach and West Palm Beach, Delray Beach, Highland Beach, and Boca Raton. This weekend we will visit with Rick’s nephew Ryan who lives in Boca Raton. Ryan is a college student, studying to be a pharmacist.

We’ve decided to make this our southernmost stop. We had thought we might go to Fort Lauderdale, but after talking to some of the locals we learn that the scenery from here to there is much more of the same: MONEY, MONEY, MONEY. And since it’s not our money we’ve decided we’ve seen enough of it, so we’ve contacted a couple of friends in Fort Lauderdale and told them if they want to see us they’ll have to come here…probably less than 20 miles. The marinas get more and more expensive as you go south.
I don’t think you want to try to outrun the Customs/Immigraton guys here…their 900 horsepower would be able to catch most boats! We saw them cruising out of the marina this afternoon. 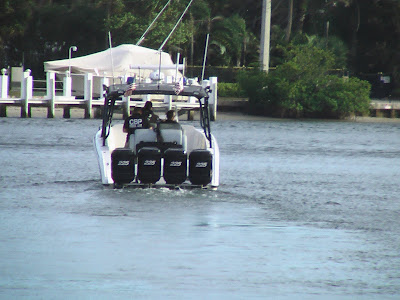 Personal note to my buddy Bill: at your suggestion, we’ve changed our reservations for the space shuttle launch to the Titusville Municipal Marina! Thanks!