[Rick] Our day today was consumed by our visit to the Thomas Edison/Henry Ford Homes and Museum. I am not going to try to describe all we saw, as that would be impossible. I do urge anyone in this area to visit this museum in Ft Myers. Betsy and I were there today for about 6 hours, did not see it all, and plan to return tomorrow for more. 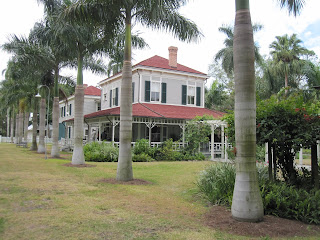 Edison had his home built in Maine and shipped in pieces to Ft Myers, where he had purchased 13 acres for $2,750. The locals thought him nuts to have paid so much. He came here with his new wife, Mina Miller, in 1894 and used “Seminole Lodge” as his winter home until his death in 1931. Seminole Lodge is very nicely furnished, with original furnishings intact, but not gaudy or ostentatious in any manner. It is located on the banks of the Caloosahatchee River and is very functional regarding openness for breezes and enjoying the warm climate.
Edison was named the American Man of the Millennium for the 20th century, and for good reason. He had 1,093 patents issued to him, a record to this day. He had a patent issued each year for 65 consecutive years, another record. He was absolutely prolific, inventing machinery, the phonograph, the electric light bulb, a movie camera and projector, a talking doll, owned a cement business and much, much more. 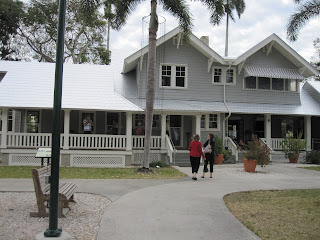 Henry Ford worked in one of Edison’s companies and they became very good friends, especially when Ford asked Edison to invent the necessary batteries and starting mechanism for his “Tin-Lizzie” Model A Ford. In 1916, Ford purchased the house and 5 acre property adjacent to Edison in Ft Myers for $20,000. The house was called “The Mangoes” because of all the Mango trees on the property. The Edison and Fords would remain friends for the rest of their lives.
Both of the homes have been purchased by the City of Ft Myers, renovated, and are open for tours and visitors each day from 0900 through 1730.
I mentioned yesterday about the trips Ford, Edison, Firestone, and William Burroughs would take together. Often the President of the US would travel with them. Here is more detail on those trips. 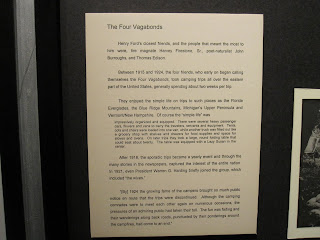 In his later years, Edison, Ford, and Firestone formed a company to try to make rubber from nature and alleviate the US dependence on foreign rubber, especially in times of war. This sounds familiar, doesn’t it? To this end, they planted an enormous number of trees and other plants to study the latex producing properties. They eventually found that a common weed, Goldenrod, was the best source and at one time had over 100,000 Goldenrod Plants.
Another tree they planted was the Banyan tree. The one in the photo was planted by Edison 85 years ago, was 4 feet tall, and 2 inches in circumference. Today, the tree covers over 1 acre. The largest Banyan tree is in India and covers over 20 acres. The Banyan grows by sending down roots from the branches to the ground, where the roots become tree trunks. Everything you see in this picture is ONE tree. You will recall we saw these same trees at the Ringling Mansion in Sarasota. Actually, the Banyan tree is a type of Ficus Tree which is a common house plant. 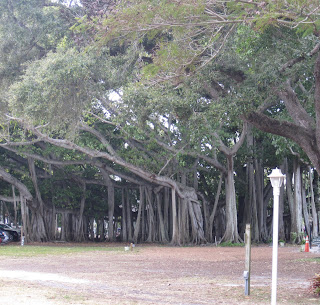 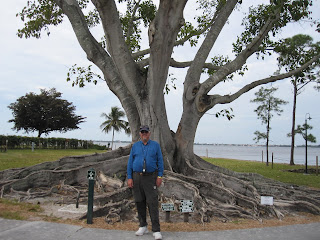 Another tree of the same Ficus genus is the Mysore Fig, and there was a stunning example of this on Ford’s property near the river. This tree does not send out the hanging roots like the Banyan, but has an extraordinary root system at its base, above ground.
Today was a special day at the museum. Some old car buffs had driven a collection of old cars to the site and they were on display. The Packard was spectacular as were the others. 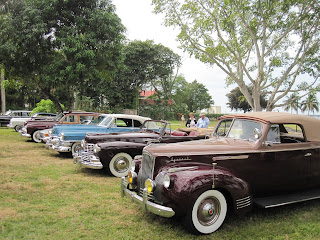 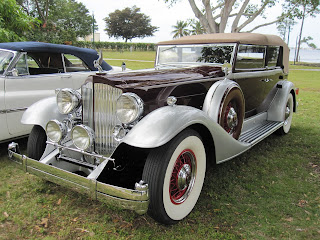 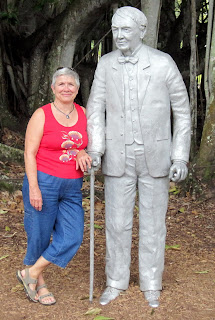 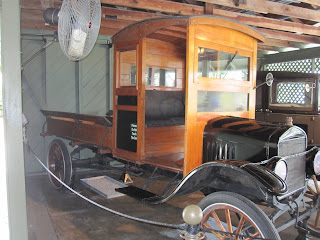 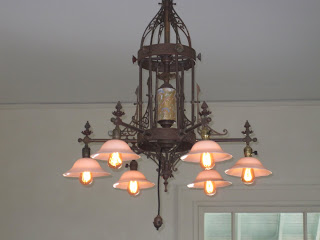 One of the Electroliers in the Edison home.
Tomorrow, if the predicted rain is not too bad, we will go to the Edison Congregational Church and then back to the museum.
Betsy adds: On a personal note, Rick and I were fortunate enough to visit Haiti back in the mid 1970s....it was the first stop on our very first cruise, so of course we've always had a soft spot for it. I still have a mahogany tea caddy that I purchased from a roadside vendor that had to be sprayed for termites before they would allow me to bring it on the ship! We are devastated by the tragedy that has struck this country. We've made our contribution to the Red Cross, and hope those reading this blog will do the same by logging on to http://www.redcross.org/. Thanks.