Betsy speaks: After emptying the waste tank and filling the gas tank, we pulled away from Fort Myers Yacht Basin about 10 AM this morning, heading along the Caloosahatchee River toward Clewiston, FL, on Lake Okeechobee. It was a beautiful day, warm and sunny and not too windy. We were glad we didn’t plan to travel yesterday when the wind was really whipping up waves on the wide expanse in front of the marina.
The several trailer parks we past just east of Fort Myers were a strong contrast to the huge mansions we had passed as we approached Fort Myers last week. We are now entering what is considered “old Florida” where smaller homes and retirement communities of trailers are prevalent.

Not far along, we passed a power plant. There are many manatee zones, where you must go at slow speed, all along this waterway. We were especially careful as we passed in front of the power plant, because the water is warmer near power plants and the manatees tend to congregate there. This has been especially true over the past several weeks when the weather has been much colder than normal, so they congregate in huge numbers in the warm water near these plants. We’ve seen pictures on the news and on the front pages of newspapers of them huddled together by the 100s. However, we were not lucky enough to see any. 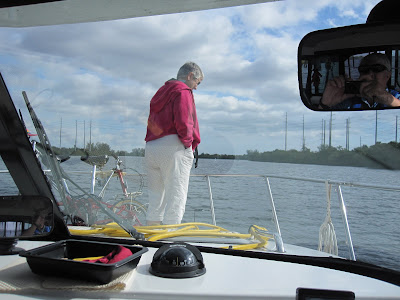 Later, as we approached our first lock of the three we went through today, we heard the lock master warning the boat that was coming toward us out of the lock that there was a manatee just off his starboard bow. So we carefully entered the lock keeping a close watch. Once secure in the lock, we asked the lock master if there was still a manatee in the lock, and he said yes and it was headed in the same direction we were, east. As we were locking up we caught one very quick glimpse of him, but were not quick enough to get a picture.
Shortly after leaving the lock we were passing some houses, still in a no wake zone, and we finally got a good look at a manatee swimming along and then taking a quick dive with a light tail slap. Again, it was too quick to get a picture.
We ate lunch on board while underway, and early this afternoon pulled off in the town of LaBelle to let Beamer off the boat for a few minutes. They had a nice little city dock and boat ramp. 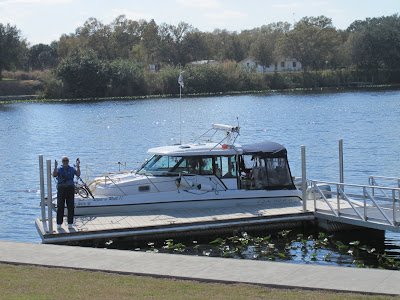 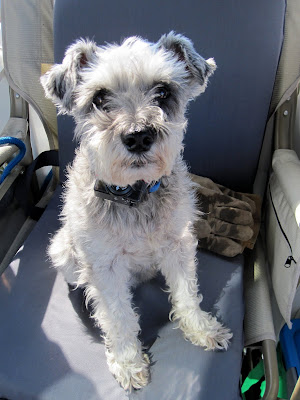 As the day wore on we were on the lookout for more manatees and were hoping to see an alligator. Actually, we were both surprised at how built up it was along this stretch….we had both expected more of a nature cruise today rather than so many houses along the way. Nearly every house in Florida has a screened “cage” surrounding their swimming pool. This one was really huge! 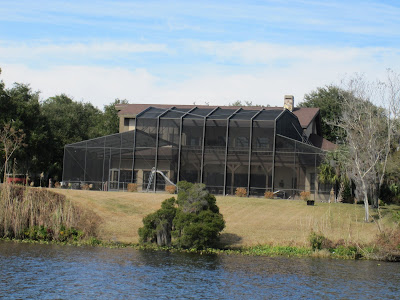 We went through two more locks, for a total of three for the day and a total rise of only 18 feet. The locks were very easy compared to some we’ve been through…small and short rises. These are very much like the locks on the Erie Canal in that there are ropes hanging on the sides that you grab (wearing gloves), but were so much smaller and cleaner than the Erie locks, and the lock masters were very friendly here. There were spectators at each lock, as well, and Rick would always yell up to them as we exited that we charged a quarter for them to watch us! No one threw money at us.

Unlike the locks on the Erie, the Tennessee River and the Trent Severn Canals, these locks do not produce energy. They are strictly to step you up or down. There are no pumps involved. With these locks, they simply open the door slightly once you are inside and water rushes in through that opening and raises the water level in the lock. Once we are across the Okeechobee, we will be locking back down, so water will be released from the small opening in the door to lower us down. We got some great pictures of the water coming into the lock to raise us up today. 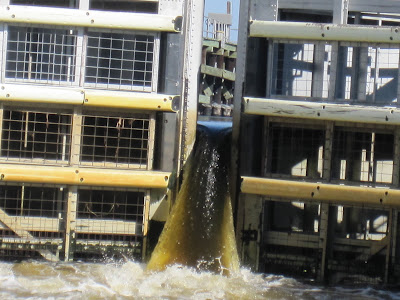 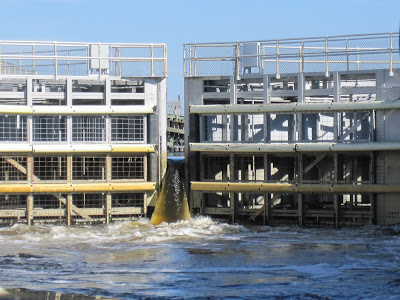 Leaving the final lock we are within spittin’ distance of Lake Okeechobee but can’t actually see it. There is sort of a levee between us and the lake. You come out of the lock and almost immediately come to a “T.” There is a sign indicating that Clewiston (our goal for today) and Stuart (the end of this section of the waterway, on the east coast) are to the right. Once we make that turn, our vista takes a drastic change…now we are in the wilderness that we had expected today! 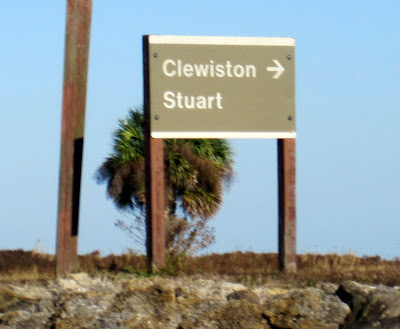 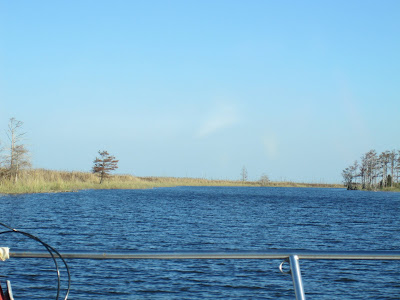 We are now in a narrow passage with virtually nothing on either side. To our right is the mainland but there is nothing there; to our left is Lake Okeechobee but we can’t see it over the strip of marshland. Almost immediately we see our first alligator of the trip, slowly drifting along almost like a log. We got a couple of pictures before he dove.

We did see a couple of more gators along the shore, but by the time we slowed down, backed up and got the camera they had slid into the water. After a couple of false alarms mistaking Ospreys for Eagles from a distance we did clearly see two Bald Eagles high up in the trees right next to each other. How magnificent they are! 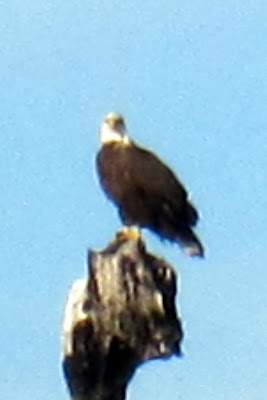 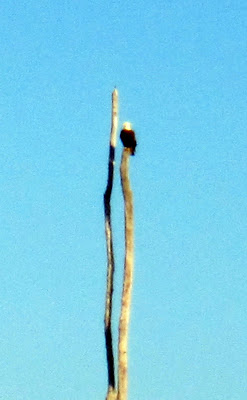 We also saw many, many Blue Herons, Great White Herons and Snowy Egrets, as well as hundreds of cormorants. Our final wildlife thrill of the day was seeing an otter right on the dock shortly after we pulled into the marina.
Arriving at the town of Clewiston, we did go through one final lock, but it was open on both ends and we just went right through with no rise or fall. Actually, this is used more as a hurricane gate than a lock, to keep the town safe from any flooding of the Okeechobee in the event of a storm. Once through that gate, we immediately tied up at the Roland Martin Marina, right next to their Tiki Bar and Restaurant.
We went up to pay the fee, and as we walked back to the boat a couple of guys asked if we wanted a free beer. Seems they had ordered more than they could drink, once they realized that one had to go home and baby sit and the other one didn’t want to have another beer because he had to drive. Rick said he didn’t drink, but I was right behind him and I said I’d gladly take a free beer. So thanks for the beer, Mikey! We admired you both for being responsible young men. We took a picture and told them they’d be on our blog tonight! 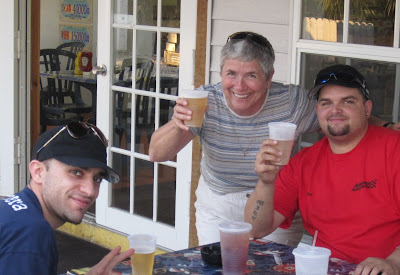 Today was a long day, about seven hours on the water. So tomorrow we’ll stay here an extra day to rest up and do a little sightseeing before heading into Lake Okeechobee on Wednesday.
And a final, personal note. Today is celebrated as Martin Luther King Day, but in my family it is celebrated as June U. Gunter day. My father and Martin Luther King shared the same birthday, January 15, so we’ve always considered this a holiday in memory of my father, who like King was a man of gentleness, peace, and extraordinary wisdom. May they both rest in peace.