Betsy writes: We started the day with hot blueberry muffins and a local newspaper, both delivered to the boat compliments of Sanibel Marina…a nice touch!

Like many marinas, this marina has a yacht brokerage business. There are several brand new boats sitting around for sale, as well as several used boats. We thought it was interesting that they also have a sea plane for sale! 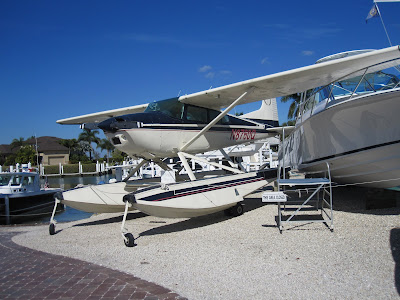 One other comment on this marina...the slips are the narrowest of any we've seen. Fitting into our slip was a test in our maneuverability skills, and I'm glad we didn't have to do it on a windy day! 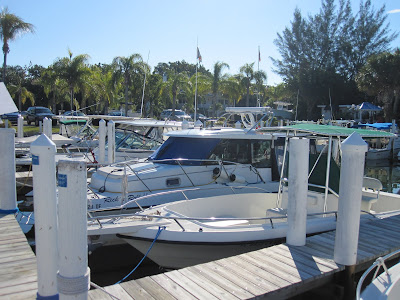 There was some excitement on the dock as a photo shoot for a pet supply catalog took place. Most of the people involved had come all the way from Plymouth, Massachusetts for this. The dogs and trainer I think were local. The dogs were modeling doggie life jackets, and they seemed pretty uncomfortable about it. They just refused to stay when they were supposed to, so it took all morning. They were working on a cover for an upcoming catalog. 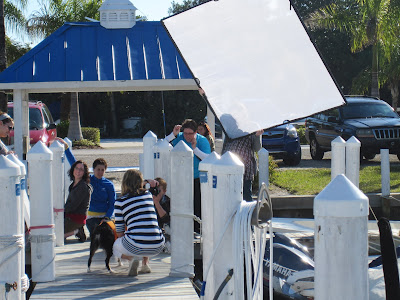 It was a beautiful day with the warming trend still continuing. By lunch time the temps were up to about 70. We decided to take a bike ride into town. I wanted to visit the shell museum that I had heard about, a bike ride of just over 4 miles one way. There is a wonderful bike path throughout the town, with areas along the way for you to stop and rest or get water, all very flat. This is a very nice feature in any town! By the time we got to the museum Rick was ready to head back to the boat, so I went in by myself. He really just came along for the exercise, knowing I would want to window shop all the way back. 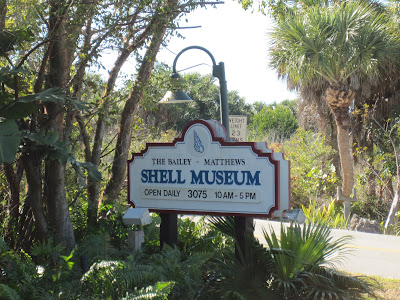 I really enjoyed the museum, which had exhibits not only of local shells but of shells from around the world. The first exhibit was of tiny shells, some no larger than a grain of sand, and this is as large as they ever get. It was pointed out that you are walking on these whenever you walk the beach and don’t even realize it because they are just in with the sand. The most fascinating thing to me was the display of “Sailor’s Valentines,” beautiful shell art that was mistakenly attributed to sailors but was actually bought by sailors to take home to their wives, etc. These things were absolutely gorgeous, and I can’t imagine the amount of work that must go in to them! Read the explanation in the picture below. 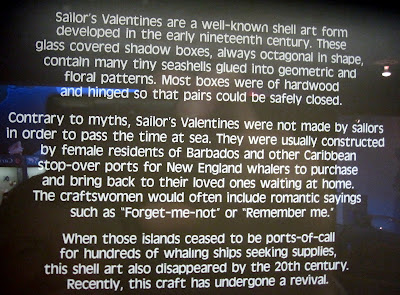 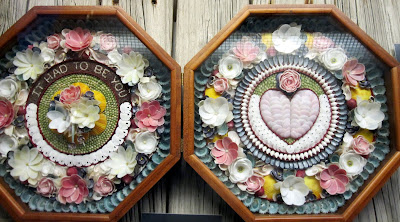 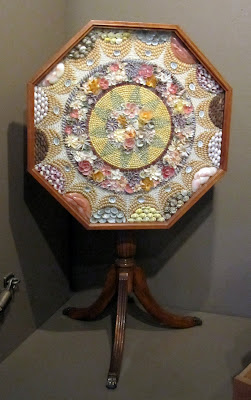 Pictured above is a tilt top table made with one of the Sailor's Valentines as its top...beautiful!

The museum also had a couple of 30 minute videos, one of which I watched and found very interesting. It showed how to identify tracks, how conchs and whelks capture and eat food, where to dig to find undersand treasures based on things you see on the surface, etc. I didn’t have time to watch the second video, so I’ll have to come back again on our next trip!

As you leave the museum you pass an exhibit of a county fair where all the people and animals are made from shells. It reminded me a little of the wonderful miniature circus we had seen just last week at the Ringling Museum, although it was not nearly as intricate. 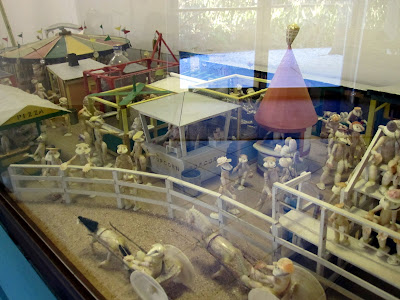 I had a very leisurely bike ride back, stopping in shops all along the way. I’ve decided Sanibel is one of my favorite stops of the trip, a perfectly beautiful island with a lot to offer vacationers.