START SPREADIN’ THE NEWS….WHEW!! WE MADE IT TO NEW YORK, NEW YORK!

Betsy here: I was a little apprehensive as we pulled out of our slip at 8:30 this morning heading for Manasquan Inlet, just minutes away from the marina. I had seen several fishermen come in already. I asked a couple of them how it was outside, and they kind of groaned and said “real choppy.” But the weather radio was still calling for 1 to 2 foot seas, so we decided we had to at least give it a try.

The inlet is a straight shot out, with rock jetties on both sides. But it is rather narrow, so the waves bounce off the rocks and create turbulence. As we were entering the inlet, another boat was coming in from offshore, and I maneuvered by it OK. But then just as we were coming to the end of the jetties, and could see waves breaking in front of us a very large sport fish boat rounded the corner to come in. I know he was fighting the waves, but he passed right in front of me and made no attempt to slow down He was putting out a huge wake that then bounced off the rocks. We took two huge waves that completely enveloped the boat, but we bounced right back from each one. Fortunately we had all the windows and hatches closed and the “den” zipped and buttoned up. It was very rough, but I could see the sea buoy in the distance, and I just felt if I could get out there things would be better. I surely didn’t want to turn around and go back through the inlet!

Once we got a little farther off shore it was still pretty rough, I’d say closer to three feet than the one to two that was forecast. But I kept telling myself it wasn’t as bad as what we had been through in the Chesapeake Bay last year when we crossed from Portsmouth to Onancock. Once through the inlet we never took water over the bow again, and the swells were coming at a favorable angle. So we forged ahead, and once we made the slow curve around Sandy Hook, about 25 miles, things really calmed down to the forecast level. We passed within sight of several trawlers that were probably also loopers that were really rocking. At least with our speed we got through the bad part quicker than they did! We were doing 15 – 20 MPH most of the way.

Seeing the New York skyline in the distance was really a thrill, but we weren’t able to take pictures because we were both holding on tight as we rocked! Rick would have killed for one swallow of Pepsi, me for one sip of coffee, but we would have spilled it all over ourselves if we had tried! 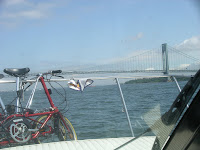 Anyway, we finally made it to the Verrazano Narrows bridge and soon had Lady Liberty in sight. I turned the wheel over to Rick and crawled out on the bow with camera in hand and started taking pictures. Every looper takes the obligatory photo of the bow of the boat with the Statute of Liberty in the distance and the AGLCA burgee proudly flying on the bow rail. We normally fly our burgee on top of the cabin attached to the all-around light, because its flapping on the bow is distracting to me when I drive. But this morning before we left we had transferred it to the bow rail, right in the middle. Those waves that nearly sank us in the inlet had knocked it down so it was in a horizontal position, but I quickly propped it back up once I got on the bow in New York Harbor. 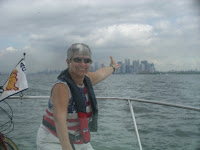 I was hoping for a sun shiny day, and it was sunny for the most part. Some clouds came in just as we were entering the harbor so some of the pictures of the skyline are a little foggy. But overall it was an overwhelming experience. There was not a whole lot of ship traffic, but there is always a lot of ferry and sightseeing boat traffic and we experienced all of that with no problem. 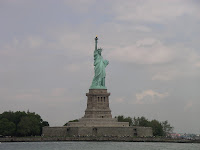 We passed the Statue of Liberty at approximately 11:30, exactly one month to the day and almost to the minute from when we left our slip in Sneads Ferry. Then we meandered up the Hudson River intending to go to Tarrytown, where we did have reservations for the night. But as we passed a marina that we had considered and decided against, we changed our minds and decided to see if they had room for us. We are at the 79th street City Boat Yard, right on the Hudson, just before reaching the George Washington Bridge. So we are within walking distance of Central Park and a quick metro ride from Times Square. There is a very busy city park along the waterfront right where we are, with lots of joggers, bikers and dog walkers right along the water’s edge. A very nice spot, with a nice restaurant, the Boat Basin Café. And we’re on a floating dock which was very easy. We are rocking a little with wake from passing ferries, but not as bad as where we were yesterday. The rocking almost ceased as soon as dark arrived and the boat traffic subsided.

Once we got settled in, we walked a couple of blocks to an optometry shop for Rick. He had an eye exam and has ordered new glasses, which will be ready late Wednesday afternoon, so we’re here for a couple of days. Not bad…Manhattan for $81.50 a night. Free ice, free laundry, no tipping allowed.