WE DO PUBLIC!
Here we still sit in New York, waiting for the pouring rain to stop. It has been pouring all night, and never stopped this morning. It is now lunchtime, and anxiously watching the weather radar to see if there is any chance we can get out of here this afternoon. Even if we can only go a couple of hours, we’d like to make some headway. The Rick ‘n Roll is really rocking and rolling in our current spot, due to strong current and heavy wakes from barges and ferries passing by.

So since there’s really nothing to tell, we wanted to talk a little about “doing public.” Our close friend and fellow boater Dauna Gable travels with her husband Toad on a 45 foot Tollycraft. They have two staterooms, each with a full bath with real showers. They never have to use the facilities at marinas. One of Dauna’s favorite sayings is “I don’t do public!” She just can’t stand the thought of using a public shower.

On our boat, we have a marine toilet with a very small holding tank (10 gallons), and a pull-out handheld shower that tends to spray water all over the bed if you’re not careful. So WE DO PUBLIC! Starting last year when we stayed at a marina on the Potomac River that had the most awful showers we’ve ever seen, we’ve sort of rated marina facilities on a 0 to 10 basis. 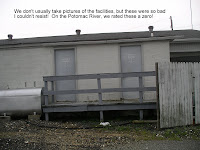 The zero rating (we won’t name the Marina) had a shower that was full of mildew, a drain that didn’t work so you were standing in ankle deep water by the time you were through, no shower curtain so water ended up all over the floor even outside the shower, toilets that I couldn’t stand to even look at. I didn’t even want to brush my teeth in the sink! We only stayed there because we were desperate after a long day and there was nowhere else nearby to stay.

A five rating might apply to the marina we are currently staying in. This is an older facility, actually run by the City of New York as part of their parks program. One obstacle is that there is only ONE shower, unisex. Just outside the door that leads to the shower is the laundry, one washer and one dryer. The nice thing about them is that they are free! Another door leads to the ONE toilet, unisex. In the shower room there is no place to put your soap or to hang your wash cloth. There is no shower curtain. But it is sparkling clean and the drain works great. There are several hooks on the wall to hang clothes and your towel, and we did move a plastic chair into the room to have someplace to put our bags. Even though there is just the one shower and one head, we’ve never had to wait. One of us goes up there first thing in the morning, then we phone the other person as we are nearly completion. 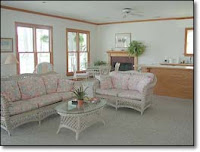 I’m not sure we’ve had the ultimate 10 facility yet…you always need to leave room for improvement. But we have had a couple of good nines. Our favorite location is Dowry Creek Marina near Belhaven, NC. There are four individual rooms, each with an outside entrance. In each room has a nice shower, a private toilet, a nice sink. There are plenty of hooks and a bench. They are always clean. Dowry Creek also has a first class Captain’s Lounge, complete with cooking facilities, cable TV, nice sofas to sit on, a nice wrap around porch with rocking chairs, and a swimming pool. They offer a courtesy car for a ride to town for groceries. Like many marinas, they have a nice book exchange…take a book, leave a book. Pictured at left is the Dowry Creek Lounge. 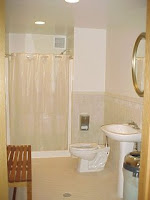 Morehead City Yacht Basin and Utche’s Marina in Cape May rank just behind Dowry Creek because neither of them have the wonderful Captain’s Lounge. They do both have a lounge, but Utche’s doesn’t have a TV, and Morehead City closes when the office closes at about 6 o’clock. But they do both have shower/head facilities that are as good or better than Dowry Creek, so I would rate them and 8.5. I think I mentioned in an earlier BLOG that Utche’s is so proud of their bathrooms they have a picture of them in the cruising guide! Here is the picture.
Oriental Marina provides towels, soap, shampoo…a nice touch. Several marinas provide soap and/or shampoo. Generally we find that the price of dockage really says nothing about how good or bad the facilities will be. Farley State Marina, run by Trump’s, is a good example. It was the most expensive place we’ve stayed yet ($4/foot on weekends), but the facilities were only mediocre with no extras.

The showers at Atlantic Yacht Basin were OK, but there was no curtain on the window in the ladies room! Granted, the window was high, but if someone was working on either of the two boats parked just outside they could have gotten a good peek! Rick said the pressure in the men’s shower was terrible because the shower head was old and corroded, so he went to the hardware store, bought a new shower head, and replaced the head! It was the least we could do for a marina that gave us free dockage for 4 nights! So we might give them a 6.

Rick does not hesitate to tell proprietors what they need to do to improve shower facilities. His favorite pet peeve is no hooks on the wall. We think every proprietor should take a shower in their own facilities every now and then to realize what simple little things could make a difference. Things we consider important and easily remedied are: cleanliness, LOTS of hooks on the wall, a bench or chair to put your stuff on, and a rack or ledge inside the shower for your soap, shampoo, razor, etc. These are things that even the most basic facility can and should provide.

I’m sure you’ve heard all you want to hear about “doing public.” It’s after 1300 and still pouring rain, so we’ve just made the final decision to rock on here one more night….Betsy