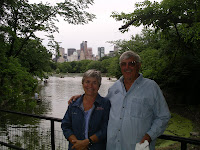 Today we just sort of relaxed in our West Side Neighborhood. This morning we rode bikes along the waterfront. This afternoon we walked the five blocks to Central Park and strolled around. It is really beautiful! And peaceful! We just missed seeing a wedding at the Strawberry Fields area that is a monument to John Lennon. There is a mosaic on the ground that says simply “Imagine”. The bride and groom and the preacher were just signing the official papers when we walked up…she in full white bridal regalia. 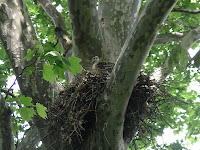 In the Riverside Park where we are docked, there is a Red Tailed Hawk’s next with babies that have just come out of the nest and started flying in the past few days. They have attracted quite a crowd of people with binoculars and fancy cameras. We’ve had several very good sightings. 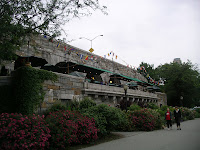 We’ve been fascinated by the architecture of the city…I love the row houses, which I guess are mostly apartments or townhomes. I’d love to go inside one just to see what it’s like. One of the most interesting pieces of architecture is the Boat Basin Café, right next to our dock. It is gothic in design, and apparently used to be a depot of some sort for ships bringing in cargo. It is built under a traffic circle, very interesting and hard to describe.

Rick picked up two new pairs of glasses this afternoon, so hopefully these will last the rest of the trip. He made sure to get a written copy of his prescription just in case! The people at the optometry shop were super nice and he is very pleased with the new specs.

Since there’s not much to say today, we felt like the Naked Cowboy deserved one more photo! Will this be our most lasting memory of New York City…I don't think so. 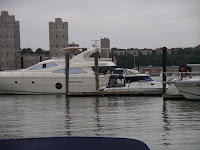 As usual, our boat is one of the smaller boats in the marina. The 62 footer we’ve been docked next to all week had a party of some sort this afternoon, with 20 or so people aboard all dressed to the nines. I’m sure the owner wasn’t too pleased to have us right next to him, with our towels hanging out to dry, the filthy line at the waterline, the bikes lying on the dock, the dinghy hanging off the top. I often look at ours in marinas and feel like we must look like the Beverly Hillbillies! But we’re having way more fun than most people, so who cares! Not only that, our boat is paid for! I think a lot of loopers share this sentiment. 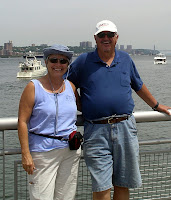