Betsy here, sitting in the boat drying out! It started raining while we were at dinner tonight, and its still coming down strong at 11:30PM. During breaks in the rain we ran back and forth to the laundry. Then once the laundry was done and bedtime drew near, I had to walk Beamer. One problem with Annapolis is there is no where to walk the dog! There is either concrete or brick walkways everywhere. If there is any grass it is in someone’s private yard with fences or signs indicating that dog walking is not welcome! We’ve found a place across the canal from where we are staying, so about a 3 block walk, that’s just a little patch of grass between a parking lot and a building and that is the only place poor Beamer will “go”. When Beamer and I left the boat, it was drizzling steadily, but by the time we got back the sky had let loose and we were both drenched to the bone! 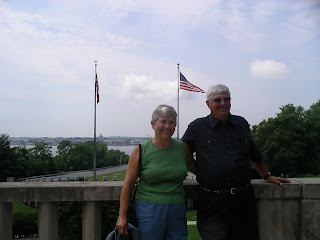 Other than the rain, today was another great day touring Annapolis. We took a 1 hour trolley tour this morning. This afternoon I toured the William Paca (a signer of the Declaration of Independence) house while Rick rested up. 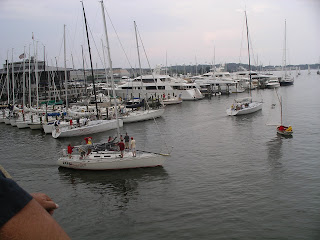 We had chatted with a couple in Solomons that live in Annapolis, and they told us about the weekly sailboat races on Wednesday afternoons. So at 6PM we stood on a bridge over Spa Creek and watched a huge number of sailboats preparing for the race, then motoring or sailing out from the yacht club just below the bridge out into the harbor. The couple we had met, Maria and Bill (we never got their last names) were easy to spot in one of the very small sailboats…there were only 4 of that small size. The rest of the boats were much larger, some with 10 or more people on board. Unfortunately, there was no wind, so eventually the race was called off, but we still enjoyed watching the rigging and the boats heading out getting ready for the race that never was. Maria and Bill invited us to the yacht club for a drink afterwards, which was a real treat. They were the ones that suggested we try to get dockage here at the City Dock, which has been a wonderful location (even though its very noisy at night because there are several nearby bars with loud music). They also suggested dining at McGarvey’s restaurant, which we did and it was superb!

Tomorrow we head for Baltimore, just a short distance. We’re hoping the weather will clear up. The weather forecast has called for thunderstorms every day, but they’ve held off until late in the day or evening, so we’ve been lucky. We’ll probably spend 3 days in Baltimore’s Inner Harbor, near the aquarium and other major attractions.