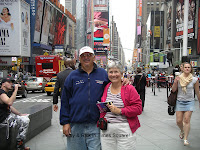 Betsy speaks: Today we took the metro to Times Square, just 5 stops from where we are staying on 79th Street. We just ambled along Broadway, window shopping, marveling at the New York sights that seem so familiar because you see them on TV all the time – the flashing signs, the theaters, just the overall New York experience. If we had a goal, it was to see the David Letterman Theater, and maybe the Hello Deli…if you don’t watch David Letterman, there’s no reason for you to read further because you won’t know what we’re talking about. 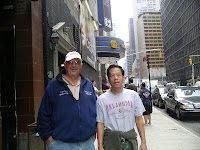 At the corner of Broadway and 53rd Street, we saw the David Letterman Theater, and even stepped inside. No photos allowed once you are in the front door. We were given the opportunity to sign up for the lottery drawing for tickets, but opted not to do so. We then walked just around the corner and saw the Hello Deli. It was a couple of minutes before noon, so we decided to eat there. The place is tiny, tiny, tiny. There’s room for only about 5 people to sit down. We ordered at the counter, and were lucky enough to get a seat. Immediately after we sat down, the place started filling up, with people lined up out the door to order. I guess the crowd really starts right at noon and we just beat it. The food was wonderful…we both had beef stew on rice. Rupert Jee wasn’t there, but we heard someone else ask about him and I thought the lady behind the counter say he usually comes in around 3 o’clock, so I figured we wouldn’t see him. I took several pictures inside even though he wasn’t there. We finished lunch, and as we walked out the door, there was Rupert just walking up about 10 feet away. I squealed “There’s Rupert!” Rick was right next to 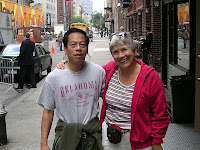 him, so I pulled out the camera and shot a picture of them together, then handed the camera to Rick and he quickly took a picture of Rupert and me! We told Rupert how much we had enjoyed lunch and he thanked us for the business. Then he went inside and we walked away. Then I thought it would be cool to get a picture of him behind the counter, just like you see on Letterman, so I went back in and sure enough he was behind the counter taking orders. So I snapped a couple of shots, waved a thanks, and went on.

At every street corner there are vendors trying to sell you tour tickets or theater tickets. We had asked earlier how much a tour was….$44 each. Theater tickets to the good shows are around $100 each. We got tired of saying “no thanks” every time we were approached. After meeting Rupert, each time I was approached by a vendor my response became “I met Rupert Jee for free”…needless to say I got some strange looks.

We paused on our way back to Times Square and enjoyed some street performers (“buskers”) break dancing…about 5 guys and a couple of girls, really limber and good. We tossed a couple of bucks into their bucket. Then saw some guy playing the pan flute, and then, the real thrill of the day…we saw the Naked Cowboy! It was funny, we had just passed by some artwork that had a couple of pictures of him and we chuckled, and then about a block away there he was. Too bad we’d put all our dollars into the bucket for the break dancers and didn’t have anything to offer the Naked Cowboy so I didn’t get my picture taken with him, but took several pictures of him with other women!

After several hours we were tired and overwhelmed so took the metro back to our stop and walked back to the boat after picking up a few groceries. We had dinner tonight with a couple of other loopers that we met this afternoon and that was nice. They are from Michigan and are doing the loop on a sailboat, started in September and will be home in August. They admit they haven’t been able to sail much. They spent several months in the keys and Bahamas, which we don’t plan to do..

On the home front, we owe a tremendous debt to our neighbors Billie and Tom who are watching our townhouse for us. They’ve taken care of getting the leaky heat pump fixed, and drying out the carpet that was saturated, which involved moving bookcases and furniture. Thank you Tom and Billie!!! It is great to have good friends, and we hope they will still be our friends when we return!

Tomorrow we plan to get the bikes out and just ride the bike path that goes along the waterfront from one end of Manhattan to the other. Today we reached 2300 hits on the web page, and we still have people signing our guest book every few days. Thanks to all of you for keeping up with us!