Betsy speaks: I was thrilled to have my lifelong friend, actually from nursery school, join us in Waterford. We debated whether she could stay on the boat with us, and knowing Louise was a girl scout like me and did a lot of camping in the past, she and I decided we could make it work! So we converted the dinette table into a bed, we all slept in more clothes than usual, and we had a ball! However, I don’t think any of us would recommend further overnight visitors! Too bad Louise had to join us on a night when I would rate the facilities only about a 3 (scale of 0 – 10), but that’s what you get when you stay at a FREE dock! They were clean if not elegant and that’s what really matters. We took full advantage of her visit, letting her buy our dinner, take us to the grocery store, and two trips to West Marine about 25 minutes away.

We departed Waterford just after noon and went directly into Erie Canal Lock 2 (there is no Lock 1, long story). The first 5 locks are in quick succession, and Louise followed along in her car and met us at each lock, waving and taking pictures. When we made it through Lock 6, we waved good bye and she started on her 4 hour drive back to New Hampshire. The first 5 locks are the "crown jewel" of the lock system. You rise 163 feet in less than 2 miles. This is over twice the rise of the Panama Canal. Almost 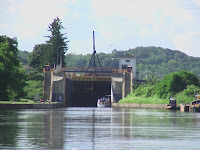 immediately thereafter, the black cloud that had been threatening us through each lock broke loose and it poured rain for about 10 minutes. Then the sky cleared and the rest of the afternoon was perfectly beautiful. The Erie is just beautiful, glassy smooth. There are very nice houses along some stretches, and nothing but nature along others. We saw several small waterfalls. This is a picture approaching Lock 7 on the Erie Canal. A sailboat with 3 French Canadians are already in the lock, having passed us as we filled up with gas. 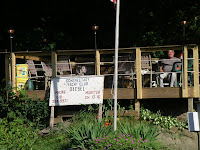 We had always thought the lockwide speed limit was 10 MPH, but that turns out not to be true. It is actually 45 MPH except when you are approaching a lock or a bridge, or of course any marina or other no wake zone. So we saw people waterskiing and wakeboarding. We went through one more lock along the way and finally stopped late afternoon at the Schenectady Yacht Club. Don’t be fooled by the name! It is nothing fancy, just a rundown set of floating docks that offers all amenities. The cost is a mere $1.25/foot, including electric.

Now I want to tell you about “Freddy Freddy”. Three years ago we were docked for just a few minutes at the Carolina Beach State Park Marina on our way to or from Myrtle Beach when in behind us pulled what looked like a beat up old trawler with two elderly people on board. The name of the boat was “Freddy Freddy.” We marveled at the boat’s design, and at the fact that it looked like it had seen its better days. Its just a sight that we both remember vividly. Then last year, we saw that same boat in the Chesapeake Bay, anchored out in Solomons. We both knew it was the same old boat we’d seen before, and I actually took several pictures of it because it is so unique. 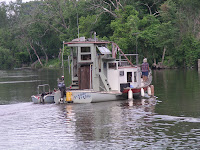 Then, 3 days ago as we were coming up the Hudson River between Haverstraw and Kingston, way off to the side of the river there was that same old boat chugging along! (We found out later it is powered by a 27 HP diesel engine; the boat is 39 feet long). I looked at it through the binoculars and just couldn’t believe that we were seeing it again! That night I actually looked at the pictures I had taken in the Chesapeake to confirm that it was the same boat. When we pulled into Waterford yesterday, we were lucky to get the very last spot at the free town dock, and we pulled in right behind that same boat. Incredible! We finally got to meet, and get to know, the two “elderly” people on board, Floyd and Della. It turns out the boat is not nearly as old as it looks (and neither are the people). Its just painted a steamship gray and has a design like that of an old lobster boat that makes it look old. It was designed and built by Floyd himself out of plywood covered with layers of fiberglass, and is actually only about 7 years old. Della didn’t like the idea of having a head inside the boat because she was concerned about odor, so the head is on the very back of the boat, sort of like an outhouse. They live on the boat full time and just travel from place to place, anchoring out about 99% of the time rather than staying in marinas. They stayed on the wall in Waterford only because it was free. Floyd seldom uses a GPS, and has none of the fancy electronics that most boaters rely on.

Floyd and Della had done the entire loop about 2 years ago, including the entire Gulf Coast over to Texas and around the Florida Keys. The Erie Canal was their favorite part, so they are back to do that part again. They do not take the turn into Canada as we will do, but do the Erie the entire way, which is unusual for Loopers. I think they don’t have some of what would be required in Canada (like a rabies shot for their cat), so they just stay in the states.

Anyway, it was a treat to finally meet these interesting people on this most interesting and well travelled boat!

Here is Rick, working the lock. 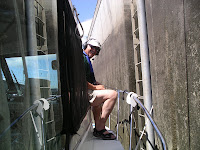