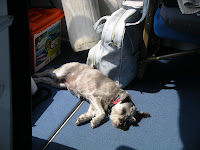 Rick writes: We made the 52 mile trip from Cape May to Atlantic City, NJ. While most loopers choose to go out into the Atlantic Ocean and enter Atlantic City via the Absecon Inlet, we chose to go by the NJ Intracoastal Waterway, the “inside route” that traverses NJ from North to South. It is much like the Atlantic Intracoastal Waterway through NC, but more densely populated. We did this because we wanted to sightsee and have some view as we travelled. We could do this because we only draw 30 inches of water and the bigger boats draw much more, sometime up to 5 feet. However, we did everything we could to have a successful trip. We left two hours before high tide giving us at least 5 hours of above mid-tide level, we watched the markers, we stayed in the channel, and we did not travel at night. We never saw less than 7 feet of water below the boat. Yes, there are “no wake” zones and 8 bridges (we had to stop and wait for only two, due to our low air-draft of 9 feet) to traverse, but, it was quite enjoyable. We did stop once for about 30 minutes due to FOG, but we used the time to fill up with gas, 111 gallons at 2.70 per gallon (do the math). BTW, we hold 190 gallons of gas in two 95 gallon tanks. Beamer, tired from the excitment of Cape May rested in preparation for Atlantic City. 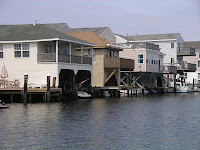 Seeing the NJ towns from the water is very scenic. Many homes are built right out on the water on pilings and they drive their boats up under the house. No CAMA in New Jersey, I guess. 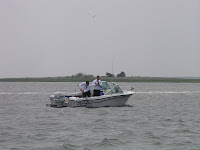 Small boats were fishing everywhere along the way, and of course, they can only catch fish in the middle of the marked channel. We saw one small boat with two men in black suits and ties fishing. We really enjoyed seeing AC from the back side. 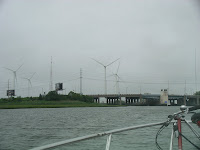 The local power company has 5 gigantic (300 feet tall, with three 200 foot blades) windmills producing power. They are quite spectacular, and once you realize what they do, they are not obscene or ugly.


We are staying at Farley State Marina, managed by the Trump organization. It is the most expensive we have encountered thus far, $3.00 per foot in the week and $4.00 per foot on the weekend. Like everything in a casino, every square inch and operation is designed to legally separate you from your money. On the other hand, they have very nice facilities, close to the “action”, bus and jitney rides in front of the hotel and multiple eating places. There are less expensive marinas in the area, but none have the convenience and completeness of Farleys.

About 5 days ago, I broke the frame of my glasses. Luckily, I brought a second pair along (also a requirement of my Master License). I found a glasses lab today to put my old lenses into new frames, so now I have frames that make me look like the nutty professor, large, black, but “back in style” as the optician told me.

You know the saying, “What happens in Atlantic City, stays in Atlantic City”. Since we are staying here for 4 days, we will not be writing a blog each day. Check back about Sunday or Monday for the latest. Ta-Ta. 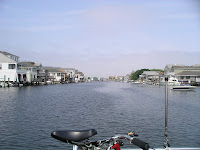 Venice of America. A look at the houses on the NJIW.