We depart Utica and head for Oneida Lake. This involves about 30 miles and three locks. The good news is that 2 of the locks, 21 and 22, are taking us DOWN. Locking down is much easier than locking up, as you do not have the turbulence in the lock chamber. All of the turbulence is outside the chamber gate. We descend to the level of Lake Oneida. 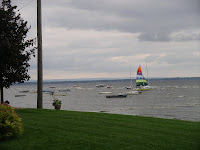 The town at the Eastern end of the lake is Sylvan Beach. This town is a throwback to the beach towns, like Topsail and Atlantic Beach used to be. They have a huge tourist business, swelling from 1800 population in the winter to 18,000 in the summer. The town has an old timey arcade, amusement park with rides, roller coasters, putt-putt, etc. They also have a bandstand with live music every weekend. Every type of food is available including a restaurant named Eddie’s. This restaurant was started in 1934, and has managed to survive under the same family management. We met Eddie Jr., who is now in charge, but his son really runs the business now. He also owns several blocks of the waterfront property. He gave Betsy a Sylvan Lake shirt, just for chatting with him. 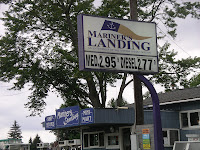 We stayed at the Mariner Marina, a business of the Oneida Indian tribe. This is a huge campground and marina combo. It is quite old, but acceptable. We gave the showers a 5. They were very friendly and helpful in docking. In one of those deals where the plan does not match reality, they charge a $5 deposit for a shower key. But, when we went to check out the showers and when we went to actually shower, they (all 3) were open and not locked. So the key was worthless, except to return it for the $5 refund. 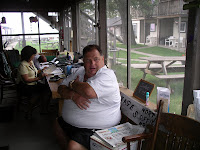 We did eat supper at Eddy’s restaurant. It was huge, crowded, and the food was excellent. Their specialty, from the mother, was pies of all type. Here is a picture of Eddie Jr. He is the official pie taster. Eddie was quite a character and loved to tell stories of how things used to be. I think at one time his parents owned half the town. 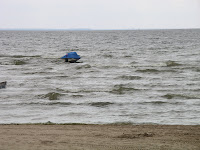 The lake has no natural current and no tide, so people just tie their jet skis and boats and walk out to get them. Three hundred yards out from the shore it is only waist deep.
The beach looks like Topsail, but it is not sandy, rather more like whiter dirt. Not granular.
Here is Betsy in front of the beach. 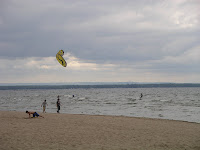