12-29-09 Clearwater, FL and the Christmas Holidays

[Betsy] If you are only interested in the Loop itself, you need read no further! We’re still in Clearwater, Florida, so there’s nothing new as far as cruising or adventure is concerned! So if you read further, you’ll just be hearing about how we spent Christmas and about seldom seen family members.

We had a rental car for the week of Christmas. Wednesday night we drove over to Tampa and met our sister-in-law Tina and her daughters Trina and Tara at a restaurant. Pictured below are Trina, Tina, Tara and me. 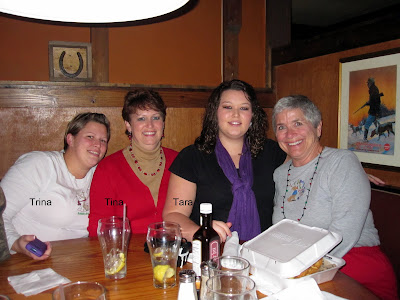 Then on Christmas Eve we headed back to Zephyrhills to join in the Christmas Eve celebration with Tina’s family. We left Clearwater early and spent a couple of hours at the Hard Rock Casino in Tampa on the way to Zephyrhills. I started out with a nice winning run at the 3 card poker table, then had a great run at the blackjack table. Rick, who seldom gambles, watched a little 3 card poker, and when I offered to stake him a little of my winnings he played a few hands and also came away a winner. I hope I haven’t created a monster!

Arriving in Zephyrhills, we joined Tina at her mom’s house. We had celebrated Christmas Eve with them before several years ago so we’d met all of her family. Her mom already had a wonderful spread of turkey and all the trimmings ready for people to help themselves as they arrived. Their gathering is very informal, held in the back yard (you can get away with that in Florida!) The food is plentiful and delicious. We finally got to meet Billy, Trina’s husband of three years.

Part of their tradition is to have a bonfire on Christmas Eve. Those of you that receive our Christmas card each year will recall that for the past several years we have been on the RiverBarge on the Mississippi River. A Cajun tradition is to build bonfires on the levee and light them on Christmas Eve so “Papa Noel” can find his way to their homes. Those bonfires, huge pyramidal structures filled with firecrackers and fireworks that can be seen and heard for miles, are truly spectacular and a thrill to behold. The bonfire this year didn’t compare to that fabulous spectacle, but it was fun and we even enjoyed roasting marshmallows and making S’mores. 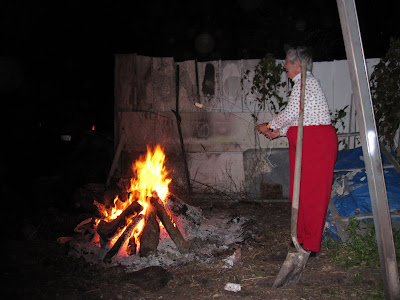 Christmas Day started out chilly and overcast. We had no real plans. We did exchange cards, and opened the one gift we had received last night “from Santa”…4 Florida Lottery tickets. Total winnings $4.00. 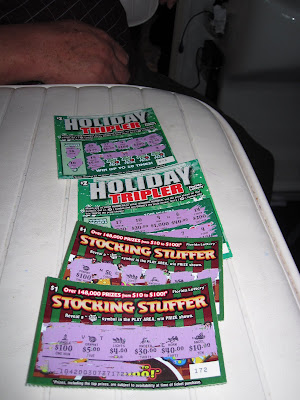 I had investigated going to a Christmas Day buffet, but at nearly $30 per person we decided our money could be better spent elsewhere. So we had Christmas dinner at the local IHOP, which did have some Christmas specials: Rick had Pecan Pie Pancakes, and I had Gingerbread Pancakes with Christmas sprinkles! 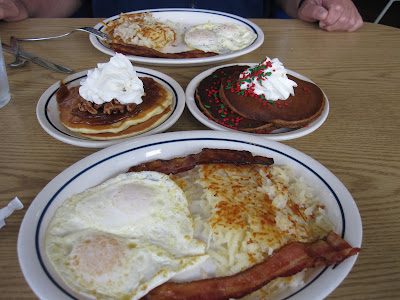 By early afternoon the sun had come out and it had warmed up considerably. We decided to explore some of the little beach towns to the south, so we rode down the beach road for about 20 miles. At Madeira Beach we parked the car and walked out on the beach for a few minutes. Many people were out strolling. It would have been much warmer if the wind hadn’t been blowing. The Gulf of Mexico looks just like the ocean on a windy day, with waves breaking at the shore. One thing we’ve noticed that we don’t like is that dogs are never allowed on the beach. We had seen the signs in Clearwater indicating this, but it surprised me that it seems to be that way everywhere, even in the smaller beach towns. We are thankful that at Topsail Beach where we live dogs are welcome, though they do have to be leashed during the summer months. 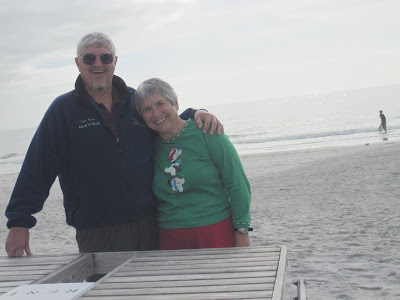 We returned the rental car on Saturday morning, and since Rick’s bike is still in the shop and the weather has really been too cold to do much outside, we’ve spent lots of time on the boat reading, etc. Sunday we were pleased to have Tina and her daughters Tara and Trina and Trina’s husband Billy join us for lunch at Crabby Bill’s restaurant right here at the marina. Then we all went for a short boat ride, the first time the boat’s been away from the dock since we arrived here nearly two weeks ago. Pictured below are Trina, Tina, Rick, and Trina's husband Billy. Billy is an EMT who answered 11 calls on Christmas Eve, including two fatalities. He has also delivered two babies on the job. 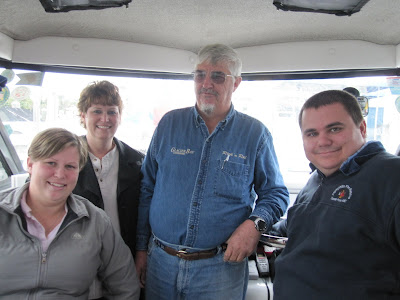 We are still actively looking for a larger boat with the intent of doing the loop again in a few years, so we spent Monday with a boat broker and looked at three boats, one of which is a very good possibility. We have one more we’re going to look at on Thursday. We had hoped to find something up on the Tennessee River, with the idea of buying it and leaving it there to spend several months a year on for the next several years as we cruised the river system some more, then do the loop again. We did make an offer on one boat but that fell through when the boat turned out to have a leaky gas tank. Then we looked at another boat on the Tennessee that is an excellent candidate, but since we aren’t in a rush we decided to keep looking. If we decide to get a gas powered boat, that will probably be the one. But we’d really prefer diesel, so that’s all we’re looking at now.

Today we were joined for lunch by my cousin Lloyd “Skip” Bray, his wife Jane, their delightful daughter Jennie and her friend Bryan. Skip is my daddy’s first cousin. He never lived nearby, so we had very little contact with him when I was growing up, but I’ve been in touch with him and have gotten together with him several times over the past 10 years or so. Skip and Jane live in nearby Tampa. Jennie recently moved back to Tampa after sowing her wild oats in New York City for several years. I think I’m one of only two people that still refer to my cousin as “Skip,” but “Skippy” is what I always heard when I was growing up and old habits die hard…at least I’ve upgraded him to Skip from Skippy! Pictured are Jennie's friend Bryan, Jane, Skip, Jennie and me. A little famiily note: Jennie is the third Jennie in the family, preceded by her grandmother and great grandmother. The name is actually Jennie, not Jennifer.