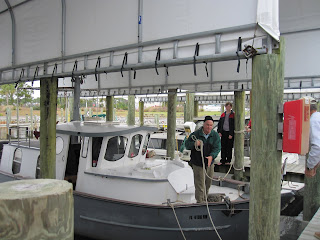 [Betsy speaks again:] First, here’s another picture of “Pearl,” the boat owned by the New Zealanders, followed by a picture of its owner John and the kids Alice and Lloyd. Sorry I don’t have a photo of mom Phillippa yet. Too bad they had all gone to the library and missed the real excitement of the day: a manatee rescue. 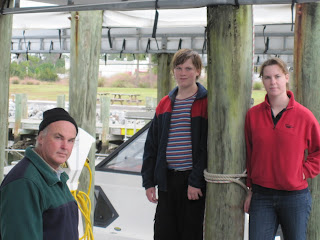 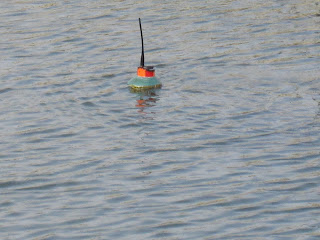 When we first arrived, we saw a floating ball moving through the water. Rick took a closer look and realized it was a receiver of some sort. Being from Topsail Beach, naturally we think of sea turtles! Rick asked a dock hand if the receiver was attached to a sea turtle, and he said no, it was tethered to a manatee that had been under observation and was thought to be sick. We didn’t think much more of it until today. 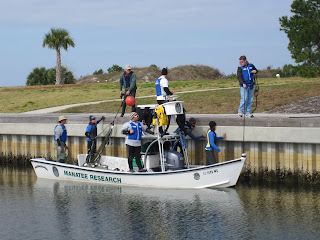 We saw a few people congregating on the dock opposite ours, so we went to see what was going on. There was a manatee rescue boat filled with volunteers in wet suits. They had come to trap the manatee and take him out of the water for observation and to move him to warmer waters. Like sea turtles, they can become cold stunned, and that is basically what was wrong with this guy. As we’ve mentioned, it has been unseasonably cold here for the past week or so.

Below is a series of photos of the rescue. First, they very slowly surrounded him and netted him with a large seine net. He seemed very lethargic 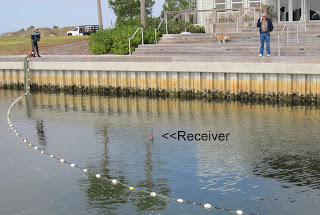 (which I think is normal for manatees) until he came in contact with the net and then he gave a feeble fight, stirring up the water a bit. After a relatively short time, he gave up and they were able to lift him onto the back of the boat with much effort. A volunteer not involved in the physical rescue of this mammal was on the dock answering questions. She said this manatee weighed in at about 1000 pounds when they last had him captured, but it appears he has lost a substantial amount of weight since then (I’m not sure how long ago that was). He was rescued in the Bahamas where they found him to be sickly, 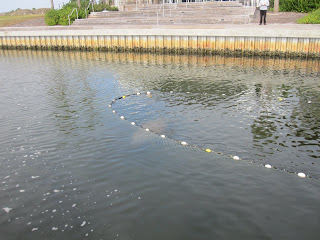 and was transported to Florida because DNA tests showed that he belonged in Florida. He had been released, with transmitter tethered to his tail.

When he was seen in the protected basin here at Port St. Joe someone reported him as being here, and with the extreme cold weather he had become severely weakened. They will transport him to a treatment facility hopefully for just a few days, and then will re-release him farther south in Crystal River. If it is determined that he cannot be released into the wild again, he will take up residence at a zoo that is also a treatment 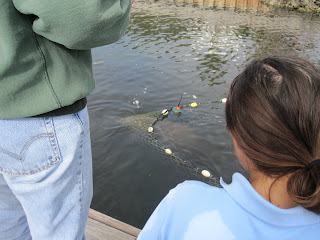 The rescue effort took approximately 20 minutes from start to finish. As soon as they had the manatee on board a veterinarian was checking him with his stethoscope. At the same time, the volunteers were covering him with a protective foil blanket to hold in heat. All were very calm. There was no cheering. The observers were asked to please be quiet.

Take notice of how the boat has been adapted for rescue: the stern folds down flat so they can pull these massive animals on board without having 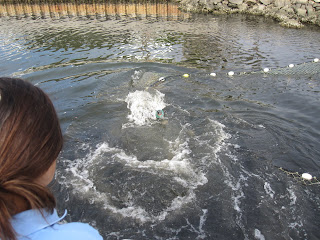 to lift them over the gunwale or transom. Once the animal is on board, it folds back up. The motor is near the front of the boat so as to be out of the way of the rescue effort.

We felt like this was a once in a lifetime experience. How lucky we were to be here to see this so closely! 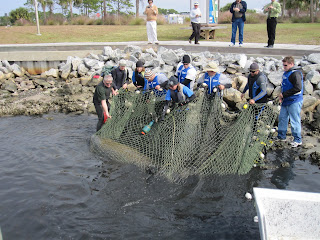 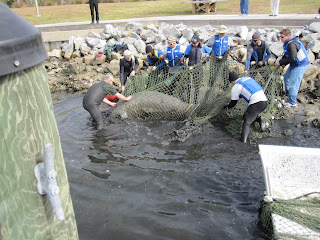 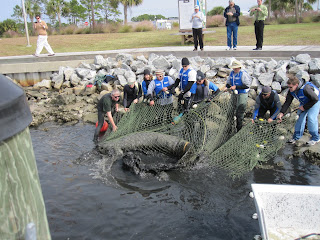 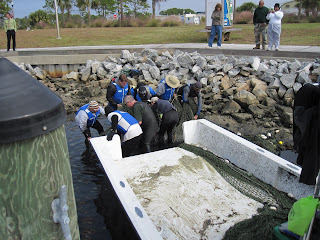 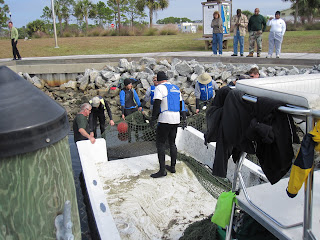 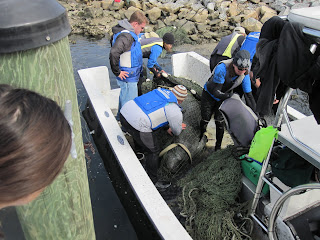 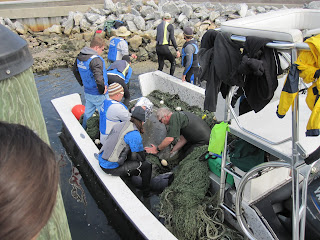 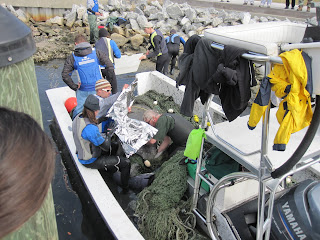 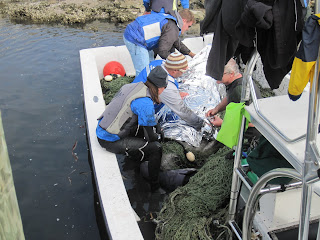 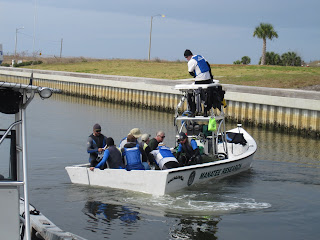 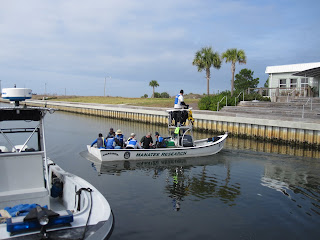