The day before yesterday, the boat next to us was having some work done on it. I was introduced to the repairman, Rudy, and was told he was very good, and best of all, very reasonable. He lives in a boat that he had built and could do plumbing, electrical, canvas, etc. Folks like him are few and far between. We have had a couple of nagging problems and so I asked him to take a look. Well, he spent two hours on Tuesday, made a list of necessary parts and told us he would be back today.

Yesterday, he called and said he had all of the parts and would be here “mid-morning”. 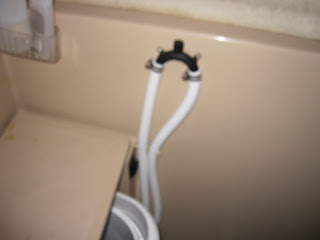 First, we worked on the shower drain pump. Remember that since we are loaded down, the thru-hole for the drain and bilge are sometimes underwater. The problem was that since the floor of the shower and the pump are under water, when the pump was cycled on, a siphon was created and in many cases, we would get more water back in than we pumped out. So, Rudy cut the drain hose, installed an anti-siphon valve, and mounted it ABOVE the water line. Now, when it starts to siphon, the siphon action is broken by the valve as air is introduced into the line. Works like a champ. 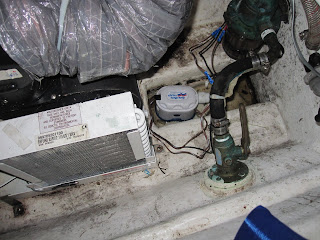 Second, we installed a new bilge pump. Again, since the bilge thru-hole is under water, we sometime got water back into the bilge. In doing so, the pump ran too often and finally quit working. We installed a new pump with the float switch in one unit. The only real problem with the installation is that the pump is about 4 feet below the floor and there is an air conditioner in the same compartment, making it just a little tight. But, we got it in and it works great.

Third, the problem that we initially wanted to solve was addressed. The problem is that on occasion, we get a siphon of water back into the head, filling up the head. While this is not critical, we only have a 10 gallon holding tank, and if we flush a bunch of sea water into the tank, it fills up too fast, and we have to pump out too often. We were going to install a siphon break on the input line. But first, just to be safe, we called Glacier Bay and talked to Scott. He told us that there is a solenoid on the back of the head, and he is 99% sure it is not closing all of the time. It runs with the pump switch and is suppose to close the head intake, when the pump is off. It opens the head when the pump is on. He told us to order a new solenoid from GB and install it. So, we did nothing about the head problem. I will order the part and install it when we get back to NC.

The rest of the day, we cleaned up the mess we have made doing the two jobs. It was too cold to get out and explore, so we stayed in and read and continue our R&R. During the day, Betsy and the New Zealanders were interviewed by the local weekly paper about doing the loop.

We still plan to leave here on Saturday and go to Carrabelle. We discovered that the weekly rate here is a better deal than the daily rate and so that if you stay 7 days, you pay the rate for five. So, we cannot leave on Friday or Saturday as they are the free days. And we cannot turn down free dockage, especially in such a great marina.