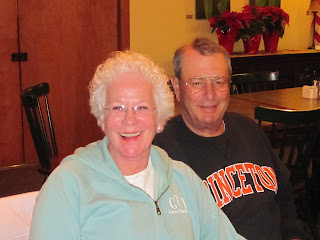 [Betsy speaks] Friday night the Harbor Hosts at Port St. Joe Marina arranged supper for those that wanted to go out to eat together again. This time there were only ten of us, but we still had fun. We were joined by Ann and Hank (pictured left...notice the Princeton sweatshirt. Like us, they have a nephew that graduated from there.) from “Queen Ann’s Revenge” with whom we had eaten a couple of weeks ago when we stayed with our friends Tom and Patsy Conrad near Pensacola; Don and Cheryl from “Cheryl Ann” whom we had met very briefly in Demopolis; Nan and Jack from “Eschaton” with whom we had gone to church last Sunday, and of course Harbor Hosts Patsy and Ray. The New Zealanders are still here but they chose to stay in on this extremely cold night and eat on their boat.

Friday was a miserably dark, dreary, cold, windy, wet day. We are thankful for the nice ship’s store/office at Port St. Joe that has several comfortable chairs, a computer work station, always a hot pot of coffee going, and most importantly on a day like this, warmth and friends!

Today, Saturday, we woke up to more pouring rain, but at least it wasn’t quite so cold. The rain let up mid-morning to just a drizzle, so we decided to move on to Apalachicola. Originally, we had planned for our next stop to be Carrabelle, about 20 miles farther. Several boats had left Port St. Joe Thursday or Friday heading for Carrabelle and it was our intention to join them there. We are all still aiming for a crossing day on Monday. Several of us had gotten together earlier in the week to discuss crossing options. The slowest trawlers will leave Carrabelle in the afternoon, travel all night, and arrive in the Tampa/Clearwater area the following afternoon. We hoped not to have to do that. There was one boat at the meeting that wanted to do a daylight crossing to Cedar Key/Crystal River. But their max speed is about 11 MPH. We had tentatively said we would buddy with them if we didn’t find a faster boat to go with.

Then yesterday afternoon one of that group called and said they had met a boat at Apalachicola that was fast like us and was looking for a buddy boat to make the full crossing during daylight hours. So we contacted that person and we will go with them. They were already in Apalachicola and wanted to leave from there, so we decided to just come there and not go to Carrabelle, which would have made the crossing only about 10-15 miles shorter. 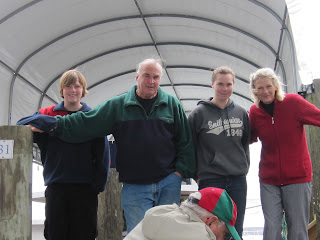 So we hugged our friends at Port St. Joe goodbye this morning and headed out in the drizzle for the easy 25 mile run to Apalachicola, basically in a ditch/canal the entire way. Our New Zealander friends that we had been docked next to all week were there on the dock to bid us good bye. What a nice family they are, and how tolerant they must be to survive on that small one-room boat for such an extended period! They are staying at Port St. Joe a few more days because they have had several calls about their boat that is for sale. 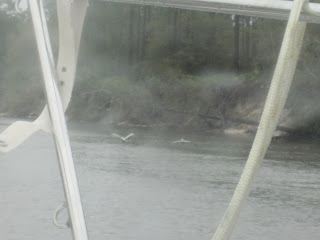 Two pelicans escorted us then entire length of the canal that connects Port St. Joe to the ICW, a distance of about 5 miles. We were doing 21 MPH and they were keeping up with us and in some cases going faster than us with no problem and with very little wing action…just gliding over the water.

Along the way we passed this one time home that we dubbed “Paradise Lost!” Even in the cold and drizzle we passed several bass boats out fishing.

We arrived in Apalachicola, filled our gas tanks ($413.00) so as to be ready to leave early Monday morning and pulled into our slip at Water Street Motel and Marina…basically a motel on the waterfront that has a few slips with power available for transients like us. I think we are the only transients here. After settling in I rode my bike the couple of blocks to town just to see what is here. Most of the stores were closing as it was nearing 5 o’clock. I did find my way to the closest church, a Methodist Church, and we will attend that tomorrow morning.

The boat that we will buddy with on Monday is at a full service marina right next door, and we did stop by there on our way to supper and introduced ourselves in person. Jim and Carol Bassett are on a 40 foot Cruisers Yacht named “Lady Liberty.” They can cruise comfortably at 25 MPH or more, but will slow down a tad so that we can keep up with them at about 22 MPH at first. As we burn off fuel, we’ll probably go a little faster. Fuel economy can’t be an issue when you’re trying to do 170 miles in daylight hours! As long as our fuel management system says we’re getting 1.25 miles per gallon or better, we’re going to go all out! We need to get 1.25 to make sure we don’t run out of gas. We hold 190 gallons, but can’t get to the last 20 gallons! 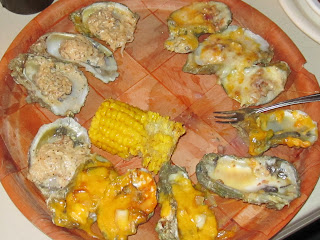 Apalachicola Bay is famous for its oysters, so tonight I ate oysters for dinner and they were delicious! I had never had smothered baked oysters before, but I’d gladly have them again! I had a dozen, and had them smothered in three different ways. Tonight was the last night the restaurant is open for this season, so I’m really lucky to have had this opportunity!

As we returned to our hotel/marina I took a picture of their Christmas Lights. Who can believe it’s only a couple of weeks away! 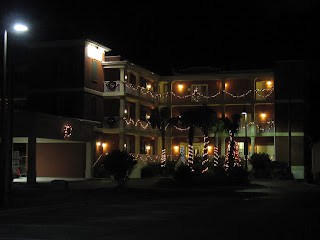