We realize we’re a few days late with the blog and apologize to those of you that depend on having it with your morning coffee. As we say on the boat…”It ain’t fatal, so get over it!” 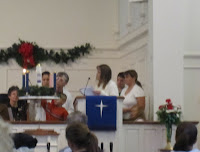 Sunday we drove the 50 miles or so to Zephyrhills to visit close friend (and ex-sister-in-law) Tina Johnson and her family. We met Tina at her church, First United Methodist in Zephyrhills, for the 9:30 contemporary service. This was another beautiful church, and I realized as the Advent Candle was being lit that we haven’t missed church a single time during Advent. We really didn’t plan it that way, but I realized today as the candle was being lit that this is the fourth one we’ve seen. How special it is to see the different children in different churches taking part in this ceremony 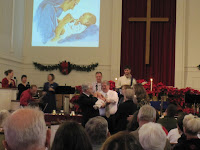 This Sunday there was also a baptism, which is always special. As we’ve grown accustomed to in the past several years, the minister walked the tiny baby up and down the center aisle after the baptism. How special!

As mentioned, this was a contemporary service, similar to the one we went to last week in Apalachicola, with praise singers with microphones, words on a screen in front of the church, etc. I must admit I missed singing the traditional Christmas Carols which we would have sung at either the 8AM or 11AM traditional services. But we did enjoy the minister and his message.

After church we went with Tina to a restaurant for brunch, and were joined by her older daughter Trina. Last time we saw Trina she was a feisty teenager. Now she is happily married and we look forward to meeting her husband later in the week. Following brunch we went to Tina’s condo where we were visited by her mother Mollie.

Following a wonderful visit with these friends we drove back to Clearwater. We plan to get together with them again Wednesday night in Tampa, where Tina’s younger daughter Tara works. And we’ve been invited to join them for their big Christmas Eve celebration at Mollie’s house. We’ve been with this crowd for Christmas Eve before many years ago and remember what fun we had. 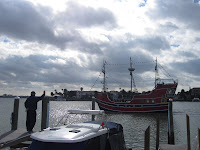 Monday was just spent lounging around the marina. I finished reading a great book, and we had dinner with friends. We really like it here, other than having to climb up off the boat when the water is low. There is a lot going on with tour boats coming and going all the time. This pirate boat goes by several times a day, and we always wave at the passengers.