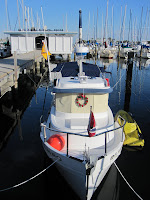 [Rick] Today was a very wonderful day, with one bump. We had talked to our looper friend, Maurice McGough, and agreed to have dinner with him at his club in St Petersburg. Maurice is the person that did the loop, by himself, in the 21 ft Ranger Tug called Quotidian. We were to meet him at 1800 in St Pete. We first met Maurice at the AGLCA rendezvous in Charleston in the spring. We then met him again as we entered Canada in early July. He is one of our favorite people from the loop.

Before leaving for St Pete, we went to the bike shop to retrieve my bike. I had taken it in for a flat tire. They were to also replace a brake cable and adjust the brakes. When we go to the shop, the tech indicated that he had change the tire, but now, the rear wheel will not turn, forward or backward, when the gear is engaged. It worked when I took it in, now it does not. Weird. After looking over the situation, we ordered a new wheel. The total cost will still be about $50, but I will not have a three speed, I will have a one speed bike. Remember, we only paid $50 for the bike, so I did not want to spend too much to repair it.

We got to St Pete about 1400, with the intent to “look around” before meeting Maurice for dinner. Maurice was at this boat, Quotidian, when we arrived so he walked around with us for a tour of the municipal marina. We looked at several boats, visited the ships store, etc. This is a huge marina, over 650 slips. 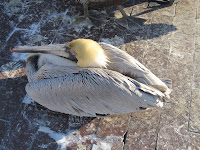 When we left Maurice to walk around by ourselves, we visited the famous St Pete Pier. This very old pier, dating back to 1926 in various incarnations, houses an aquarium, several bars, several restaurants, and some specialty shops. On the way in, we passed some pelicans on the sidewalk. They are so used to humans that they do not even run off when approached. Once in the Pier, we took some skyline pictures. 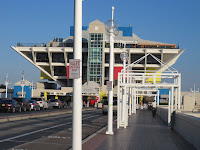 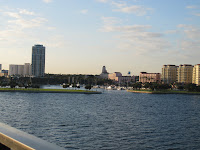 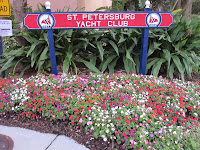 At 1800, we met Maurice and walked to the St Petersburg Yacht Club for dinner. The building, huge and beautiful, was filled with at least 100 well decorated live Christmas trees. The meal was very good, and the prices were very competitive with any good restaurant. Since Maurice has just completed the loop, we reminisced about our time together in Canada and the other places we were together on the trip. 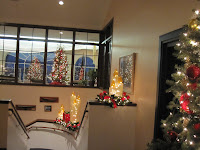 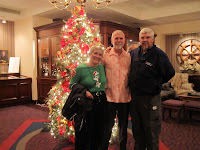 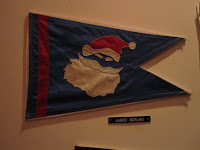 Members of the Club have burgees created for themselves and they are displayed all over the club. This one was very appropriate.