[Rick] We travelled about 73 miles today from Green Turtle Marina to Pebble Isle Marina. It was a very easy ride. The day was very overcast and it did rain for a very few minutes while we were underway, but seas were smooth and there was no thunder or lightning. AND we did not leak (although there was not enough rain to really tell). The current is against us, but it will not stop the Rick ‘N Roll now that we’re back up with both engines. We dropped off a couple of gallons of gas to Meander for their dinghy. They had spent the night anchored in a quiet cove off the river.

The best thing about the trip is that the throttle is fixed. It moves so easily. We had no idea it was so hard to move until we got it fixed. I guess it is like eyesight. You do not realize your vision is diminishing until you get glasses or contacts. 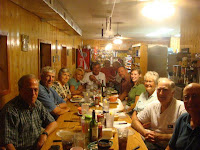 At Pebble Isle, a very small marina, they have a floating restaurant/ships store building. We and 12 of our friends from other looper boats had supper there. It was great. Very inexpensive. They served fried mushrooms and fried pickles, complimentary. Then, after the meal, they brought around a huge sundae and spoons for everyone to have 2-3 bites for dessert. We were told to be back in the morning at 0830 for hot, homemade cinnamon rolls ……We cannot wait and will probably not sleep a wink. 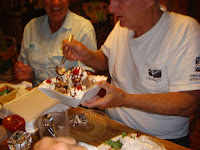 We continue our trip UP the Tennessee River, even though we are traveling South. We are heading to Chattanooga and a visit to the Legendary Delta Queen.