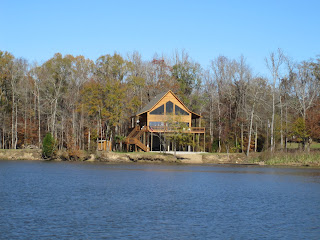 Betsy speaks: We departed Aberdeen Marina this morning still heading south on the Tenn-Tom Waterway. After slowly navigating our way back out of the marina’s spooky channel, we immediately went through the Aberdeen Lock, then 23 miles later through the Stennis/Columbus Lock. There was no other traffic on the waterway today, so we didn’t have to wait for the locks at all. It was a beautiful sunny day, bordering on being almost hot. What a delight after several dreary days.
Since we had spent several days in Columbus, MS, previously on a Delta Queen cruise we didn't need to stop there. Columbus is known to have many beautiful antebellum homes, and we had visited most of them a couple of years ago when the Delta Queen hit a stump and was laid up for days for repair right nearby.

Early afternoon we pulled into Pirate’s Marina Cove, for a total distance of 52 miles. We would liked to have gone farther, but the next marina is through 2 more locks and 90 miles away, so we would not have arrived until well after dark. 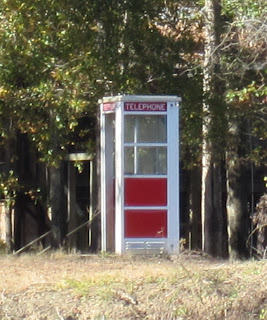 The waters we’ve travelled the last several days are getting pretty boring. If you like being in the middle of nowhere and communing with nature, this would suit you. We did see a raccoon swimming along one day, and we’ve seen many blue herons and a few hawks, but nothing real exciting. You go for miles before seeing a house, and then what you see can range from beautiful to depressing. A couple of unexpected things we saw today were an old telephone booth out in the middle of nowhere, right on the waterway’s edge, and a house with a totem pole in front of it. 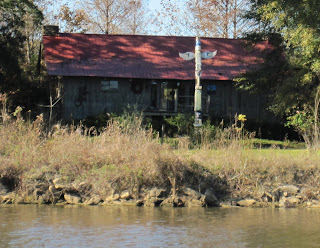 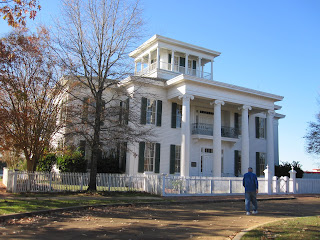 We arrived at the marina in time to visit the nearby Tom Bevill Visitor Center, so let’s talk about government waste for a minute. Tom Bevill was a Congressman representing Alabama from 1966 to 1995. He was head of the Appropriations Committee from 1977 until 1995. During that time he was generally well liked by the people of Alabama, and he was instrumental in the development of the Tenn-Tom Waterway. But this visitor’s center, which is basically a monument to him, is really over the top. It has the appearance of being a beautiful antebellum home in the Greek revival style. And if it were truly an antebellum home perhaps it wouldn’t 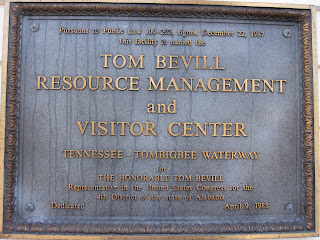 have struck me as being such a waste of money. But it was actually completed in 1985. Nowhere did I see how much it cost to construct this building, but it must have been ridiculously expensive, and it makes me mad that it was paid for with federal dollars. There are some nice exhibits inside, but those same exhibits could have been put in a much less expensive structure. There are plenty of true antebellum homes in the south, so I just don’t see the point in spending so much money to build a replica.

Off that soap box, I must say that the US Snagboat Montgomery, which is on display right next to the mansion, was well worth the visit. It is an old steam powered sternwheeler that was built in 1926 and retired from service in 1982. With its huge boom on the front, it was used to clear debris from the waterway. Visitors are now allowed to walk all through the boat, seeing the crew’s and officer’s quarters, the galley, the pilot house, etc. It was fascinating, and reminded me of the Delta Queen on which we have travelled many times. 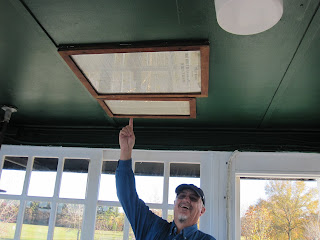 One thing we laughed at on the boat was the placement of the Navigation Rules. I’m sure they were required to be prominently displayed on the boat, just as they are on commercial vessels today. But on this boat, the “Rules of the Road” were the “Rules on the Roof” as you can see in the picture where Rick is pointing at them mounted on the ceiling!

Pirate’s Marina Cove is much like yesterday’s Aberdeen Marina…like a step back in time. The office is an old trailer. The courtesy car is an old van with well over 200,000 miles on the odometer and no shock absorbers! We took the car into nearby Pickensville for dinner at the only restaurant, named “Down Yonder.” They specialize in pork ribs, and the motto on the waitperson’s shirt read “Get your butt Down 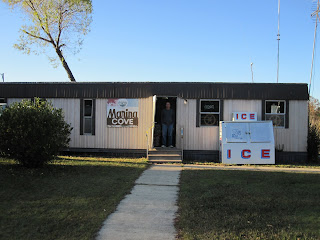 Yonder.” At least 90% of the patrons were in camouflage, including the little boy who was telling everyone about the lizard tails he had broken off in the last few days, and the mice that ate the toilet paper in his house. Someone asked him if he had shot a deer today, and he said no but he had kilt two rats. Oh how we fought to keep from laughing out loud!

We have no plans for Thanksgiving. We’ll probably just eat a peanut butter sandwich as we head downstream toward Demopolis tomorrow. This is when we’re sorry to be so far behind our friends that got ahead of us when we went home. I’m sure other loopers are having Thanksgiving together, although many have gone home to be with family. To those reading this we hope you have a Happy Thanksgiving, and eat an extra serving of turkey for us…with lots of gravy and stuffing. I don’t remember ever not having Turkey and Pumpkin Pie on Thanksgiving Day before. But we are truly thankful this year to be taking this wonderful trip which has gone so well so far!