[Rick] Yes, the title is correct. We left the boat in Rogersville Al, rented a panel truck, loaded about 700 lbs of “stuff” into the truck and off the boat, and made our way to Sneads Ferry on Thursday and Friday, October 29-30. We had planned this break from the beginning. We attended the rendezvous at Wheeler State Park, left the boat there, and headed home.

Our purpose for coming home was multifold. It is election day, the 50th anniversary of the New River Sail and Power Squadron, our friends from St Andrews coming to the beach cottage, and a myriad of other things. Plus, it is a nice break and a chance to recharge our land batteries. We knew it was time to come home when we began to say “over” at the end of every sentence while talking on the cell phone. 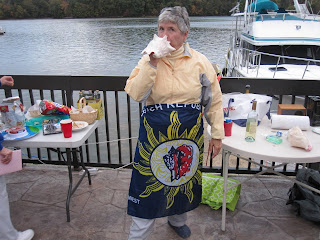 We do have some news. On Saturday October 24, at the informal get together, Betsy won the conch blowing contest, and was awarded the flag of the conch Republic, a nickname for the Florida Keys. 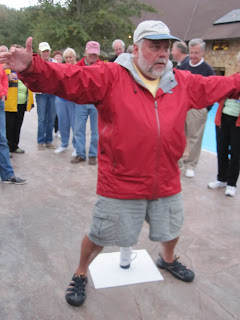 One other fun game was “Buttdarts”. This picture will tell you all you need to know about dropping a quarter from between your butt cheeks into a cup, scoring points.

We did attend the 50th Anniversary party for the NRSPS. It was held in Susan Kleinfelt’s home. About 55 people were present and we elected new officers. As the Squadron Chaplain, I got to give the invocation.

We plan to be home for about two weeks, returning to Alabama around November 18. There will be no further postings until that time. Join us as we take a break from the trip and recharge your batteries. Over…..