Betsy speaks. We woke up to a cold and rainy Sunday morning. Knowing we had three locks one right after the other to go through, we waited a couple of hours for the rain to let up. Obviously, when locking at least one person has to be outside getting wet if it is raining. Usually that person 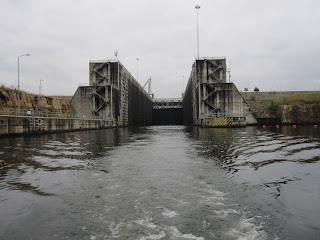 is the female, since usually the male is the one at the helm. Fortunately for me, we do things backwards from the way most people do it! From very early on I have been at the helm for all locking and most docking, which means Rick is the one getting wet! I really don’t understand why more women don’t pick up on this. Handling the lines is a messy and often difficult job. You have to have quite a reach to put the line over the floating pin or bollard, or you have to be good at lassoing the thing. It is the major complaint you hear from women at our round-table discussions at AGLCA gatherings.

Anyway, by about 10:30 the rain seemed to have stopped for the time being, so we called the lock to see if we could get on through. After heavy barge traffic yesterday, today was very quiet, and we had no wait at all at any of the locks. So we made our 100th lock-through for this trip on the 84 foot Jamie Whitten Lock. If we had not taken the side trip up the Tennessee River and gone through the 95 foot Wilson Lock, this would have been the highest lock on the Great Loop route. The lock masters on the Tenn-Tom are very friendly, and we thanked this one for a smooth 100th ride. Seems like all these guys took their training at from the same person, because at all three locks today any affirmative they gave was a cheery “Roger, Roger!” 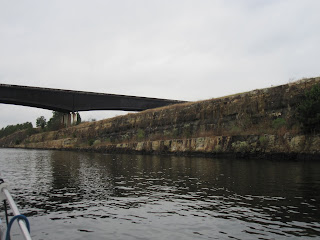 Leaving the Whitten Lock, we realized that this is the part of the Tenn-Tom that is actually a ditch that was dug through the middle of a cornfield. We had heard that the locks were built first, leaving this huge concrete structure apparently in the middle of nowhere, then the ditch was dug, then they flooded the area creating the waterway. This picture shows the earthen sides of the ditch.

Since the weather was so lousy (even though the rain had mostly stopped it was still wet, dreary and a very cold 59 degrees) we decided to pull in at Midway Marina in Fulton, MS, for the night, 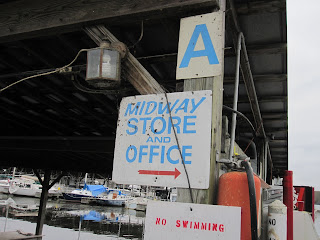 arriving about lunchtime after a total distance of 19 miles. At least here we have internet and cable TV, which we didn’t have last night.

Tucked back in a swampy cove amongst many seemingly dead trees, Midway is like a step back in time. Most of the permanently moored boats here are old and run down. Many seem to have people living aboard. Most are old houseboats. The docks are stationary instead of the floating docks to which we’ve become accustomed. But the people are very friendly and the facilities are exceptionally nice, including a lounge area with sofas and TV, a table set up for jigsaw puzzles of which they have a huge collection, many games, tons of books in the book exchange, and a large selection of VHS movies for you to borrow for the evening. They also have a hot tub available for use, and a nice lake. The restaurant was only open for lunch today, so we didn’t get to give it a try. 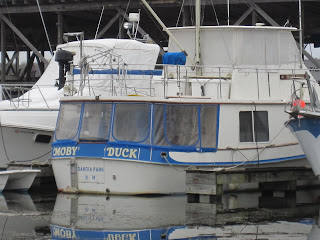 As I’ve said before, often I am amused by boat names, and I thought the name “Moby Duck” was cute, so I took a picture. As it happened, the owner of Moby Duck approached us later and introduced himself, saying he had been reading our blog regularly! He had done the loop a couple of years ago on a boat similar to ours in size, and decided he wanted to do it again on a larger boat (sort of like us!). So he bought the Moby Duck and hopes to do the loop a second time in a couple of years. We are often surprised and pleased at the number of people reading our blog, especially when it is a stranger that we then get to meet. 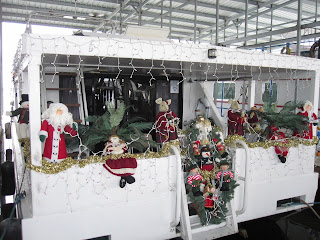 We took the courtesy car for dinner and made a quick stop at Wal-mart. Then came back and enjoyed walking the docks and admiring the Christmas decorations. Yes, it seems early in the season, but most of the boats are already decked out with Christmas lights. They have a contest amongst local children’s groups for the best decorations. This seems to be a very active marina. Last night we missed a huge “hobo feed” complete with band. On Thanksgiving they will have a marina wide Thanksgiving dinner with everyone signing up for a dish to bring.
Tomorrow,we look forward to more locks and more southbound travel through the ditch… 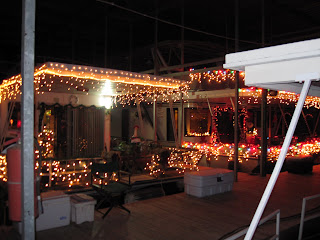 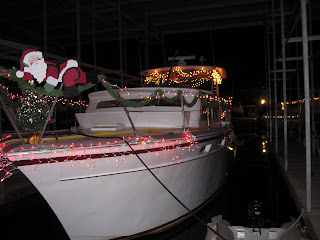 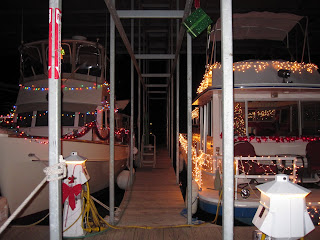 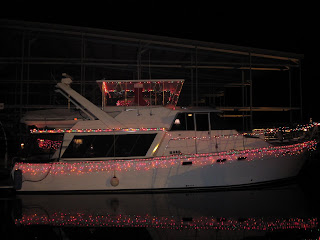